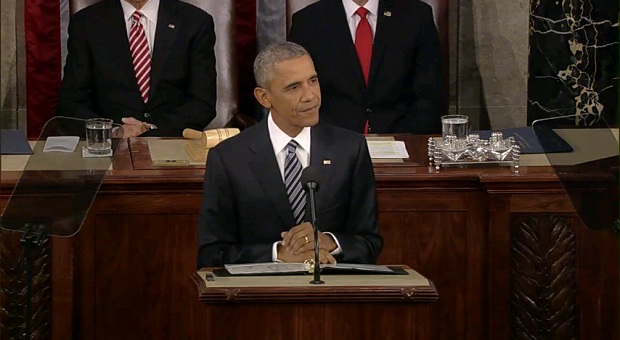 What Obama’s State Of The Union Address Is Missing

On Tuesday, January the 12th, President Obama gave what was his eighth and hopefully last State of the Union Address (SOTU). I say “hopefully” because it is traditional for the outgoing president to leave the SOTU for the incoming president. But as we all know, Obama doesn’t care about tradition, especially when it comes to a chance to talk about himself and how great he is.

As expected, this SOTU address was a mixture of lies, half-truths and liberal talking points. He even threw in his standard lecture for the American people, about how bad we are. This time, it was about how badly we treat Muslim immigrants, one of his favorite groups of people.

It is becoming increasingly clear that the president is out of touch with the American people. He keeps talking about the huge majority of people who agree with him, while poll after poll show that the people aren’t.

But then, when the only people you listen to are those who agree with you; it looks like everyone is in agreement with you. After all, this is the president who said that he heard the voice of the people who didn’t vote, so as to have an excuse to say that his viewpoint was and is the prevalent one.

Ever the politician, Obama talked about how great the country was doing. I guess that’s to be expected, not only because the Narcissist in Chief has to make himself look good, but also because any president would want to paint a positive picture of the country. Who cares if the picture painted looks like some other country, as long as it conveys the message that liberal ideology is the correct ideology.

But in talking about how great the country is doing, he avoiding mentioning some important points. That same day, 10 Navy sailors were captured by Obama and Kerry’s buddies in Iran. He didn’t even mention them, insulting everyone in uniform, once again.

Then there was the lack of mention of Islamic terrorism, which has already invaded our country and is on the rise. Over 100 Muslim terrorists have been arrested here in the United States in the last two years, most before they were able to act.

Yet according to the Liar in Chief, there is no such thing as radical Islamic terrorism. He’d rather lie to protect his friends, than protect the people he’s sworn to protect.

So, What Did He Really Say?

To start with, Obama spent a considerable amount of his address talking about the economy. He actually went so far as to say, “Anyone claiming that America’s economy is in decline is peddling fiction.” That was an amazing statement and a very carefully crafted one as well. While it is technically correct that the economy is growing, it is growing at the slowest rate since World War II, or perhaps even before.

We all know that the official unemployment rate no longer means a thing, yet Obama keeps pointing to it as an indicator that our economy is improving. Unfortunately, all that number means is that less people are receiving unemployment today, than were receiving it five years ago.

The workforce participation rate is still on the rise. That’s a much more accurate indicator than the unemployment rate. Not only that, but a large number of the people who are working are underemployed. Obamacare has ensured that many people who need to be working full time are unable to work more than part time.

While not all the failure of the economy can be justly laid on Obama’s doorstep, a fair portion can. Much of the lack of recovery is due to three things, all of which are his fault. The first is the uncertainty about the economy which his administration has fostered. The second is businesses moving overseas, caused by the massive number of regulations Obama’s administration has created and the high corporate taxes they are taking from businesses. Finally, we have to thank Obamacare, which has single-handedly managed to reduce millions of people’s work week to 25 hours, when they were working 40 hours before.

His other great talking point about the economy is that he’s succeeded in cutting the deficit by almost three-quarters. Once again, this is a masterfully crafted statement. He’s not talking about the national debt, but the amount that the national debt increases each year. Compared to his first year in office, the budget for 2016 is three-quarters lower. But it’s still too high. Our government is still spending more money than they are receiving. So this figure doesn’t mean a thing.

Of course, Obamacare alone has been a huge negative influence in our economy. While millions of low-income people are now receiving Medicaid, who didn’t receive it before; other millions of people have lost their health insurance. Companies just can’t afford to pay the high premiums under Obamacare, so they are dropping insurance benefits.

The typical fast-food restaurant has more than 50 employees. These establishments run on a small margin, depending on volume to make a profit at all. But according to Obamacare, if they have 50 full-time employees, they have to give them health insurance. The answer? Cut their hours so that they can cut their benefits. If they don’t, those restaurants will be forced to go bankrupt, as their costs will be higher than their income.

But, liberals are blind to this. They say it’s the company’s fault and not Obamacare’s. That allows them to punish those businesses, demanding that they pay a $15 minimum wage. Sadly, the losers will be the poor that they claim to be trying to help.

So much for economic recovery.

We couldn’t have a speech by Obama, without him talking about his favorite subject; climate change. He actually bragged about the great strides that have been made in clean energy. It’s amazing that he would even mention that, reminding everyone of his first failure, giving millions of dollars to Solyndra and other failed green energy companies. Yet in Obama’s eyes, he’s succeeded.

Any improvements that have been made in energy costs have been made in spite of Obama, not because of him. He’s the one who single-handedly stopped the Keystone pipeline project, after sitting on it for seven years. Our current energy boon isn’t from clean energy, but from fracking, a technology that he is against, and may actually be causing an increase in earthquakes.

Hey, I’m a fan of green energy, but it isn’t working. Until some cost-effective means of storing large amounts of electrical energy can be found, it won’t. I don’t care how many solar panels you build and how many windmills you construct, they aren’t a reliable source of energy 24/7. That means that other, less environmentally friendly means of energy production have to be in operation, ready to take up the slack when wind and solar don’t work. What are those? Coal; Obama’s enemy.

We don’t need to spend money on propping up the green energy industry, we need to spend it on energy research. Maybe then, they’ll be able to find a way of making solar panels that are efficient and developing a realistic means of storing that energy.

The day of green energy has not come, regardless of what Obama says.

I could go on and on with Obama’s lies, but let me mention one more thing. According to his SOTU address, the US led coalition has become victorious over ISIS. No, we haven’t! Our coalition is a joke, with the vast majority of the members only providing some relief to the people in the area or merely condemning ISIS. The people with boots on the ground; the Kurds, the Jordanians and now the Russians, are the ones who are winning that conflict. If anything, Obama is supporting ISIS, not destroying it.

Obama claims that we are stronger than ever and that our military is respected around the world. How would he know? He hates the military and has used it as a great social experiment. Today’s military is full of homosexuals and transgenders, as an experiment is seeing how they can be force-fed into society.

Standards are being lowered for combat roles, allowing women into military specialties they couldn’t enter before. While that is a great victory for gender equality, it has come at the cost of reduced combat effectiveness.

Hey, I believe in equality, but if a woman can’t meet the physical requirements of the job, then lowering the standards just increases the chances of her being killed. Not only that, but it increases the likelihood of those they serve with being killed as well.

Is this a correct price to pay? Should women’s rights trump the right to life? I can’t see any morality in forcing men to die, so that women can occupy positions that they aren’t physically strong enough to occupy. That doesn’t make sense. Let them serve in other capacities, but don’t drop the requirements in the name of women’s lib.

Sadly, our military is the weakest it has been since the Vietnam War. Between using it as a social experiment, cutting the military’s budget in order to have more money for social welfare, putting women in places they don’t belong and firing over 200 generals and admirals, Obama has gutted our war-fighting capability. Maybe we’re still the strongest kid on the block, but we’re not as strong as we once were.

The real cost in this will end up being the lives of those who serve in uniform. Since other countries no longer respect our military might, they won’t hesitate to use theirs. That will end up putting us in the place of having to fight, or if not to fight, then to capitulate. When that fight comes, the losses of US servicemen and women will be higher than it should be; simply to satisfy the Narcissist in Chief’s hatred of our military.

There is much to hate in this SOTU address and even more to make us sad. Yet, Obama only has one more year in office. Unless he declares martial law and suspends the election, he will leave office next January.

Then, whoever takes over, will be faced with the biggest job of rebuilding this country has ever faced. Pull up your trousers and roll up your sleeves, the time to work at restoring our nation is coming soon.