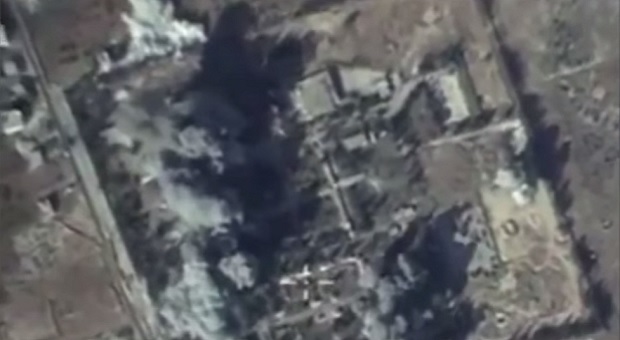 How The Russian Bear Mauls ISIS

It has been less than two weeks since Russia announced their entry into Syria to support President Assad. Yet, in the short time they’ve been there, they’ve accomplished more than U.S. forces have accomplished over the last several months.

Reports are coming out that ISIS is ready to topple; all that’s needed is a push from ground forces.

This is somewhat reminiscent of both Gulf Wars, where U.S. led forces all but destroyed the fighting capability of Iraq from the air. Then, when the ground forces rolled in, they were doing more of a clean-up operation, rather than fighting a full-scale war.

But There’s One Big Difference…

There are no ground forces waiting to roll into the areas controlled by ISIS and do the mop up operations. That’s because the U.S. led “coalition” isn’t much more than a paper tiger. Rather than having boots on the ground, President Obama has opted for remote control warfare, rather than relying on proven tactics that can ensure victory.

In fact, many are questioning whether Obama truly wants victory against ISIS. One of those questioners is Vladimir Putin, the President of the Russian Republic.

Putin politely ridiculed U.S. strategy in the area, in the same news conference where he made it clear that as far as Russia is concerned, the existence of ISIS and their armament is the fault of the United States. More specifically, he lays that failure at the door of the White House.

While he still claims to be a Christian, his actions seem to support radical Islam and to be consistently against those who call themselves by the name of Christ, regardless of their denomination. This has led many to believe that Obama seems to be more Muslim than Christian.

Obama’s support of ISIS has included providing them with arms. Oh, he hasn’t openly provided them with arms, but he has provided the arms. Those arms, funneled through other insurgent groups, have made their way into the hands of ISIS warriors.

Vladimir Putin has claimed that ISIS fighters are nothing more than mercenaries, who were armed by the U.S. in an attempt to depose President Assad. Being mercenaries, they left the groups they were working with and joined ISIS, simply because the backers of ISIS offered them more money. The lack of forethought on the part of President Obama and the U.S. State Department made this possible.

Arming rebel forces is always dangerous, something we’ve seen over and over throughout American history. While these operations are normally covered up in a blanket of secrecy; there are many stories of the CIA arming rebel groups, in order to depose leaders that the U.S. government didn’t agree with. In all too many of those cases, the rebels ended up being worse for us than those they replaced.

Cuba comes immediately to mind in this regard. Supposedly, the CIA was responsible for arming and supporting Castro, not realizing what his vision of utopia looked like. That backfired, putting a communist governed nation just a few miles off our shores.

Getting back to ISIS, it’s clear that the guidance from the White House has made it nearly impossible for U.S. armed forces to have much of an effect there. Reports have come out from the military that targets have to be approved by our political leadership, much as they were during the Vietnam War. We should have learned back then that when targets are selected for political reasons, they don’t accomplish military objectives.

Even though we’ve been bombing ISIS for several months, the number of sorties allowed has been severely limited. I’ve heard reports of only two sorties per day. Between that and the political approval required for all targets, it sounds like someone is trying to thwart the efforts of the military.

So, what we’ve had is a show of force or maybe an air show, rather than a concerted attack against a dangerous enemy. An enemy who is beheading people almost daily and posting the videos on YouTube for all the world to see. If America still stands for the things we used to stand for, that should be enough to push us to wipe them off the map.

The Russian Coalition Takes Over

Yet, instead of us wiping them off the map, we are sitting on the sidelines, watching Russia do so. With somewhere around 70 sorties per day, as well as cruise missile attacks from her warships, Russia has done more damage to ISIS in a short time, than the United States has done in months.

But Russia has made it very clear that they are not in Syria as part of the U.S. coalition. They are specifically there at the invitation of President Assad. As such, they have formed their own coalition, consisting of Syria, Russia and Iran. This coalition isn’t just interested in destroying ISIS, but also all rebel organizations within Syria, even the ones which have been backed by the United States.

There are reports of Russian ground troops preparing to enter Syria and attack the insurgents, doing the mop-up operation that NATO forces aren’t doing. If this happens, the destruction of ISIS will clearly be a Russian victory, not an American one.

While the Russian bear has been mauling ISIS and other insurgent groups, it hasn’t been without a price. So far, four cruise missiles, launched from Russian warships have fallen short, landing in Iran, rather than hitting their intended targets in Syria. There is no news yet of how much damage those missiles have caused, whether there were any civilian casualties or Iran’s reaction to the error. While it could be seen as an act of war committed by the Russians, the existing coalition may mitigate that interpretation.

The Russian coalition has much farther reaching implications than just protecting the existing government in Syria. By entering into a coalition with Iran, commonly known for being an aggressive, rogue nation, Russia is strengthening her ties with the Iranian government. Considering the recent nuclear agreement brokered by Obama and Kerry, the implications of that coalition could be huge.

While Russia might not openly condone such an attack, they could quietly and privately support it. Either way, they stand to gain greatly by it. For decades, the Soviet Union and the United States were the world’s two superpowers. Then, with the fall of the Iron Curtain, we were down to one. But in the ensuing years, China has gained in strength; both militarily and economically. So today, with the resurgence of Russia, it could easily be said that there are three.

Of those three, Obama is doing everything he can to remove the United States from the equation. Socialist policies and massive regulations are destroying commerce, especially manufacturing. He has drastically cut military spending, while using the military as a social experiment in integrating homosexuals and transsexuals into the military. At the same time, he has wavered uncounted times on foreign issues, sending an unclear message to the world.

With the United States on the decline, Russia is poised to become the new world leader. The big question is, what type of leader would they be? The old Soviet Union was very imperialistic, working overtime to spread socialism around the globe. What message will this new Russian Federation preach to countries who seek their aid? Will it be one of good or one of evil?

It is clear that there is no turning back for Russia. They have invaded Syria, at Syria’s request and are not likely to back out anytime soon. Russian media is backing Putin, unlike American media which has almost always been against United States involvement in other countries. So Putin has the country behind him, something the next U.S. president won’t be able to count on.

We could be seeing a major shift in world power, playing out right before our eyes. If so, Obama will have truly accomplished the “fundamental change” he promised. I just wonder if the world that emerges will be the world that he wants.