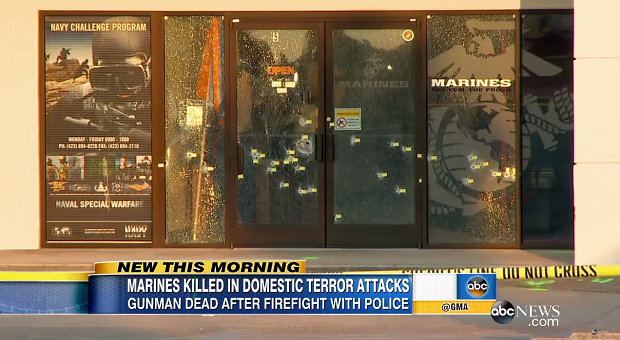 Once again, we have another shooting filling the news. No, this wasn’t some loony-tunes going nuts in a gun free zone, this was a clear act of Islamic jihad. Only this time, the FBI beat the president to the punch, calling it an act of domestic terrorism, before the president could call it another act of “workplace violence” or some other name to hide what is really happening.

There is no question that our nation is under attack by radical Islam and this is just the latest attack in that process.

But you wouldn’t know that’s what’s happening by what is normally stated on the news. While there have been numerous very public killings by Muslims in the last few years, they have all been written off to other things; most commonly, workplace violence.

But when a follower of Mohammed kills someone, it’s not because of the normal reasons associated with workplace violence. There might be anger involved, (the normal cause of workplace violence) but it’s anger fueled by their religious beliefs, by perceived attacks against their faith or people not being willing to accept their faith; not by personal slights.

Of course, they take anything against their faith as being a personal slight, but they answer it out of their religious convictions.

In this case, the shooter was a young man who emigrated from Kuwait, a predominantly Muslim country. Although a naturalized U.S. citizen, being a Muslim means that his greater loyalty is to Islam, not to his adopted country.

There is no question about the killer, Muhammad Youssef Abdulazeez being Muslim either. In a recently started blog, he talks about the need to separate those who are going to paradise from those who are going to hell. In another story, he relates a Muslim parable. So by his own writings, he makes it clear that this was an attack made in the name of Allah, and not for any other reason.

What is still unknown is whether he was a lone gunman or there were others behind his actions. While Abdulazeez did the shooting alone, there is still the possibility that he is connected to one of the world’s terrorist organizations or that he was being motivated to take that action by one of those groups.

ISIS has called for attacks against the United States during their month of Ramadan. This prompted the FBI to issue warnings about potential attacks over the 4th of July weekend. While those attacks never materialized, there is still the possibility that this attack is related to that call for action. Therefore, one of the things investigators need to do is to search for a connection between the shooter and terrorist organizations.

It’s a known fact that terrorist organizations use the internet to recruit potential member. They use websites to feed the discontented, giving them a feeling of belonging and inviting them to adopt a warped version of radical Islam. While recruiting members to join the terrorist organizations overseas, they also try to recruit potential “lone wolf” gunmen and bombers to work here in the United States and in Europe.

While this activity is known about, it is virtually impossible to shut down. The websites are hosted in countries that have poor internet security and even countries with a large, active Muslim population. So, finding and prosecuting these sites or shutting them down is out of the question. The most that our law enforcement officers are able to do is monitor them and see what information they can gather.

When we look at this recent shooting and some of the other acts of violence perpetrated by Muslims, we have to ask the question of whether they have had contact with these websites. Of course, even if they have, it’s unlikely that the FBI would let that information out, as doing so would be detrimental to the security of their investigations. It could even lead to others finding those sites, breeding more potential domestic terrorists.

It is clear in our modern world that we are living in times of jihad. Some have called this the third jihad. Muslims are using a variety of means to expand their influence around the world. Much of this is through legal means, but a portion is through acts of violence.

The Muslim extremists worldwide have learned how to use our freedoms against us. They come to the United States and to Europe and play on liberal sensibilities, claiming that they are being discriminated against. As with most groups that claim discrimination; the cases they use are manufactured to make mainstream America look bad. Their goal isn’t equal treatment, but special treatment. Even worse than that, it’s implementation of Sharia Law.

Amazingly enough, liberals support the Muslims, even though implementation of Sharia Law would see many of them killed. They refuse to see the reality of what this part of the Islam is and the danger it is to the freedoms we all hold dear.

Yet Sharia Law is even more constricting and controlling than the worst of laws proposed by liberals. Were the Muslims to be successful in implementing it here in the United States, it would make many things illegal, such as: homosexuality, adultery, movie theatres, alcohol, night clubs, bars, fornication, women driving cars, pet dogs (Muslims hate dogs), women dressing as they see fit, all other religions, the celebration of Valentine’s Day, dating, bacon and music being taught in school.

Some moderate Muslims have tried to say that they have no intention of forcing their religion on others; but the voices of these Muslims is drowned out by the vast throng of other Muslims who is shouting “Jihad!” at the tops of their lungs. Even those who aren’t willing to take part in acts of violence themselves are often all too willing to support those who do.

This may seem simplistic, but you rarely see any Muslims speak out against the atrocities that are committed in the name of Allah. What you do see is Muslims marching in the street, screaming about how America has to submit to their beliefs.

These people haven’t come to America as normal immigrants, seeing to assimilate into society and get a better life; they’ve come as a conquering army, who want nothing less than subjugation of the United States to their religion. As has happened throughout history, Islam is going forth by conquest, using the sword to gain followers.

With that in mind, it’s not surprising that Abdulazeez killed four Marines and wounded a policeman and a Navy sailor. He came to the United States to wage war. Perhaps he wasn’t thinking of actually pulling the trigger himself in the beginning; but at some point, he decided that the jihad required that of him. He probably believed that in doing so, he would win his place in paradise.

What Is the White House Doing About It?

We can expect these sorts of actions to continue or even increase. Obama is importing Muslims from Syria, supposedly as refugees, because there aren’t enough here in the States to satisfy him. You can be sure that some percentage of them will be radicals, who will make their presence known in a rather loud way.

Just like the terrorists who are crossing our southern border, they will bide their time and take action when they see it being to their benefit.

You know, many on the left have badmouthed President Bush’s “War on Terror.” But there’s one thing that can definitely be said for it. After 9-11, when he declared war on the terrorists, we didn’t have many terrorist attacks happening in the United States.

Now that Obama has given up the war, essentially giving the victory to our enemies, we are seeing many more.

This video was first seen on On Point with Tomi Lahren

Some countries have started taking action against these jihadists, deporting them and sending them back to where they came from. This is probably the only effective way to stop their actions.

As we can see in France, England and to some extent in the Detroit area, one of the tactics that today’s Muslims is using is to take over neighborhoods and towns, driving out non-Muslims. When they do, they essentially ignore civil law and implement Sharia Law in the areas that they control. There are areas of France which are known as “no go zones” because they are controlled by Muslims.

Is that going to happen here in the United States? It will if we don’t stop it.

While I firmly support all the rights mentioned in the Constitution and the Bill of Rights, I don’t support the right of anyone to force their will on another. That includes forcing their religion on others. Islam goes against that and people like Abdulazeez who kill in the name of Allah, do so as an act of war, with the intent of subjugating all of us to Islam. This isn’t just a simple murder, it is an act of war. Until we start treating it as such, and treating the perpetrators of these crimes as war criminals, we won’t see an end.