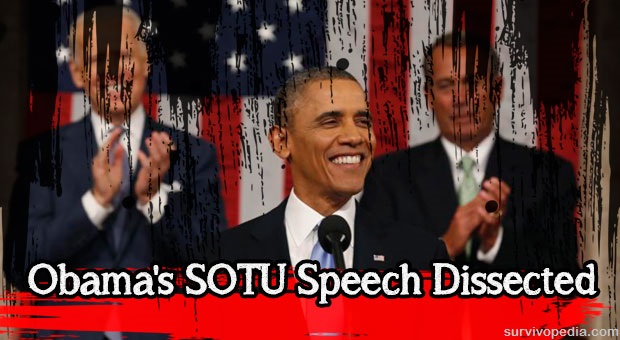 Last Tuesday, President Obama gave his 2015 State of the Union Address. I find it ironic that a man who has worked so hard to bring about division in this country should have the honor of addressing its citizens on the state of the Union.

He’s created more racial division in this country than has existed since before Martin Luther King, Junior’s time; turning blacks and hispanics against whites. As if his race baiting actions weren’t enough, he’s also inflamed class warfare in this, which is supposed to be a classless country.

He’s polarized the political parties more than ever before, set the homosexual community to attack Christians and done everything he can to support Radical Islam.

Unity Is Just a Word

Obviously, unity had nothing to do with the speech that Obama gave or anything to do with his agenda. That is, unless unity means submitting to his will. Ever since he came into office, his style of dealing with Congress has been dictatorial.

He demands and expects Congress to submit to his demands. Unfortunately for him, there are a few Republicans in Congress who aren’t in agreement with his vision for destroying America.

Yet, Obama has thrown the gauntlet down at his Republican opponents. Already, he’s threatened to use his pen to veto six separate pieces of legislation that go against his vision for America. That’s going beyond what the veto power of the president is supposed to be for, but since when does that matter to the current occupant of the White House?

A joint FBI & DOJ report about the Ferguson shooting not only proves conclusively that Michael Brown’s civil rights weren’t violated in any way during the shooting that led to his death, but also proves that Obama and his henchmen, Eric Holder and Al Sharpton intentionally used the situation to increase racial tensions in America, as well as tensions between the police and Black Americans.

Obama said that the state of the Union is strong; a statement that has probably been included in every State of the Union Address that has been given since the beginning. But what part is he saying is strong? He’s been dismantling our military. He’s overregulated businesses to the point where they are failing.

He’s raised corporate taxes to the point where corporations are moving their headquarters overseas, just to survive. His only action to help unemployment has been to increase the number of government employees. Where is the strength? If it’s not in our military or our economy, what strength is he bragging about?

Thanks to Obama, America is no longer the world leader she has been since World War II. Now, Europe is looking to Putin for leadership, the head of the very country which we as a nation swore to defend them from. Obama’s actions against Putin’s aggression have been so weak as to be a joke. Putin has seen them for what they are, the empty threats of a weak, ineffective man.

It is clear that Obama doesn’t have an idea of how to lead on a global scale. His foreign policy has been a disaster since day one, and it isn’t getting any better. He refuses to acknowledge the danger of Radical Islam, which he didn’t mention once in his address. According to him, the farce of global warming is a bigger threat. Maybe that’s because in his heart, he’s actually a Muslim.

In a way, Obama’s State of the Union was like his other speeches. He’s never stopped campaigning and this was one more campaign speech. Instead of addressing the country’s problems, he made more promises to those who follow in his wake, with their hands stretched out to receive more government handouts. Between free college and free leave from work, he’s once again offering them other people’s money, so that they’ll vote for him.

How does Obama plan to pay for his new freebies? By creating new taxes. He’s only proposed 442 new tax hikes since he became president, what’s a few more? But you know how he says it; it’s always to charge the top one percent of earners their “fair share” of taxes. I don’t know what the liberal progressive definition of fair is, but the top one percent of earners in the country are already paying more taxes than the bottom 90 percent put together.

The other thing is that they never go after just those top one percent; they go after the middle class. So, while they do increase the taxes on the rich, who can afford it, the ones who always suffer when taxes are raised are the middle class. Our middle class is literally being squeezed out of existence.

So I ask… what’s the State of the Union? Sadly, it’s not good. The big question is whether it can survive two more years of an out of control president who seems hell-bent on destroying it? There’s a lot of hope that Congress will put a stop to him, but Congress is limited in what they can do; especially when the chief executive ignores the legal limits on his power and does what he wants to do.