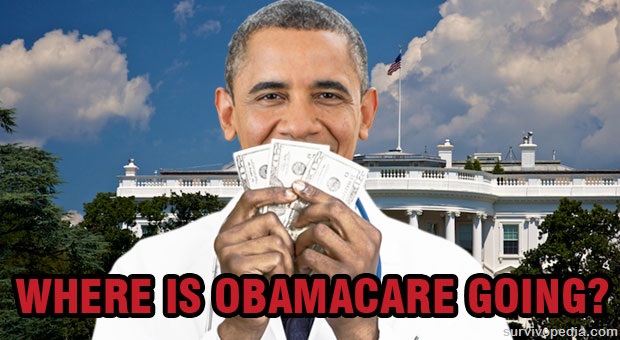 Where Is Obamacare Going?

Stories don’t stay on the front page for long, especially when it seems like there is a new scandal in Obama’s presidency every week. It makes me wonder at times whether he’s really that incompetent or whether he’s intentionally manufacturing scandal after scandal, just to keep people from being able to pay too much attention to any one thing he is doing.

Regardless of how Obama and the mainstream media are directing our attention at any one moment in time, we need to try and keep an eye on everything that is going on around us. Our failure to do so could result in something major happening, to our detriment, without us having any real warning.

As we slip into the New Year, I can’t help but think of Obamacare. Tax season is right around the corner and this is the first year where those of us who can’t afford buying insurance under Obamacare have to pay a penalty for our inability to pay. This is definitely a Catch-22 situation and I’m afraid it doesn’t look like it’s going to get any better.

{adinserter emp}Unless Congress is able to pass at least a partial repeal of Obamacare, we’re going to be stuck with it. That means that next year’s taxes are going to carry a heavier penalty for not having insurance and the year after that having even heavier penalties. Even so, the penalties are still cheaper than the insurance.

Ever since the Unaffordable Care Act passed in 2009, there have been many of us hoping and waiting for some sort of repeal. The House of Representatives has tried 54 times to turn the tables on Obama’s healthcare bill, but have been blocked each and every time by the Senate.

However, having a Republican controlled Senate doesn’t look like it’s going to solve that problem. The Republicans still don’t have enough votes to overcome a presidential veto and Obama has promised to veto any attempt to stop his signature legislation. For once, I think we can believe him.

However, even though there’s about zero chance that the Republicans in Congress can get rid of Obamacare, there is a slight chance that they can chip away at it, getting rid of some of the problems that it creates. I don’t know if they’ll succeed in getting rid of the individual mandate, but hopefully they’ll be able to slip a few things through.

Actually, at this point, totally repealing Obamacare is a practical impossibility. Over seven million low-income people have joined Medicaid under the provisions of Obamacare. Most of those probably are amongst the working poor, who can’t afford healthcare insurance on their own and don’t receive it from their employers. It would be unfair to them to kick them out of Medicaid; so something would have to be done for them.

Even so, it’s clear that something has to be done about Obamacare, whether Obama allows Congress to or not. Health insurance rates are rising even more this year, as insurance companies adjust to their new patient demographics. But that’s actually the worst part of Obamacare.

For some reason, everyone focuses on the premiums, and ignores the high deductibles. Those deductibles mean that the average American family has to pay $1,000 per month ($12,000 per year) in medical expenses, before their health insurance does a thing for them. Who can afford that?

It seems like every time we turn around, there’s a new problem with Obamacare. While the media isn’t reporting it, Medicaid payments to doctors are dropping this year, even in the midst of Obamacare making greater demands on the doctors who service those patients. It’s clear that the main goal here is redistribution of wealth, taking from the doctors and giving to the poor who are their patients, rather than getting the patients good healthcare.

Politicians don’t normally think of it, especially liberal politicians, but we have to figure reality in here somewhere. Even if we don’t, it will figure itself in. There’s no way that anyone can expect doctors to give top-notch healthcare to patients, when they are losing money to do so. They’re going to have to cut corners, just so that they can cover their expenses. So, all those Medicaid patients are going to end up being the ones suffering.

Of course, the other thing that the doctors can do, and many already have, is totally opt out of the system, not accepting Medicaid patients or even Obamacare patients. There is no law on the books (yet) which requires them to accept those patients if they choose not to.

On top of the other penalties being levied against doctors, Obamacare forces them to use a very cumbersome computerized patient record system. Due to the wording of the law, the doctors have to do this themselves, essentially being clerks on the government’s system, which is extremely difficult to use.

Doctors are reporting that just doing this clerical work is costing them 10 percent of their time, essentially reducing doctor availability by ten percent. That’s like someone fired 10 percent of the doctors in the country.

I expect we’re going to see some real fireworks in Washington over Obamacare in the next year. But to be honest, I don’t expect to see much in the way of results. Obama has decided that his new role is the obstructer in chief, and he is determined that nothing the Republicans want to do will get past his veto pen.