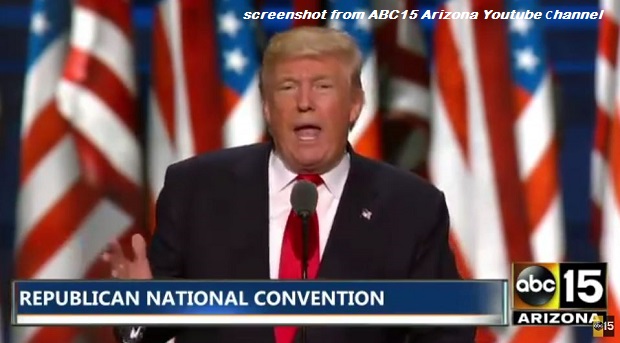 Now We Know: So It’s Trump

Well, the Republican convention has come and gone and the presumptive nominee is no longer presumptive; he’s got the nomination. So, whether you like Trump or not, it looks like he’s going to be on the ballot this November.

Now the only question is whether Hillary can stay out of jail long enough to oppose him.

Regardless of what anyone says about Trump, he’s a businessman. Considering the mess our country is in financially, perhaps a businessman is what we need. At least with him, we can be sure that he’s going to look at money as something real, that represents the sweat of hardworking Americans, not just something you turn on the printing press to get more of. Trump understands money and he understands that someone has to earn it.

There are those who have belittled Trump for his lack of position papers and not making clear the fine details of where he stands on different issues. But that’s because they’re judging him as a politician.

Yet Trump isn’t that sort of animal, regardless of what sort of fur he’s wearing now. He’s a businessman, accustomed to sit at the apex of a corporation. So as a businessman, he gives guidance to his underlings and expects them to come back with the position papers for him to agree with or disagree with.

Anyone who knows anything about management knows that a good manager only hires people they can trust to do the job. They give those people clear guidance and then get out of their way, allowing them to do the job. That’s the way Trump is used to doing things and you can be sure that he will run the government that way. He’s not going to change to make a bunch of bureaucrats happy, any more than he is to make his opponents happy.

What makes so many people (me included) leery of Trump is his way of talking about issues. Even worse than that is the way the media misquotes his way of talking, turning everything into something for the liberals to get their panties in a wad about.

But I’m sure that at least some of that is calculated on his part. Trump has done a masterful job of manipulating the media, something that politicians aren’t supposed to be able to do. Yet because of all the free publicity he’s received from them, he’s been able to run a very inexpensive campaign to this point. We’ll have to see if he can continue capitalizing on that.

While the convention itself was a typical string of speeches, most of which I very carefully managed to avoid, there are some important points out of this convention, and especially about Trump and his candidacy that I think we need to consider. After all, if the election is between him and Hillary or even him and Bernie…

Probably the most interesting thing about the convention was Trump’s family. His wife, Meliania and four of his children all spoke at the convention, relating their experience with their dad and giving the nation a view of Donald Trump that we rarely see of any political candidate. Instead of having a politician’s family, who just looks good in the pictures, Trump has a family of grown businessmen and women, who have proven their own ability to manage various parts of Trump’s businesses.

While everyone has been having a conniption fit about Meliania’s speech, accusing her of plagiarizing from Michelle Obama, they’ve largely done so in order to ignore what the kids said. The truth of the matter is that Meliania’s speech was written by a speechwriter and they plagiarize all the time.

With all the bad things that people accuse Trump of being and saying, one has to wonder how he could manage to raise such good kids. His three oldest are all Executive Vice Presidents in his corporations, and not just because their dad’s name is on the building. They’ve each worked hard for what they have, even working with their hands.

Donald Trump Junior explained his dad’s philosophy in training his kids for business. He said, “My father’s logic from the beginning was if you’re going to have someone dig a ditch for you, you’d better know how to do it yourself. So here’s your shovel. Start digging.” With training like that, it’s no wonder that Trump’s kids have risen as far and as fast as they have in the business world.

Many of us have been concerned about Trump because he has been a lifelong Democrat. Yet he is running for president as a Republican. Perhaps that’s an indication that he’s finally grown up and is no longer chasing after the liberal rainbow; but a lot of people have been concerned what kinds of values he’d bring to the White House, if he wins in November.

So there are a number of very good things going on in the Trump camp. But that doesn’t mean that everything is goodness and light. Trump’s personality grates on a lot of people, both in the political realm and in the country at large.

He seems to hold a grudge all too good for someone who is looking to win the presidency. This is seen in his actions towards Ted Cruz and John Kaish, his two closest rivals in the primaries. Trump has reportedly donated $20 million dollars to form superpacs, in order destroy the political career of those two rivals. Considering that he’s already won, and done so handily, that seems unnecessary.

We’ve seen this sort of pettiness before, during the years of Obama’s presidency. We’ve also seen Obama use the various departments of the federal government as a weapon, to wage his personal war on his enemies. Are we now getting ready to see four more years of the same?

There is much that Donald Trump still needs to learn, if he is going to be an effective president. While his business acumen should serve him well, you can’t treat foreign leaders the same way that you treat business rivals. Some of those foreign leaders have nuclear weapons pointed at us, so insulting them might not bring the kinds of results that we want.

Likewise, a president can’t just order Congress around, although Obama has always tried to. Presidents have to able to work with Congress, negotiating back and forth to get the business of our country taken care of. Perhaps it’s simply lack of experience in politics, but Trump seems like he expects to be able to order the government around, including lawmakers in Congress. But, then again, we already have a president who tries that, so in that manner it would be business as normal.

Regardless of what Trump claims he’s going to do, first he must win November’s election, and that’s not going to be easy. There are too many people who are against him; enough that #NeverTrump might be a bigger problem in the voting booth than Hillary will be.

There are those who are saying that they aren’t going to vote for Trump and in fact won’t vote for any candidate for president. While this is honorable on the surface, it doesn’t help keep Hillary out of the White House. No matter how a conservative or Republican feels about Trump, allowing Hillary back into the White House would truly be criminal.

It has been a long time since the Republican Party has offered us conservatives a true conservative candidate. Rather, I’ve spent most of my life voting against Democrat candidates, than truly voting for the candidates that I’ve been offered.

Surprisingly, looking at the platform that Trump has put forth, he might actually end up being the most conservative candidate that the Republican Party has fielded for a long time. He’s not a Ted Cruz, but he’s apparently not a RINO either.