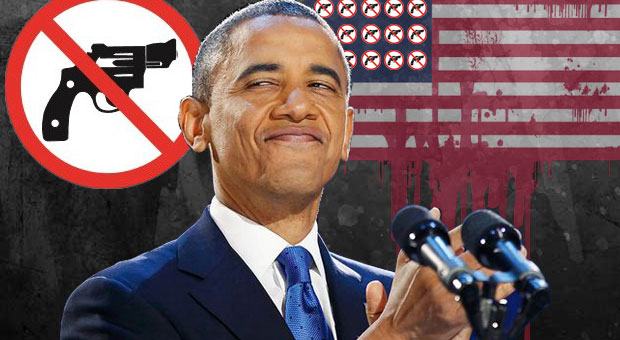 The Dictator Versus Our Civil Rights

A couple of weeks ago, I wrote that Obama was going after our rights to bear arms as outlined in the Second Amendment of the Constitution. Well, the New Year was here, and as almost his very first act of business on arriving back in Washington, Obama issued a new set of executive orders, doing just that.

Obama has stated that his goal for his last official year in office, is to do something about gun control. If that’s the case, then the actions he took on January 5th are only the opening salvo against our 2nd A rights. We must realize and constantly remember, that the left’s way of doing things is the same as eating an elephant… one bite at a time.

That explains why Obama’s new executive orders seem so benign. In fact, they look like a paper tiger. In some cases, what he’s ordering merely seems to be a repeat of what’s already in the law, while in others it seems like he’s actually doing something positive. After all, spending money on improving mental health services, in order to find and help potential mass murders, actually seems to agree with what many conservatives have been calling for.

Obama’s announcement of his illegal measures was nothing more than one more opportunity for the liar in chief to lecture the American public on his exaggerated liberal talking points. Rather than make any useful statement, he spread a series of lies and half-truths, some of which were immediately caught and refuted by the liberal media.

Considering the liberal media is as anti-gun as Obama himself is, their catching his lies about gun violence is really something. Yet that is exactly what they did. Some even challenged him, which is extremely rare for the liberal media to do.

Even so, suspicions run high about anything Obama does, and this is no exception. There is very good reason why we are all suspicious of Obama, and that is that what he says and what he does are not the same thing. If there is a way to use the executive orders he just released to hurt the rights of American citizens, then we can be sure that he will do so.

While Obama’s stated goal is to make our communities safe, we have to realize that his saying so is merely like the magician’s gloved hand, intended to distract people, while he does something else. So too with these measures. If he was truly concerned about the safety of our communities, he would stop going out of his way to make them more dangerous. Just in the last year, he’s personally made things more dangerous by:

There are more, but just this sampling shows how little Obama cares about our nation being a safe place for us to live. Were he truly concerned about public safety, he would take action to protect the American people, not to make our lives more dangerous.

Does a Great Nation Need to Follow Others’ Example?

In the midst of all these things, making our lives more dangerous, Obama talks about the need to make our country more like Australia and take honest law-abiding citizens’ guns away from them. It’s clear that public safety is not his concern, but rather his progressive liberal agenda and his stated desire to destroy the country and therefore fulfill the dreams of his father.

So, while the executive orders that Obama signed may seem benign, we have to put ourselves into the convoluted thinking of a progressive liberal mind, in order to truly understand them. I don’t claim to have that ability, but as I look at them, a few things stand out to me.

As usual, the measures that Obama is taking will do nothing to prevent criminals from getting their hands on guns, regardless of what he says. Nor will it do anything to prevent mass shootings. The perpetrators of those shootings acquire their guns legally and criminals do not buy guns at gun shows, they buy them on the streets. So, on one hand we can call everything that Obama did with this latest act of anti-gun rhetoric nothing more than a circus show, except for one thing… he truly hates guns. There has to be a more nefarious purpose.

First of all, Obama has talked about closing the “gun show loophole.” I’ve been to a number of gun shows and even purchased guns at them. This loophole that he refers to is purely a thing of liberal fantasy. Anyone who has ever tried to buy a gun at a gun show knows that you have to jump through the same hoops at gun shows, that you do when buying a gun in a gun store. Perhaps that’s because the majority of the sellers at gun shows are gun store owners.

The only way you can buy a gun at a gun show, without a background check, is to buy it privately. While most gun shows are frowning on it now, you can rent a table at a gun show as a private citizen and sell some of your personal gun collection. The law allows it, just as it allows you to sell a gun to a friend or family member.

According to Obama’s new executive orders, anyone who sells guns “regularly” is going to be required to have a federal firearms license (FFL) and perform background checks. But that’s already the law. So what’s new? When asked by a reporter what the threshold was for requiring the FFL, Obama said there is no minimum. Is he planning on making people get a FFL to sell one gun from their private collection in a private sale?

That possibility has been a concern of gun-rights activists for some time. The reason is that the only way such a law could be upheld is to institute a nationwide gun registry database. Historically, that’s the necessary step before confiscation, so there’s a real danger in allowing the creation of that database.

Obama also railed against the ability to buy guns online, without a background check. This part was probably nothing more than grandstanding, as that’s illegal. Currently, firearms purchased online require the same level of scrutiny as firearms bought in a brick and mortar store. The buyer has to fill out the applicable paperwork and the seller has to call the NICS for a background check. If the firearm is to be shipped across state lines, it must be delivered to a FFL holder (gun store) for the completion of the paperwork and NICS background check.

There were two places where Obama added money to government department budgets, in order to improve gun-related services. While that is illegal for him to do, without congressional approval, everything else he did was illegal too, so we’ll set that aside for the moment. The two areas are to increase the NICS and to hire 50,000 more mental health workers.

Improving the NICS is a worthwhile endeavor. The current system has holes in it, specifically holes that allow people with mental illness to slip through. Not all states properly inform the NICS about those who have been adjured to be able to handle firearms safely. That might help catch people like Adam Lanza, before they go on a killing spree. But, once again, I have to wonder if that’s all it’s about.

I especially wonder when I couple that with the hiring of 50,000 additional mental health workers. What is the true reason for that? The obvious answer is to help find people who are not mentally capable of handling the responsibility of owning firearms. But how are they defining that?

As it stands right now, the Veteran’s Administration has been paying doctors to certify that individual veterans aren’t emotionally stable enough to own firearms. There is no hearing about this and the vet isn’t given the opportunity to defend themselves. All it takes is a doctor’s signature on a form. This atrocity is about to be extended, doing the same to the elderly who are receiving Social Security. Except in their case, the criteria isn’t PTSD, but rather the inability to handle their own finances.

The way the executive order is written, these people are unable to own firearms because they have been deemed to be mentally incompetent or unstable. Since when does the inability to write a check make someone mentally incompetent or emotionally unstable? If there’s anyone in the country who needs a firearm, it’s the elderly. All too often, criminals prey upon them, because of their inability to defend themselves. Firearms at least give them a fighting chance.

This is some of that “one bite at a time” creep that I was talking about before. First they went after the veterans and now they’re going after the elderly; who is next? What fringe group is Obama going to pick out next, in order to marginalize them and take away their Second Amendment rights?

If we add together the actions against senior citizens, the increase in mental health workers and the increase in NICS workers, we can arrive at a troubling conclusion. Perhaps Obama’s next step is to require mental health screening of gun owners. They do that in Australia and he’s been holding their gun laws up as an example. Perhaps these 50,000 health care workers aren’t going to look for the Adam Lanzas in our midst, but iThe Distead look for a means to certify gun owners as unfit to own firearms.

The fifth edition of the American Psychiatric Association’s Diagnostic and Statistical Manual of Mental Disorders (say that five times fast) is so extensive, that it’s all but guaranteed that every person in the world has some sort of mental disorder. Psychiatrists and psychologists have been working overtime to define conditions that can be called mental disorder. Part of this is for their moment of fame and part is that they truly believe that we all have something wrong with us (except them, of course).

Is that going to happen? Once again, I don’t know. But the precedence is being built, even as we speak. We must always remember that Obama’s goal, as well as the entire progressive liberal left, is to take our guns away, so that they can have total control. They will use every means they can, and create those means if they don’t exist.

One final point; this is just January. At the end of last year, Obama clearly stated that his goal for 2015 was gun control. It is quite possible that he started early, so that he could do several rounds of executive orders, each one encroaching more and more on our rights.

If that’s the case, we have much more coming our way. Keep your eyes open.