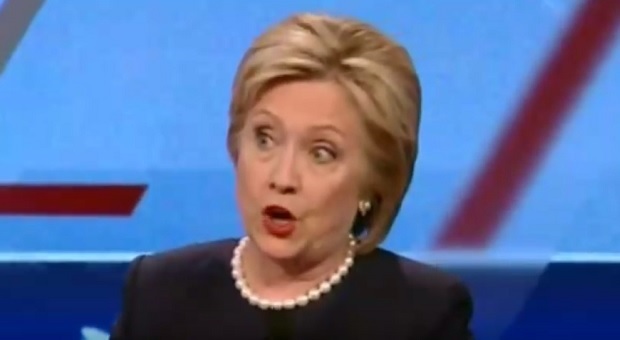 Could Clinton Actually Go To Jail?

Hillary Clinton’s run for the presidency has been plagued by a constant string of scandals. Yet somehow she still manages to stay in the primaries and even to stand out as the Democrat front-runner.

But I guess we shouldn’t be surprised; after all, her husband had so many scandals while he was in office, that he became known as the “Teflon President.” Of course, he’s not the only one to ever win that title, but he was one of them.

But now, Hillary has her own list. Some are shared with her husband, but there are many more which are hers alone, not having anything to do with his presidency. Starting with Benghazi and running through her e-mail scandal, it seems like there’s nothing that Hillary does, which doesn’t rate high on the scandal meter.

The sad thing is that her followers don’t seem to care. Now, I realize that there have been many cases of political groupies who didn’t care about the scandals of their favorite candidate.

But there’s a difference between a scandal based upon not liking a politician’s decision, one that’s based on made-up “evidence” and one that exists because the politician either broke or severely bent the law. The collection that Hilary is building seems to fall into that last category, rather than the first.

While the List Itself Is Extensive, Here Are a Just a Few Highlights:

There are many others that could be added to this list, but these are the biggies; and besides, that’s enough anyway. Any one of those should be enough to send her to jail, but up to now, nothing has happened.

Sadly, many of our nation’s top politicians seem to think that they are above the law. While I won’t say that either party has a corner on that market, the Democrats seem to be better at it than anyone else. Somehow, they have claimed the Jesuit argument of the end justifying the means for themselves, and use it as justification for any number of crimes.

That doesn’t just mean a good political result either. I guess if they did it to accomplish something good it would be one thing, but all too often, it’s about building their own wealth. Considering that Hillary was supposedly broke when she and Bill left the White House, doesn’t it seem at least a little suspicious that she’s supposedly worth $40 million today?

But, it seems like it all might finally be catching up with her. The FBI is working on concluding their months long investigation into her use of a private e-mail server while employed as the Secretary of State. That alone was illegal, but what is even worse is that she allowed her private server to be used for the transmission of highly sensitive, classified information.

This really isn’t something where she can claim ignorance and get away with a slap on the hand. As a top-tier executive in the administration, she would be made aware of the rules involving classified information and would have signed some rather frightening documents which listed the penalties to be paid if she broke those laws. So her actions were taken with her eyes open. There may have been stars in her eyes, blinding them, but they were definitely open.

One of the documents which has been uncovered all but told the terrorists how to kill Ambassador Stevens. That makes her directly involved in his murder, and carries the charge of conspiracy to commit murder.

The thing is, nobody knows who read her e-mail. Since it was on an unsecured server, there’s a very good chance that any number of enemies had access to it. Both China and Russia have invested enormous effort into building their cyber-warfare corps; developing the means to break into other countries computer systems, both for the purpose of spying on them and shutting them down.

But Clinton’s server wouldn’t even have required that level of expertise. Since it was an unsecured server, pretty much any hacker could find their way in. It wouldn’t have taken the resources of a nation-state. So, terrorist organizations and others who wish us ill will could have been given access to some of our country’s deepest secrets. U.S. citizens couldn’t know those things, but our enemies could, thanks to the Secretary of State.

What’s Really Behind all This?

The Bilderberg Group has endorsed Hillary for president, something that the liberal news media is studiously ignoring. These are the liberal movers and shakers in the world, the ones who are behind the movement for a one-world order. Could they have ordered her to make her e-mail accessible, in exchange for their support? We will probably never know.

So where are we now? The FBI has stated that they are about finished with their investigation and are going to push for an indictment of Hillary. The big question is whether or not that will mean anything.

The FBI works for the Department of Justice (DOJ), historically one of the most non-partisan branches of our government. But under Obama’s rule, first Eric Holder and now Loretta Lynch have turned it into a political bludgeon to be used against anyone who doesn’t support Obama’s plan to fundamentally change the United States of America.

Rather than trying to capture criminals, the DOJ today is much more involved in trying to imprison white police officers when they are forced to shoot black criminals, attack Christian businesses when they don’t bow down to the LGBT agenda and harass the firearms industry to run them out of business. Now, their latest crusade is apparently going to be to go after climate change deniers and imprison them for the damage they are doing to the environment.

This is the same organization who has to decide to try Hillary Clinton. In testimony before Congress, the Attorney General has already dodged questions about whether she will seek an indictment and go forward to prosecute Hillary. That makes it seem like she doesn’t plan on doing so.

Of course, this is all being orchestrated in the White House. Whether Obama is doing it himself, or his lapdog Valerie Jarrett is doing it, it’s essentially the same thing. Ultimately, it may all be pulled out of the hands of the Department of Justice by Obama himself, simply by giving her executive amnesty. Actually, it’s kind of surprising that he hasn’t already offered her that.

But here’s the kicker. Rumblings are coming out of the FBI that the director, James Comey, as well as other senior FBI officials are preparing to go public with the case. That has never happened before in FBI history. The FBI is known for being sticklers for “the book” and one of the key things that the book says is not to talk about ongoing cases and investigations.

However, should Comey decide to resign over this case and the mishandling of it at DOJ level, it would send an earthquake through Washington. More than a warning shot across the bow, that’s one aimed right at the bridge. The political fallout of such a move could have grave consequences for many more people than just Hillary Clinton.

Something has to break. Clinton is as much of a liar as Obama and everyone knows it. While her followers are willing to overlook that, few others are. Hillary could never be guaranteed the support of Congress, except if the Democrats kept walking in lockstep out of political correctness.

But that’s already starting to break. Former Democrat presidential candidate, Jim Webb has said that there is no way that he will vote for Clinton. He’s even gone so far as to say that he’s looking seriously at Donald Trump and thinking about voting for him.

While Webb is only one vote, the fact that he was a presidential candidate until just a short while ago, means that his refusal to endorse Hillary and possible vote for Trump could easily serve as a wake-up call to the entire Democrat party.