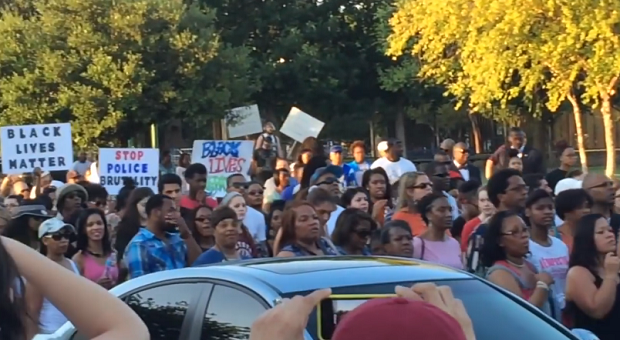 Well, it seems the police are at it again; or at least as far as the race baiters are concerned. Once more we have reports of police brutality and once more we have people up in arms. Only this time, thank God, there was nobody killed.

This latest incident took place in McKinney Texas at a party in a gated community. Apparently there were a few trouble makers at the party, getting a little rowdy. When the police arrived, the trouble makers didn’t cooperate and the police had to get a little rough with them.

As usual, someone caught it on their camera phone and it went viral. That’s all it took.

What started out as a normal police call to take care of a few teens that were going a little off the reservation, has turned into another national spectacle. The scary part is that we haven’t even gotten over Baltimore yet and the race baiters are already raising up a new battle cry, getting their minions to run to Texas and stir up trouble.

Now we’ve got the New Black Panthers showing up in Texas, as well as the Sons of Islam. Al Sharpton is supposed to be on his way, along with any other race baiters they can dig up. While Al just has a big mouth, he’s been none to call for the killing of police in the past.

The police officer who was caught on video is now on administrative leave and hiding out with his family. That’s not because he’s afraid, but rather that threats have already been made against not only him, but his family as well.

Many strong, brave man will quail when the lives of their wives and children are at risk. If they are mad at him, that’s one thing, but there’s no call to threaten his family.

The Disturbing Facts of This Situation

First of all, I can understand people getting worked up about the police killing someone, especially when the victim’s true character is hidden and they are made out to be a saint.

Granted, none of the previous victims have been saints and it appears that the police have been justified in all cases. But with the false testimony and the propaganda that the mainstream media is putting out, I can see how people have gotten upset.

But that doesn’t make what’s happening right. Being upset is one thing; rioting and destruction is another.

Nowhere, in any law, in any country, can you find a right to vandalize, commit arson and loot, just because you don’t like something that happened. That’s the action of criminals and they deserve to get locked up.

Secondly, the race baiters are painting a picture that anytime the police deal with Afro-Americans, there is racism involved. The only racism in most cases is the screaming that the race baiters themselves are doing. Criminals are criminals, regardless of their color.

There is a growing attitude amongst blacks that they don’t have to obey the police because they’re all racist. This, of course, is being fostered by the race baiters. But how does that racist argument work with black police officers though?

Thirdly, we keep seeing the same bad actors show up over and over again. I’m not talking about Al Sharpton, although he is definitely a bad actor, I’m talking about the protesters. What we have are professional protesters, going from place to place, as they are directed by their leadership.

The same people who were creating havoc in Ferguson, have also been seen in New York, Baltimore and now in McKinney. Someone is paying them to destroy, as one of the leaders of the New Black Panthers stated.

This is definitely getting out of hand. It is clear that none of this is spontaneous anymore. When the same violent protesters show up in place after place, stirring the crowd up to commit vandalism, destruction and theft, it’s a clearly planned event.

We’re Taking a Stand… But at What Cost?

The one thing different in this case is that the event is in Texas. I’m not sure, but after what happened at the art exhibit where the two Muslim gunmen were killed, I doubt that Texans are going to put up with the type of garbage that has been going on in other cities. There’s a good chance that we’re going to see law abiding citizens fighting back this time.

I remember seeing pictures when Ferguson happened of some local business owners who stood guard at their businesses, while the rioting and destruction was going on. Their businesses didn’t suffer damage. That may very well be what happens in Texas, as armed citizens take to the streets to protect their city. Considering the groups that are descending on McKinney and their history of violence, we could see the opening shots of the next civil war.

I know I’ve talked about it before, but this is looking more and more like events are being driven towards a foregone conclusion. That conclusion seems to be armed racial warfare here in the United States. If that happens, countless innocent people, both black and white, will be killed.

This is so ironic, considering that it has been the United States who has stood against such things in the past. Yet, the race baiter in chief and his ambassador to race baiting have been working overtime to bring it about. What gain can come is impossible to see. All I can see is death and destruction coming out of all this violence.

It has come to the point where I’m asking myself: “Where is the next violent protest going to happen? How many people will be injured or killed? How soon will it happen? How many businesses will be burnt out, destroyed, never to be reopened again?”

You see, there’s no longer a question of “if,” it’s become when. This has gained momentum. We have a movement for destruction right in our midst. The organizers and participants won’t be happy with anything less than more destruction.

But a desire for destruction can’t be satisfied. There won’t be a time when they will say “Enough.” Rather, it is going to continue to intensify. Someone will have to stop them or we will end up in that racial war. It may not be fought in all places and at all times, but it will be fought.

Violent clashes and destruction of property won’t stop until one side is defeated. Considering the demographics of our country, that doesn’t look good for the blacks. Someone is using them, and that someone apparently doesn’t care how many of their lives are destroyed.

So, where does this leave you and I? That’s a bit hard to tell.

We are clearly living in times of transition and danger. I doubt the transition will be very good, nor will it be very peaceful. We are likely to see that civil war break out at any time. All that’s stopping it is that it hasn’t yet developed enough momentum.

But from the looks of things, that momentum is building.