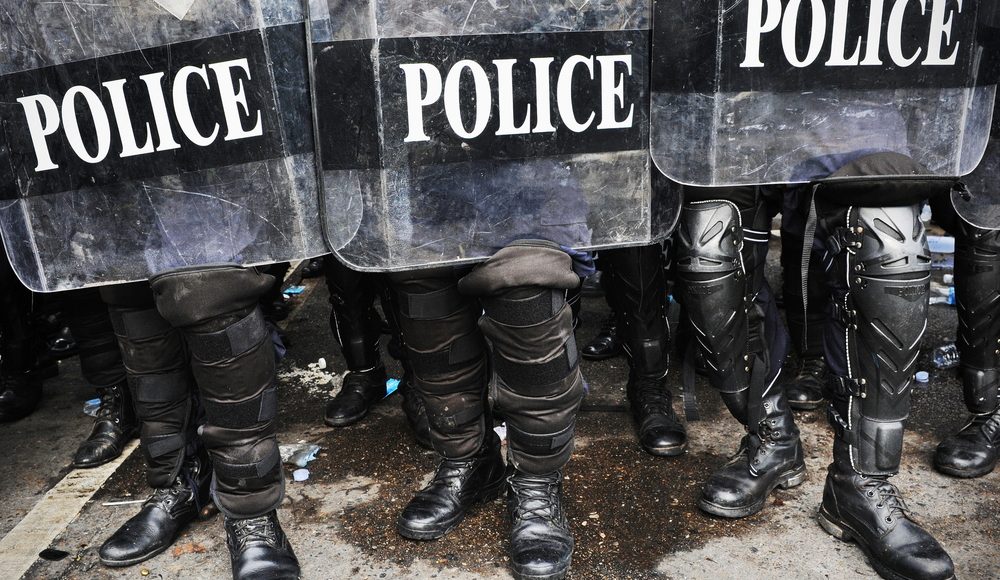 If there’s one thing that preppers dread above all else, it’s martial law.

The fear is born from the fact life can seem standard one minute and change drastically the next, as you cannot trust governments to maintain a democracy.

Social unrest in several parts of the world is becoming more frequent. Rioters are feeding off the protesters who want to make their community a better place. All these can lead to the declaration of martial law by governments without warning to the people.

Since this governance system can happen when we least expect it, it is better to put our interest first and plan ahead of time. Read on to find out what martial law is about, and stay alive while it persists.

What is Martial Law?

Martial law is a term we’ve all heard about at some point. If you’ve followed the governmental trends in Asia or some of the war-torn countries like Iraq, then you have a clue of what we are talking about.

Even the United States has imposed martial law during times of civil unrest throughout its history. At the state level, the last declaration was in 1963 by the Governor of Maryland, J. Millard Tawes, during the riots in Cambridge. So, what exactly is martial law?

Martial law is the direct imposition of military control over normal civil functions or civil law suspension by a government. It is usually in response to a temporary emergency where civil forces are overwhelmed or in occupied territory.

Governments use it to enforce their will on the people, like after the coup d’etat in Thailand in 2006 and 2014 and Egypt in 2013. They can also declare it after natural disasters, but countries prefer to change the term to a state of emergency.

How Do You Survive During Martial Law?

The 21st century has seen various changes and growth in the world. With technological advancements like artificial intelligence (AI) and online learning platforms like digiperform.com, it’s easy to think the world has gone beyond the era of martial law.

Thoughts like that are what will leave many unprepared when they wake up to find that life as they know it has changed. Please make no mistake, martial law is a terrifying situation, and to survive and make the most of it, you have to follow these instructions.

Stock Up on Food and Other Necessaries

Hoarding is nothing to be ashamed of, as it is key to saving your life and ensuring you live through the period of martial law. If you’ve ever seen an apocalyptic movie, then you know that there’s significant food scarcity during times like this.

Store shelves clear out within minutes during martial law, so you have to buy ahead of time. Go for canned products with an extended expiration date. If you need greens like veggies, buy from the farmer’s market, store them in your refrigerator, or better still, start a mini-garden.

Ensure you have food that can last at least up to a month, and if you have others with you, calculate each person’s portion and buy accordingly. You also need water, so keep as much as you can.

If the martial law started during summer and would last throughout the season, you must make water a priority. At least, keep one gallon per person to avoid dehydration. Keep your supplies in different locations in the house.

The military will conduct random house searches to fish out those with food. So, keep your supplies hidden, and use the bait method to satisfy them by leaving a few items in open areas.

You want to avoid two things during martial law, that is, being seen and heard. You don’t want the military to know you are there and become a target, so it’s better to stay out of their way.

Preppers are the most vulnerable during this time, with the suspension of fundamental human rights that would have protected them. These rights include:

Avoid talking about your prepping or what you have or don’t. Don’t dress in military-colored or styled outfits to avoid confrontation. It is best to copy the ostrich and keep your head buried in the sand.

Before martial law, it is okay to air your views on world politics, gender equality, or websites to place sporting bets like csgo betting. However, once this system of governance begins, forget your opinions, and play the mute.

No matter your view on the current political climate, it is better not to share it with anyone, including your friends and family. Remember that freedom of expression no longer exists, so listen more and talk less.

It is excellent and safe if no one finds out you are a prepper. Martial law is not the time to admit this fact about yourself to anyone. Wait until things go back to normal, and the Rule of Law becomes operational again.

Information is and will always be powerful no matter the era you are living in. Thus, it is vital to stay informed on the happenings around you and separate what’s accurate from fiction.

Keep in mind that the government controls the media during martial law, but you still have to listen. Doing the latter will help you know about the new rules, curfew times, and other relevant information to adjust your life and movement.

The rules will keep changing, and you have to adapt to the changes. Another thing you can do is tap into HAM radio frequencies to get information from those who are off the grid.

They will have the unofficial version of things, which is more likely the truth. Knowing both sides of the story will help you survive and prevent misinformation.

Trust No One, But Have a Team

In life, the people closest to you are bound to betray you for reasons best known to them, and the same is true during martial law. If you want to stay alive, don’t assume that because you played baseball together as kids, your neighbor or friend won’t sell you out.

With the depletion of food and resources, survival instincts kick in, and many will trade information with the military for a piece of bread. Others might try to become the law, thereby initiating the Without the Rule of Law (WROL) post-disaster protocol.

However, you can’t go through the entire martial law regime without having someone to watch your back. It would be best if you had a team of like-minded people, preferably fellow preppers who will look out for you.

To ensure your team members are loyal to your cause and will not turn you in for saying or doing something, or having a stockpile of food, test their loyalty. You can do this by giving them bits of false information to see what comes of it.

If the military shows up at your doorsteps to take you in, you’ll have your answer, and vice-versa. It might seem risky, but it’s a little price to pay to form trustworthy alliances. After all, desperate times call for desperate measures.

Avoid Getting Stuck in Camps

History shows us that those who end up in camps or mass shelters are the least likely to survive during martial law situations. Apart from the limited supplies these places have, several things can go wrong and quickly escalate.

Thus, it is best to avoid going to camps, especially if you have a family. The best place for you to stay is your house with the lights off, but if you can’t, make plans to switch locations at intervals.

Ensure you plan ahead of time, and move often so that you won’t alert suspicion to yourself or get caught. Figure out how long you can hide in a place and move before it becomes hostile.

Stay in Shape, Learn New Skills, and Improve on Old Ones

This is a general prepper rule, and it is advantageous in adverse situations, not only during martial law. There are survival skills you must have to make it through any condition, and you must stay fit and healthy.

You need to ask yourself what happens if the martial law lasts longer than your supplies or if you get injured and can’t access healthcare. The simple answer is you need to know how to fend for yourself.

To this end, learn to fish, hunt, cook without modern amenities, and take first aid courses. Learn to make a tent and campfire if you find yourself living outdoors after bugging out and leaving the comfort of your home.

Surviving During Martial Law Depends on You

Your survival in life and during martial law depends on you and your level of preparedness. Following the instructions in this article and acting at the right time will keep you alive. So, follow it to the letter, and keep staying safe.

Karl Murphy is a professional journalist from Des Moines, Iowa. After obtaining his Master's degree, he's launched his career and over its course, Karl was contributing to the popular publications for men. He also develops his blog topforeignbrides.com.