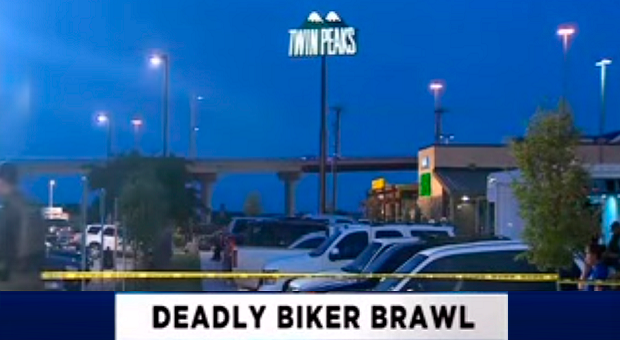 Don’t know if you’ve seen it, but on Sunday, May 17th, the mainstream news reported a major battle between rival biker gangs in the city of Wako, Texas.

This violent altercation left 9 dead and double that many wounded, with 172 bikers being arrested and held on a million dollars bond each.

This has been reported to be a clash between rival gangs, who supposedly gathered to talk over differences in territorial claims. But things quickly got out of hand and the meeting turned into a brawl, which ended with shots being fired by both the bikers and the police.

According to some reports, the shots were fired by the bikers at the police as part of a planned attack on law enforcement. There’s only one thing wrong with this report… it’s a lie.

Oh, the bikers were there and shots were fired. People were even killed and injured and the 172 non-injured bikers were arrested. The bail stands as reported. But that’s about all that’s true.

The Owls Are Not Entirely What They Seem

To start with, calling most of these groups gangs would be a true injustice. But then, since when has the mainstream news media cared about justice? It just doesn’t make as good a story to call it “motorcycle clubs” instead of “motorcycle gangs.”

That’s not to say that everyone there had lily white hands, for there were some of the groups that weren’t quite that pure. Two of the bike clubs in particular started out as bike gangs. But they claim that they’ve been working to legitimize themselves, leaving their nefarious activities behind and recruiting members who were more interested in riding, than they were in violence.

But there were totally clean groups as well. I seriously doubt you could find much to arrest the Christian Motorcycle Association chapter that was there for. What? Arrest them for trafficking in Bibles? There were also groups that raised money for charitable causes, not exactly the kind of “gang” that you expect to go shooting up a town.

There are many motorcycle clubs that do these good works. There’s even one that protects kids who are testifying against abusers. They take time off from work to surround those kids with a wall of protection, willing to lay down their lives to make sure that those kids feel safe.

In fact, all but one of the groups that was there was part of an association of motorcycle clubs. They were having their regular bi-monthly meeting. There are some bills coming up before the Texas legislature which affect motorcycle safety and they were planning on sending representatives to speak out in behalf of that legislation.

The couple who were going to represent them were slated to speak before the assembled group.

The police admit to having 18 plainclothes officers on hand, ready to deal with the “problem” of these bikers descending on their city. That’s not to count the snipers up on top of buildings or the armored cars that were on hand.

There were city police there, county officers from the sheriff’s department, state troopers and I wouldn’t be surprised if there weren’t a few carefully hidden federal agents, perhaps from the Department of Homeland Insecurity. It becomes clear that the police were ready for a battle and when the opportunity presented itself, they had one.

And it’s not the first time it happened, we wrote about something similar here.

And still interestingly enough, there isn’t a single video of the incident in the parking lot. Not one person caught it on their cell phone, nor did anyone manage to shoot a picture of the violence. In today’s society, where people are snapping pictures and catching video of everything and uploading it to YouTube, Facebook and Twitter as fast as possible, which sounds a bit strange too… almost like someone is trying to cover something up.

There wasn’t one single police officer killed in the line of duty. Not only were the police unhurt in the attack, but the townspeople were too. 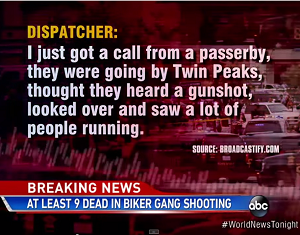 Finally, we have to look at the people themselves. These aren’t greasy, unshaven, unwashed biker outlaws; but clean cut, neatly shorn and shaved. Their clothes were neat and tidy, with some even ironed.

While they wore their club colors, most of them don’t even look like your typical biker outlaw, once you take their jackets off.

These clubs are made of middle class Americans. Many are professional people, who work typical nine to five jobs and ride their bikes to get away from the stress of their jobs.

There are also many who are veterans, men and women who have served in uniform and find they can identify with others of their kind, more than they can with others. Some people go fishing, they go cruising.

That doesn’t make them criminals, it just makes them people who like the freedom of the wind in their face and the power of a big bike between their legs.

Two million bikers descended on the nation’s capital on 9/11 in protest of the Muslim March held on the same day. They peaceably rode their bikes through the streets of Washington DC, peacefully and lawfully, even though they were denied permits and police escort.

What’s Next from the Government?

The more I hear, the more it seems like this is another orchestrated disaster intended to be used by the Democrats to gain control.

On Friday, the 22nd, it came out that federal law enforcement  plans on banning motorcycle clubs from wearing group logo patches on their jackets. Why? So that they can destroy the identity of these groups. In doings so, they are hoping to break them up and destroy them.

A source in the government told Fox News, “It’s not just stripping them of their identity, or robbing them of a recruiting tool, its’ taking the star off their helmet. The logo itself furthers a criminal enterprise.”

The Christian Motorcycle Association is a criminal enterprise? I doubt it. I know some of those guys. They’d give you the shirt off their back and deliver it to you too. They are some of the most down-to-earth, committed Christians I know. They have to be, to ride a Harley with a cross on their back.

This looks like the first salvo against the bikers. These people, even the criminals amongst them, are some of the fiercest patriots in our country. They stand for America and they stand for the Constitution; and they want to see America go back to her roots. Unlike many, they are not afraid to stand up for what they believe.

The timing of this slaughter is unfortunate, with Jade Helm 15 just around the corner. One has to ask if the two are related in any way. Could this be the secret opening move of something bigger? Could it be staged so that Jade Helm can “conveniently” come to the rescue of society when the next “battle” happens? What is going on behind the scenes that we can’t see?

I’ve tended to be skeptical of conspiracy theories. I’m even skeptical when I see videos and articles talking about things like Sandy Hook being staged by the government. Forget that there weren’t any ambulances there to take care of the dead and wounded. Forget that none of the parents filed a law suit against the schools. Forget that there was an emergency preparedness drill going on right there at that very time.

That’s just a coincidence; I’ll give them the benefit of the doubt. But I’m losing my doubts.

Rahm Emanuel, a lifelong Democrat and current Mayor of Chicago, is credited to have said, “Never let a good crisis go to waste.” How interesting that such a quote would come from the Mayor of Obama’s home town. The town in which Obama learned the seedy side of politics.

Could it be that what’s happening is the fulfillment of that quote. Could the President, in his desire to have things his way, actually be creating situations which he can manipulate to bring about his goals? Could he be so out of touch with reality that he is actually ordering the deaths of innocent citizens, just to further his political goals? I don’t know.

They may get me; but I’ll take a few off to Valhalla with me.