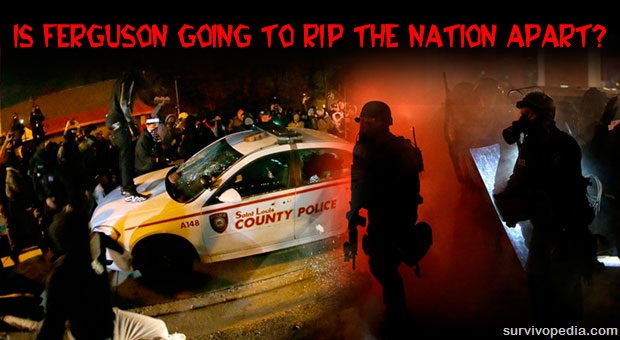 Is Ferguson Going To Rip The Nation Apart?

It happened: the Grand Jury decided not to indict Officer Darren Wilson for the killing of Michael Brown, dubbed a “gentle giant” by the media. Now, I’m no supporter of police brutality, but from what I see of the evidence, there is ample proof that Officer Wilson was well within his rights to shoot and even kill Brown.

I’m not even talking about doing so as a part of his official duties, this looks like a case of self-defense.

While the initial sensationalized reports out of Ferguson at the time of the shooting made it sound like Wilson was a racist using his position to wage a personal war against the blacks, more and more evidence has come forth to show otherwise.

Probably the most compelling piece of evidence was the autopsy report, which backs up Wilson’s testimony that Brown tried to take his gun.

But the story is really no longer about Officer Wilson and Michael Brown. What started out as a tragic shooting of one of America’s youth has turned into a racial circus, complete with the ringmaster,

Al Sharpton. As far as the race baiters in our country are concerned Wilson is guilty just because he is a white man who shot an Afro-American.

The Real Deal Behind the Story

These race baiters don’t care about the circumstances or whether the shooting was justified. Just as in the Trayvon Martin case, they have already tried the shooter in the court of their own opinion and found him guilty. Facts don’t bear on the case; all that matters is skin color.

The reaction in Ferguson, Missouri to this shooting has been rather extreme. Protesters have turned into a rioting mob on more than one occasion. Businesses have been looted and destroyed. Threats have flown around like they were confetti on New Year’s Eve. A lot of anger has been expressed, some of it in a healthy way, but much of it in illegal, destructive ways.

It appears rather clear that out of state organizers have gone to Ferguson and to St. Louis in general, to orchestrate the actions. While locals may feel a need to protest peacefully to the killing of Brown, these outsiders are after much more. It appears that they are trying to fan the flames of anger, turning this into a full-blown racial war.

A map and list has somehow managed to get out from the organizers, showing targets that are to be attacked during the next wave of demonstrations. These include businesses like Boeing, Anheuser Busch and the Ritz Carlton Hotel, as well as landmarks like the Ferguson City Hall and the County Courthouse.

Some targets, such as the Monsanto Headquarters, indicate the possibility of other political motivations besides just anger over a racially charged shooting. On top of that we must note that they have specifically stated that they are not ruling out violence or looting.

It doesn’t stop there though; Al Sharpton has organized demonstrations in 25 cities with large Afro-American populations. And he’s not the only race baiter doing so. In all, there are 83 cities where “demonstrations” are scheduled. While there are a few where local organizers are asking for a peaceful protest, it appears that in most cases, protest is merely a euphemism for “riot.”

In Ferguson, one police officer posted a note to social media stating that there was no way that the police could protect people and that they should be ready to defend themselves. This has led to a surge in firearm sales, with one store reporting six times their normal level of sales.

The question before us all now, is where is this going? There are several possible scenarios and unfortunately the only good scenario looks like the least likely. Should there be nothing more than a peaceful demonstration, it would be wonderful. But I would say that the chances of that are somewhere between slim and none; especially in all 83 cities.

The most likely possibility is violence. The FBI has already arrested two New Black Panthers members who were involved in making bombs for use in Ferguson. That makes it pretty clear that at least some want the protests to turn violent. How many are working to push things that way is anybody’s guess.

The Ku Klux Klan has weighed in as well, saying that they won’t put up with violent protests. So it appears that there is at least one white group that plans on fighting back. Many others may end up trapped in the fighting, simply out of self-defense.

I would not be quick to blame anyone who shot to defend themselves or their families. But if things get out of control, how will those cases ever be sorted out? Each one will have the potential to escalate the matter even more.

Sadly, this could turn into a racial war, spreading throughout the country and into other cities. Like the feuds of old, killings and counter-killings in retaliation could continue for years, breaking out from time to time in full-blown battles. If inter-racial violence starts in this country, there will be no winners, only losers… and everyone will be a loser.

Should things get to that point, it will give President Obama a clear, justifiable reason to declare martial law and suspend the Constitution. He has that power. The laws and executive orders have already been created.

He has armed just about every branch of government, so that he has an army of willing, obedient federal slaves to obey his every command. He could use this as an opportunity to take full control of the country, the government and every citizen’s life.

The recent elections would become meaningless, as our newly elected representatives may never step into office. Our freedom would be stripped from us, especially our guns and our freedom of speech. America would truly become a police state.

Sadly, the answer doesn’t lie with you and I; it lies in the hands of others. It lies in the hands of people who don’t care about the consequences of their actions, because they are sure than anything would be better than the status quo. It doesn’t matter that they’re wrong. They control our national destiny.