Survival, especially in a long-term survival situation, is an extreme challenge.

What our ancestors thought of as their normal day-to-day life during our country’s pioneering days would push even the hardiest of us to the extreme. The myriad tasks necessary for survival, without our modern conveniences and infrastructure, make survival an all-consuming task.

We think of ourselves as knowledgeable today, with the vast amount of information we have at our fingertips. Yet there is much that they took in stride, which we would have no idea how to handle. Whereas pioneering families grew almost all of what they ate, few of us today even have a vegetable garden, let alone one that’s big enough to truly make a difference in our family’s overall calorie intake.

This isn’t to say that we can’t do it; just that we’re not accustomed to doing it. Mankind has an amazing ability to adapt to varying situations, even the most difficult ones we can encounter. Even so, we adapt better when we do so together, with each using their strengths to help the other.

That’s what a survival team is all about. It’s a group of like-minded people who have chosen to band together with the common goal of preparing and training to survive together. When and if a serious survival situation should occur, they will come together at a pre-determined location to work together and help each other survive.

Why Join a Survival Team?

The clear advantage of creating or joining a survival team is that you will have more people working together, towards the common goal of survival. This means that each person will only have to learn some skills, becoming highly proficient in them, rather than trying to learn all the skills necessary to survive.

There is also a potential for cost savings by being part of a survival team. If you have one person in the team who is responsible for a particular area, they will invest in whatever is necessary for that area, saving the rest of the team from the necessity of investing in that area.

But the bigger advantage of being part of a survival team comes when a disaster strikes and you have to activate the team. Working together increases your productivity, allowing the team a much greater chance of survival. Should it become necessary to defend your survival retreat from attack, a larger team, working together, has a much better chance of repelling the attackers and surviving.

This is not to say that being part of a survival team is a bed of roses. I’ve seen too many people who have joined a team, brining one skill with them that they expect to do full time, while expecting the team to carry the load of taking care of the rest of their needs.

There are few survival skills that will need to be utilized full-time, in order to meet your team’s needs. The team medic hopefully won’t have to take care of injuries full-time. The team’s communicator won’t need to be monitoring their radio 24 hours a day. Whoever is the leader won’t be able to just sit in the “Headquarters” making sure that everyone else does the work.

For any team to work requires equal commitment and equal work. But some skills require less work than others. Therefore, the people who are fulfilling those functions must be willing to do other work, in order to fulfill their commitment to the team.

The same can be said for the financial side of the team. Members of the team won’t have the same income levels, nor will their specialties require the same amount of investment. So, how do you handle that? Does everyone give equally to the team pot, with the idea of paying for everything out of that pot, or does everyone pay for their own area of specialty? Do those who have more pay more, or does everyone pay equally? These are important decisions that have to be made, before the team is established.

Keep in mind that preparing for several families who are part of a survival team is much more expensive than preparing for your family alone. Many of the medical supplies you might stockpile for your family would need to be multiplied by the number of families in your team. The same can be said for most other areas. If you were using aquaponics for gardening, for example, you’d need enough equipment to set up a garden which could feed all the families.

Your Family, Your First Survival Team

Your first survival team is your family, whether that means a married couple or a couple with kids. Either way, you live as a family and you survive as a family. This has been the way things have worked throughout history and if you think about it, it’s the way that things are done even in our modern society, with each family member contributing towards the good of the family.

Turning your nuclear family into a survival team merely means that each member of the family learn skills that will help your family survive. Depending on the size of your family and their ability to learn new skills, it is possible for an average family to learn everything necessary for survival.

During the years of our country’s westward expansion there were many families living in remote homesteads, which managed to survive alone, without the benefit of a nearby town or the skills that might be found in that town. While they certainly lacked some important skills, and that caused them problems, they still worked and survived together as a family. 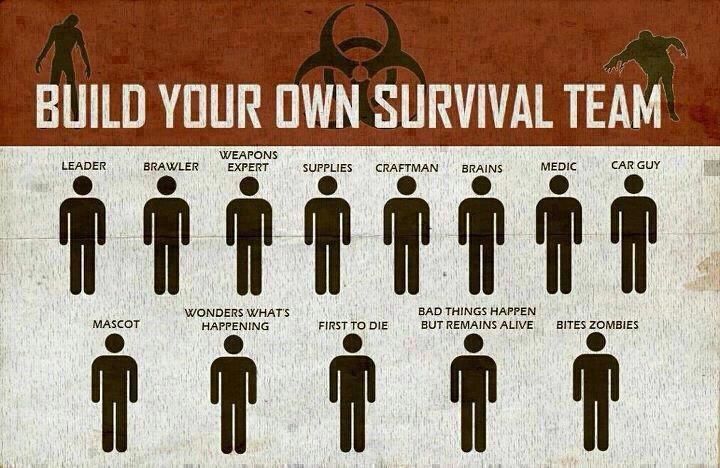 The next level of the team might be your extended family. My children are all grown and married, so my nuclear family is just my wife and I, with our dogs. We are prepared to survive together, when we are faced with a disaster. But we are also prepared for our children and grandchildren to join us, should they need to abandon their homes.

This makes our extended family part of our survival team as well. In our case, my wife and I are carrying the bulk of the financial burden of preparing, as our children are recently married and starting to raise their families, with all the associated expenses. We are better able to invest in preparing than they are, so we are doing it. They do what they can.

Each of our children and their spouses have skills which can contribute to the survival of the whole family. Even though I am the survival expert in the family, as well as the one with the most survival skills, I have already taken inventory of their skills and abilities, from the viewpoint of seeing how they apply to a survival situation.

For most of us, our nuclear family really isn’t big enough to make for a full survival team. It is difficult for one family to have all the necessary skills, especially when it come to some things that require a lot of time to learn, such as medicine. Most families don’t have enough members who can act as shooters either, so it is difficult to defend yourself.

That means going outside the family to seek out people who you can form a team together with. At this point, most people focus on looking for specific skills, when in reality you need to focus on looking for specific kinds of people. You need people who you can work and live together with on a long-term basis, without ending up at each other’s throats.

For this reason, it’s best to start out with people who are already part of your circle of friends. You’ve probably already talked to these people, at least some, about prepping and survival. So you’ve got a good foundation to work with.

Invariably, you’ll find that you need skills that don’t exist in your circle of friends. That leaves you with two options; someone in the team learns those skills or you go looking outside of that circle to find people who have the necessary skills.

Should you pick the second option, start by building a friendship with the people, before trying to bring them into the team. You need to know if you can get along with them, not just if they have the skills you need. If you can’t become friends, then it would be poor OPSEC to let them know what you are doing to prepare for a disaster. They might use it against you.

Skills You Need in Your Team

With that in mind, what kinds of skills do you need to have in your team?

Remember, these can either be skills that the person already has, or skills they choose to learn. Either way works, just as long as you have the skills you need, before you need to use them.

Additional Skills Which Would be Useful

I’ve separated these skills out because they are not as necessary. Even so, having them could make life easier for your team. Some will become more important as time goes on and your team becomes involved in attempting to reestablish society.

One important thing that everyone needs to understand is that they won’t just be working in their specialty, especially if their specialty doesn’t require full-time attention. Some activities, like gardening, won’t be able to be fully completed by one person; they will require a team effort. So, everyone can expect to get their hands dirty in the garden and take their turn standing guard while others work.

Some Basic Rules for Any Survival Team

Any team needs rules. That’s what government does for us; providing rules and making sure they are obeyed. Within your team, this will be the responsibility of the leadership of your team. Even so, everyone needs to be part of creating the rules at the outset and agree to follow those rules.