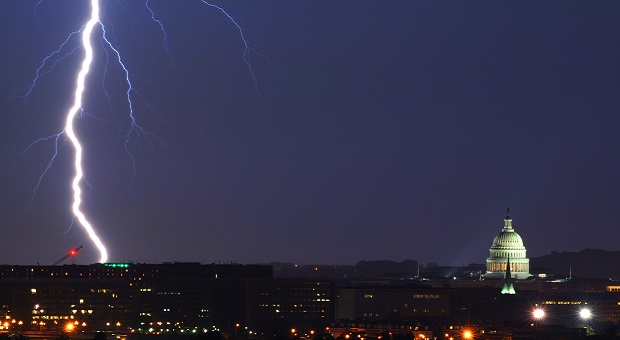 Is It Too Late For America?

Seven-odd years ago, a young black politician from Chicago stood up before a crowd of people and promised to bring “fundamental change” to America. Nobody was sure what he meant by that, but it sounded good to a lot of people.

Many climbed on his bandwagon of “hope and change” and rode it to take him to the White House, even though they knew almost nothing about the candidate they were voting for.

Four years later, the only real change that had happened was the total takeover of the medical industry and medical insurance industry, through a massively complex law called Obamacare. But that politician managed to get re-elected, telling the people that the job wasn’t done yet.

During that second campaign, he made a telling statement to another global leader, telling him, “After my election I have more flexibility.” Little did we understand the importance of those seven words. While they seemed to be focused on international relations, looking from the clarity of hindsight, it seems that they dealt more with his domestic agenda, than anything else.

Since those elections in 2012, we’ve seen a ramped-up attack on American culture. Vladimir Putin has publicly stated that he thinks Obama and the Democrat Party are trying to destroy the country’s economy. But that’s not the only attack that Obama has made against America. Here are a few more:

I could go on and on, but I’d better stop there, before I get any madder.

This one man, who may very well not even be an American, has brought about a lot of change. Granted, he had a lot of help, but the Democrat Party, government functionaries and the liberal mainstream media have followed him blindly. Even the Republican controlled Congress has followed him, allowing him to get away with murder.

So, where is this all taking us?

First of all, I’ll have to say that he’s accomplished what he promised, a fundamental change of America. The country we live in now looks nothing like the country we lived in ten years ago. Oh, the streets and buildings are the same, but the culture has enormous differences.

We didn’t have Muslims setting up no-go zones in the United States ten years ago, nor did we have a government which was punishing Christian-owned businesses for not supporting gay weddings. But we do now.

When Obama lost control of Congress, he said “I’ve got a pen and a phone.” Well, it’s clear that he’s made good use of them. In fact, he’s accomplished more with his pen and phone, than he ever did with his Democrat controlled Congress. Unfortunately, what he’s accomplished may have done irreparable damage to the country.

Trump is campaigning for president, borrowing Ronald Regan’s motto of “Make America Great Again;” but can he? Ted Cruz has promised to repeal Obamacare, starting by repealing every executive order Obama’s written about Obamacare; but can he? Other Republican candidates are rallying against one area of Obama’s changes or another; but can any of them truly turn around what Obama has done to this country?

I’m not slighting these politicians or their intentions in the least. But there’s more to bringing about change than passing laws. Many of Obama’s initiatives have taken root on a grass roots level, making them all but impossible to remove. I’ll guarantee you that getting him out of office won’t get rid of the Black Lives Matter movement and all the hatred going with it, which he helped create.

Nor will getting a Republican president in office do much to eliminate Obamacare. That’s gone on long enough now, that dismantling it will be a major problem. Just stopping it will mean that thousands or perhaps millions of people who are now receiving Medicaid will lose their coverage.

Not only that, but everyone who has an insurance policy under Obamacare will lose it too. We won’t be back to where we were pre-Obamacare, we’ll be much worse off.

Historically, liberalism has pushed the envelope of what is acceptable in society, forever trying to get new things accepted; whether good or bad. Conservatives push back, but it’s a losing battle.

What was considered liberal 20 years ago is considered conservative today. That’s because the liberals keep gaining ground and the conservatives can’t take it back. Even when they try, they only manage to take a portion of it back.

In the last few years, we’ve seen such massive gains by the progressive liberals that I seriously doubt there is any way of gaining the ground back, short of killing off all the liberals. While the liberals accuse all us conservative gun owners of being murderers, we know that’s not true. So, it’s doubtful that the liberals will be killed off anytime soon.

Any Republican president, whether RINO or true conservative, is going to be fighting against the entrenched liberal bureaucracy and the entrenched liberal media. They will be villainized at every turn, intentionally misunderstood and presented to the public in the worst possible light. Overcoming this will be nearly impossible.

Even if the next president were to succeed in overcoming the entrenched bureaucracy and media, the liberals have gained so much ground in the last few years, that the best we can hope for is retaking a small amount of the ground that’s been lost.

There are other forces at work as well, forces that believe in a one-world socialist government. You can be sure that they will do everything in their considerable power to stop or slow any actions to turn America back towards a conservative direction. These people control massive amounts of money and will use it to further their agenda; the agenda of a one world government, ruled by them, the elite.

So, the answer is obviously not in Washington. Then where is the answer? Where is there hope?

The only way that this country can change, returning back to its roots, is through a grass-roots movement. The “silent majority” is going to have to find its voice once again and start speaking out. We’ve allowed the liberals to have the bully pulpit way too long.

It’s time for new conservative grass-roots movements to raise up and take a stand. We must remember the words of Benjamin Franklin, when he said, “We must all hang together or we will surely hang separately.” I’d like to change that a bit, because I have no intention of hanging. My version goes, “We must all stand together, and else we will surely hang separately.” It’s time to take a stand.

We must make our voice be heard. If the mainstream media won’t listen, then we must use the internet. We must buy billboards and hang signs. We must shout from the rooftops and speak to our neighbors.

We must show the truth of the progressive liberal lies and we must educate others on our country’s founding principles. Otherwise, there may not be a country for our children and grandchildren.

We must teach our children and our youth the value of work; that the world doesn’t owe them and that “getting ahead” isn’t evil. They need to understand that they can do anything in life, but it’s going to take hard work, sweat, sacrifice and toil. Nobody is going to just hand it to them on a silver platter.

It’s time to reestablish a good work ethic. Our younger generation doesn’t understand why it’s wrong to chat on their cell phones all day long, expecting to get paid for it. They need to learn how to work; how to better themselves and how to get ahead by the sweat of their brow.

It’s time, before it becomes too late. If you and I don’t teach them, giving them something to live for that’s greater than their next welfare check, this card game is going to fold.