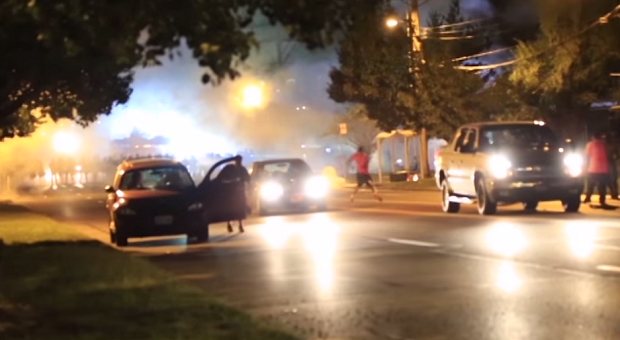 Over the last ten days or so, we’ve seen something new happening; the police have been specifically targeted for execution style killings, without provocation. These attacks have been the latest atrocity in the #BlackLivesMatter movement, clearly in direct response to rhetoric spouted by the leaders of that movement.

I need to clarify something here. #BlackLivesMatter isn’t a legitimate protest movement. While the frustration and anger that the participants may feel is quite real, it is being misdirected and manipulated to create a crisis; quite possibly to create a racial civil war.

Anyone who has followed #BlackLivesMatter can easily see that the whole movement has been about inflammatory rhetoric. A black criminal gets shot by a white police officer and the media goes nuts, talking about how another innocent black youth has been brutally murdered by racist cops.

The race baiters join in as well, putting their twenty-two-cents worth in, before anyone has any idea of the facts. The only fact that they care about is that a white man killed a black man. That’s what they are looking for, so that they can make whitey look like a racist murderer.

{adinserter bph}Yet, these black young men have later been proven to be criminals who forced the police officers’ hand. They weren’t murdered; they were shot in the line of duty, often, as an act of self-defense. At the same time, the thousands of black on black murders are ignored, as if the only black lives that matter are those which are taken by a white cop.

This “movement” has been escalating for a while, getting more divisive and more violent as time goes on. Recently, the anniversary of the shooting of Michael Brown in Ferguson gave the organizers new momentum. It was celebrated with fresh riots and shootings, escalating an already tense situation.

Many associated with the #BlackLivesMatter movement have called for the killing of white police officers and it looks like they are getting what they asked for. A number of police officers have been killed, including one who was shot in the back while filling his patrol car’s gas tank.

These acts of violence could be the first shots in the racial civil war that black race baiters have been calling for. Their rhetoric has escelated with their success and I’m not just talking about obscure shadowy figures behind the movement either; some public figures, like Oprah, have lent their voice to the same message.

Where is this all leading us? Apparently there are those who truly believe that white Americans still have to pay for the slavery that was inflicted on the blacks over a century ago.

This is a bunch of angry people who are upset at the hand that life has dealt them. Rather than do something about it, they’ve chosen to blame someone else. That absolves them of responsibility for their own lives and decisions. It’s all someone else’s fault.

Justifying actions, based on anger, is counterproductive. But even worse than that, it’s dangerous. Because once a person or group of people start down that road, there’s no stopping them. They get a thrill out of the violence itself, and look for opportunities to commit more. Those violent acts have to become even more violent, for them to get the same rush. Like any other addiction, it feeds upon itself, growing and becoming worse.

That’s where we’re at right now. The first shots have been fired. The police officers who have been killed aren’t an anomaly, they’re the beginning of a trend. I’m afraid that this is going to continue and to grow, until it becomes a true racial war.

The people behind this should be thrilled; they’re getting what they want. For what has really been a very small investment, they’ve started creating major social unrest. Unless something happens to stop it, it’s going to grow and spread across the country, dragging more and more people into its ugly morass.

I have to think that there’s a purpose behind all this. These race baiters and their financial backers haven’t invested in this mess just to see people die. They want something more out of it. It can’t just be the racial war, either. There aren’t enough blacks in this country to win such a war. There are just too many white, conservative gun owners around, for them to win. Not that the white conservatives will hunt them down, they can win the war just by defending themselves.

The only purpose I can find behind all this is the civil unrest that it is causing and the increased civil unrest that it will cause. That would give Obama the excuse that he needs to declare martial law and suspend the Constitution. With the DHS and the military behind him, he would truly become America’s first dictator.

Remember now, Obama has been purging our military, getting rid of over 200 generals and admirals. His litmus test is whether they would fire on American citizens, if ordered to do so. At the same time, he’s been pushing for Muslims and illegal aliens to be part of the military. All this makes it look like he’s trying to build a military which is loyal to him, personally; rather than being loyal to the United States of America.

This is just speculation on my part, but it’s speculation based on the facts that we know. Historically, when there is a large, well-armed military, which is loyal to the head of state, rather than to the state, it doesn’t bode well for the citizens. At some point in time, that military is turned against the citizens to conquer them. Then, their only choice, is to fight for their freedom or to bow their knees.

Is that where we’re heading? All I can say is that it looks like it. Faith in the federal government is the lowest it’s been in decades. Yet, nothing is being said or done to restore that faith. The government isn’t even trying to deny that they are headed down this road.

Oh, they’ve called a few people crazy and said that they’re fear mongers or conspiracy theorists; but they haven’t offered any evidence contrary to those theories. They’ve been doing things that seem sinister, and doing them with just enough secrecy to make sure that we see it as sinister.

Even if something happens to stop that war, we’re not going to be all right. It’s going to take decades to repair the damage that’s been done to racial relations in this country. Blacks and whites won’t trust one another for a generation or more. Those who have suffered through the riots will probably die, still looking over their shoulders. If nothing else, Obama and the race baiters have won in that small way.

And who’s going to suffer from all this? More than anyone, it’s the black community that will suffer; the very people who those race baiters say they’re trying to help. Opportunities will be lost; jobs will go unfilled and some who were lifting themselves up out of the gutter will never be able to do so. Is that what they want? To increase human suffering? If so, that’s a new kind of evil let loose in the world.