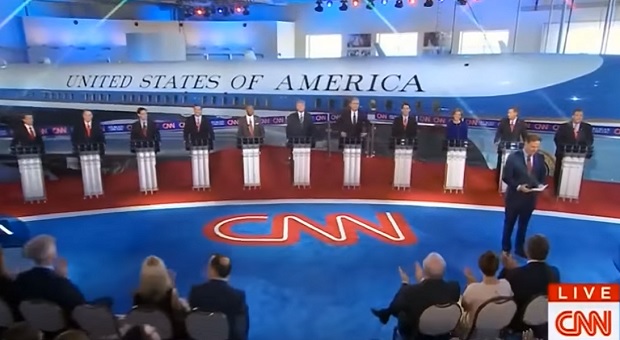 The War Between The GOP And Mainstream Media

It’s no secret that the media is heavily leaning towards the left. Regardless of their protestations of innocence and declarations of neutrality, their words and actions say something else entirely.

When the members of a news organization donate overwhelmingly to one party (85% to 15%), it’s clear where their sympathies lie. In such a case, the ability to remain neutral in their work is all but impossible.

This has become extremely clear in the presidential debates. The first Democrat debate was a love-fest for Hillary, with Hillary and Bernie Sanders working overtime to out-promise their supporters a whole new collection of freebies. In stark contrast, the Republican debates have been filled with gotcha questions and attempts to get the candidates to turn on one another.

All this came to a head in the third Republican debate, sponsored by CNBC. Why the GOP would even let a liberal news organization host one of their debates is beyond me, but they are.

It was clear from the opening moments of the debate that the “moderators” didn’t see this as an opportunity to get the candidates to talk honestly about their opinions, vying for voters, but rather a chance to collect sound bites on the candidates, which they could use to discredit them.

Then, once the debate was over, the “fact checker” went to work. Of course, like most fact checkers working for the media, the only “data” they draw on is that which supports their political view. So, that would make anyone who denies global warming a liar and one who doesn’t believe in science, even though there is no true science to back up global warming.

It’s interesting that the same fact checkers who were so anxious to verify every word that the Republican candidates said, didn’t do any fact checking on Hillary and Bernie. I guess they felt they didn’t need to, because a Democrat politician wouldn’t say anything against the progressive liberal narrative.

The gotcha tactics didn’t work too well for the media this time. Not only did the candidates do an admirable job of avoiding the gotchas, but they turned the tables on the media, attacking them for their obvious bias.

Starting with Ted Cruz, several of the candidates blasted the media for their childish actions and ridiculous questions. It was clear to all who watched what was happening and how the liberal media was trying to turn the debate into a circus.

Republican candidates are beginning to react to this, stating that they will not participate in future debates hosted by the mainstream media. While this hasn’t gained momentum yet, it could very easily do so. Were that to happen, they could kick the mainstream media right out of the debate process.

Of course, the obvious counter on the part of the media is to refuse to broadcast the debates. While that would be tragic, I’m sure that alternate media would pick up the debates and make sure they got out to the people.

We have to realize that there are actually four main political parties in this country and not just two. Of those, only two are voted on, the others are self-appointed. Those two extras are the media and the bureaucrats. Unfortunately for conservatives, they have aligned themselves with the progressive liberal party of the Democrats, creating an uphill battle for conservatives to get anything done.

This is why liberals can say that they represent the mainstream view in the country and that conservativism belongs with the dinosaurs.

Keep in mind; that’s with polls showing that the country is 47% conservatives, 30% call themselves moderates and only 23% identify themselves as liberals. But the only ones the liberal politicians hear are the liberals who surround them. Remember what Obama said after the mid-term elections? “I’ve heard the voters, and I’ve heard those who didn’t vote too.”

Hmm, I wonder what those who didn’t vote said. Would anyone be willing to bet that they said something other than what Obama wanted to hear? No, that would be a sucker bet. What he clearly said was that he was going to ignore the voice of the voters, instead listening to the voices in his own head.

So, where does this leave us?

It’s clear that the media is stoutly against anyone who is a Republican, as well as all conservative ideas. It’s equally clear that the vast majority of the government is as well.

Oh, there are a few departments of the government who are right-leaning, like the military, the FBI and the CIA, but they are definitely in the minority. The vast sea of bureaucrats out there need for government to grow, so that their own status can grow as well. That alone aligns them with the progressive liberal camp.

Sadly, much of the GOP leadership is more strongly in the left’s camp, than they are in the right’s. They have been captured by the system and are hearing the same sorts of messages that the Democrat politicians are hearing. This has made them so disconnected from their voter base, that they no longer recognize what the people who voted them into office want.

This lack of unity in the Republican party has been disastrous in past years and it continues to be disastrous. They want a moderate candidate, like Jeb Bush, but the voters have clearly rejected him. If they continue to push, and put another moderate candidate forth as the Republican candidate in the general election, conservative voters won’t turn out and the Democrats will win.

Each election we have had in the last 20 years or more has been more critical than the last. It is clear that the progressive liberals are pushing for a one-party system, with their party as the only one standing. If that happens, then the country will surely become socialist.

That would be a major win for the liberals, giving them the ability to go after our 1st, 2nd and 4th Amendment rights, without opposition. We could expect our guns to be confiscated, our religious freedom severely curtailed (for those of us who are Christian or Jewish) and our freedom of speech limited to whatever the PC police decide we should be able to say.

Hillary has already said that she will not only continue taking the country in the direction that Obama has been taking it, but that she’ll double down on some of his initiatives, taking them even farther. Yet she’s the media darling, the one that all the pundits are declaring should be the next king, or queen of the United States.

I have to say, it’s not looking good. The media has the power to sway any election and have done so in the past. By ignoring a politician or showing them in a bad light, they change people’s votes and they know it. Why do you think they are ignoring Ted Cruz, the most conservative candidate running?

Regardless of where you stand politically, Ted Cruz is recognized as a true conservative and one who has taken on Washington, battling against his own party, as well as the Democrats.

He went to Washington with a mandate and seems to be one of the few who has not forgotten it. Yet he is being marginalized by the media, who are spending all their air time talking about Trump’s latest outrageous statement.

So, I ask again, where are we going?

Conservative talk show host Mark Levin has prophesied that the Republican party is going to split. If it does, it will be disastrous. That would be a win for the Democrats, as neither of the new parties would be able to muster enough votes to win anything.

Since the RINOs who control the Republican party are faster to capitulate to their Democrat masters than they are to their own voters, the Democrats will win. They will have their one-party system in fact, if not in name. They will be able to win whatever they want and pass any law they choose. Such a move would truly be the end of conservativism in this country.

The Republican party needs to return to its roots. What roots? The roots of their voter base. It’s time for them to hear what we the people are saying and take heed. That’s the only way that the United States has a chance of returning back to her roots. Anything else allows those that want to make it the Socialist States of America to win.