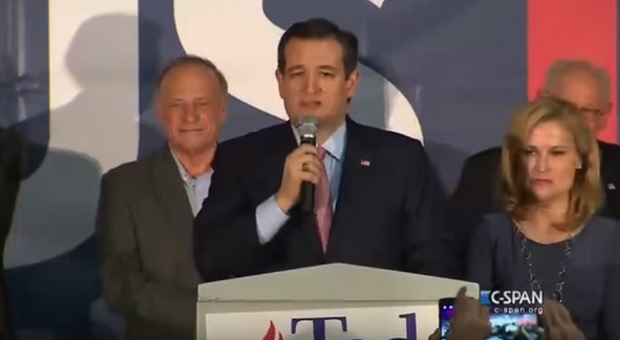 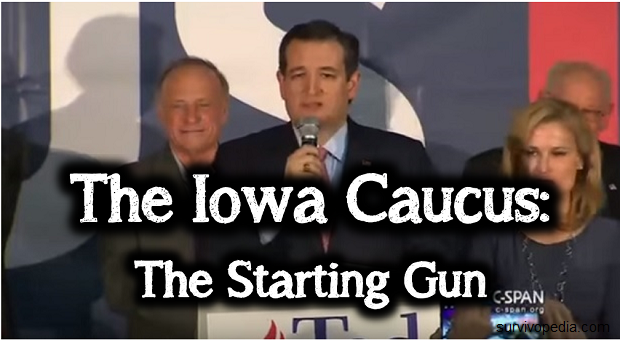 This time, the polls were wrong; and that might actually be a good thing. Has the polls been right, Donald Trump would have won the Republican caucus. That might have been enough to show everyone that his ultimate nomination was inevitable, affecting the rest of the primary season. But as it was, he was beaten out by Ted Cruz, totally transforming the fabric of the primaries.

The Democrats – The Undercard Event

Of the two, the Republican primary was much more interesting than the Democrat one. And I’m saying that because the Democrat race for the nomination has basically been a contest between Bernie and Hillary to promise the most freebies to anyone who votes for them.

There was one other Democrat candidate who was hanging around the fringes of the primaries, Martin O’Malley. Sadly for O’Malley, the media basically ignored him, making his ultimate demise inevitable. Maybe if Hillary gets indicted and loses her place as the presumed candidate, he can come back in the race and give Bernie a run for his money; but for now, it’s so long Martin.

O’Malley got less than one percent of the vote, which left a touch over 99 percent for Bernie and Hillary to fight over. Surprisingly, the difference was so close that they had to do a coin toss in six different districts. All six times, Hillary won, giving her the edge over Sanders, with a final count of 50% to 49%.

There’s been some word that the Democrat caucus wasn’t exactly honest and that Bernie should have actually won; but I doubt much will come of that. Democrats are crooked and so it’s not surprising that their caucuses are too. Besides, the Iowa caucus is only about one percent of the total delegate votes, meaning there is still plenty of time for both of them.

The Republicans – The Main Event

On the Republican side, we saw a lot of action. In a sense, that’s a bit funny, because the Democrat Party’s way of holding caucuses is much more animated and exciting than the Republican one is. But, in this presidential race, all of the interesting activity has been on the Republican side; everyone expects Hillary to get the nomination for Democrat queen, so the contest is almost a joke.

The crowding of the Republican field has been part of what’s made it interesting. While a few have dropped out, including one who gave up after the Iowa caucus, there are still 10 candidates who are running for the nomination. But the real contest is down to three of those candidates.

While Ted Cruz was the first to announce his candidacy and Jeb Bush was presumed to be the Republican establishment’s choice, it has been Donald Trump who has dominated the race up to this point. His brash manner of expression, saying things that seem politically incorrect and inflammatory, has captured the news media and kept his name in front of people all across the country.

Actually, Trump has run a masterful campaign, at least from the viewpoint of publicity. He has probably written a few new chapters in any political operative’s plan book, with his total domination of the news and his manipulation of the media. Where most politicians are wary of the media, even Democrat ones who the media is in love with and protects, Trump has called them out and challenged them to ignore him. His in your face manner has kept the cameras on him, saving him money on advertising, as the media has done it for him.

But a good publicity campaign isn’t quite the same as a good political campaign, as I suspect The Donald is finding out. While Trump has gained a lot of attention and popularity, he hasn’t build the grass-roots infrastructure that is needed to get the vote out. This showed in his failure to win the Iowa caucus, even though polls put him 10 to 20 percent in the lead.

There were actually two upsets in this caucus. The first was Ted Cruz, who stole Trump’s place as the number one candidate. Winning by 4 percent, Cruz showed that he had the solid backing of conservatives and evangelicals. He received more votes in the caucus than anyone else in history.

That was a definite flip-flop, after the way Trump has led in the polls. Whether or not it is indicative of what’s going to happen in other states has yet to be seen. But by upsetting Trump’s apple cart here, Cruz has ensured that the primaries will be a contest and not just a love-fest for Trump.

Part of Cruz’s strategy has always been to position himself to gather in Trump’s voters when Trump inevitably imploded. But that’s not what we saw happen. Trump chose not to go to the debate in Iowa, which many think insulted the people of Iowa. If it did, that could explain his loss of votes. But even then, the surprise for Cruz was that those voters went to Marco Rubio, not to him.

That has made this a definite three-man race. Ted Cruz won the caucus, with 28% of the vote, Donald Trump came in second, with 24% of the vote and Marco Rubio came in third, with 23% of the vote. While Cruz clearly won, it wasn’t by a landslide. There is no question that the other two are still in the race. As for everyone else that’s running, I think they’re going to get the consolation prize as “has beens,” even the likable Dr. Carson.

This split between the three of them is extremely interesting, as well as being very unusual. We actually have three totally different political positions here. This isn’t choosing between one guy who wears a black suit and one who wears a navy blue one, this is between red, blue and yellow.

Cruz is the true conservative, with a reputation for being the most conservative member of the Senate; Trump, the populist, with an almost cult-like following (a bit reminiscent of Obama there) and Rubio, who the establishment has backed as their own moderate candidate. 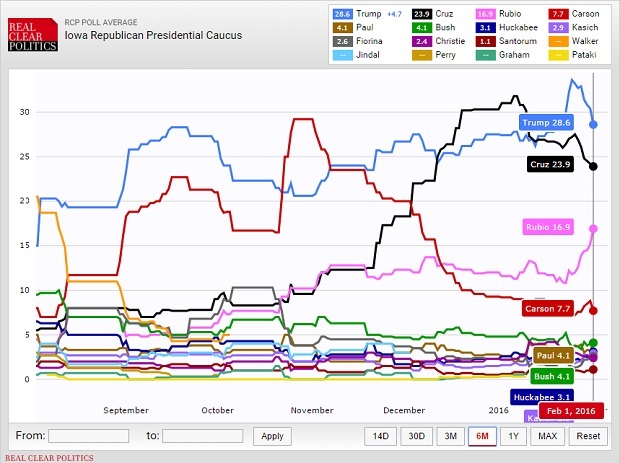 What’s Happening to the Republican Party?

Just looking at those three candidates and their differences, it’s clear that we’re seeing a clear division in the Republican Party. For several years now, the party leadership has been at odds with their own voter base. While there are Republican voters who are conservatives, the strength of the party has been its conservative base. Yet, the leadership has sought to put forth moderate candidates, thinking they could garner more of the minority vote. Yet in the process, they’ve alienated their own base.

Now the base has a true conservative candidate they can get behind and they are doing so. If no other lesson comes out of the Iowa caucuses, that one does. This is a mixed state, yet there were enough true conservatives in it to catapult Cruz to the top spot in the caucuses. That means that he’s likely to have an even bigger lead in states which are truly conservative.

While Trump has a healthy following, there is still a chance that he will fall. If he does, it will be hard and fast. Each time he comes out with another one of his outrageous statements, there’s been risk associated with it. Granted, it’s been a well calculated risk, with him merely repeating what a lot of the American people are saying, but it’s still a risk. All it would take is one of those statements backfiring and he’d end up on the sidelines.

So the real race to watch at this point would be the race between Cruz and Rubio, at least from seeing the future of the Republican Party. While the establishment has thrown their weight against Cruz, it appears that the people have thrown their weight in favor of him. If Cruz wins the nomination, it could serve as a wake-up call for the party and an opportunity for some real realignment of the party’s priorities.

But of course, that would require the Republican Party’s leadership listen to the people and what they are saying. Sounds a bit far-fetched to me. Washington has gone so far from listening to the people, that I’m not sure they can learn how to again. Cruz listens, but he’s only been there one term; he probably isn’t infected yet. Few others do and those are also relative newcomers to the Washington scene.

I’m not going to tell you who to vote for, that’s your decision to make. But I will ask that you make an informed decision. Decide what you stand for and then see which of the candidates stand for the same things.

Even more importantly, see which ones stand for the opposite. The last thing you want to do is vote for someone who’s stated position is the opposite of one of your own closely held values, regardless of what else that candidate says.