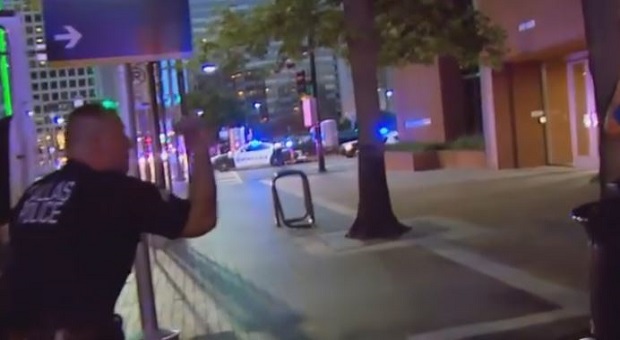 War Against The Police. Whose Lives Matter?

Ever since the shooting of Michael Brown in Ferguson, Missouri, almost two years ago, the rhetoric against police officers has been running high. Members of the Black Lives Matter group have repeatedly called for the killing of police officers, especially white police officers.

Well, now it’s happened. The first salvo in the war against the police has been shot and it was a devastating salvo.

On July 7th, people who claimed to be part of Black Lives Matter staged a demonstration in Dallas, Texas, protesting the killing of two young black men in other parts of the country.

While it doesn’t appear that the organizers of this event had any plans for violence, there was at least one other, not associated with Black Lives Matter, who had their own agenda. This 25 year old man, Micah Xavier Johnson, opened fire on the police from a sniper’s perch; killing five and wounding six others, in addition to two civilians who he wounded.

Johnson, a former military reservist, was sent home from Afghanistan in 2014, charged with sexual harassment. Even though his file was flagged for a “less than honorable discharge,” he was honorably discharged and returned to his home. Little was heard from him since then.

He had no police record, had not committed any other crimes and basically lived a quiet life, focused around his love of basketball.

But underneath the surface, there were things going on in Johnson’s heart and mind. He was hearing the message of Black Lives Matter, especially the call for violence against the police. He was also hearing an anti-American message at his mosque in the Dallas suburbs.

Who is to Blame?

Regardless of who actually pulled the trigger, it appears to me that some blame can be placed on the Black Lives Matter group, even though the killer had no association with them. We have no way of knowing for sure, but it’s quite possible that Johnson was at least in part motivated by those calls to violence.

That’s a hard question to answer; but if the same standard is applied, which is used for pastors who preach against homosexuality, then those who have been speaking publically about killing cops, are as guilty as the man who pulled the trigger.

Johnson, who goes by the name “Micah X” was apparently named after the Black Nationalist leader Malcolm X. Both belong to the same group, Nation of Islam, where Malcolm X rose to a position of leadership. The mosque which Micah X attends, is apparently part of one of the branches of Nation of Islam (the organization has split since Malcolm X’s time).

The Nation of Islam is a black organization, loosely tied with Islam. I say loosely tied because from what I know of Islam, they would at best shunned by most Muslims and at worst killed as apostates. I think they are more a racist political revolutionary group, than they are a true expression of religious belief of any sort. While they claim to be Islamic, their version of Islam has been culturally adapted to the American Black community.

Islam has been attractive to some American Blacks, especially anti-white blacks, for the same reason that it was attractive to the Arabs in the Middle East during the Middle Ages. Christianity was and is seen as the white man’s religion, by those who oppose it, even though there are many black Christians.

Islam offers them an alternative; something that is decidedly not white. For that reason alone, blacks who blame their suffering and poverty on whites, flock to Islamic groups like the Nation of Islam and the New Black Panther Party.

But when you mix radical Islam with militant revolutionary ideas, then feed it to people who are disenchanted with society, you have an explosive mixture. That’s what happened here. Micah X got a strong dose of these teachings, which resulted in him taking violent action.

While the Nation of Islam isn’t associated with ISIS and their theology is doubtful, they still play into the hands of radical Islamic goals. By inciting violence and violent rhetoric, they cause unrest, creating fertile ground for the recruitment of more members to the ISIS ranks. But even those who choose not to join ISIS can still take their part in global jihad, by participating in acts of violence here at home.

So, whether or not the Nation of Islam is truly Islamic or not, is ultimately inconsequential. They are working towards a similar goal. While the members of these groups have their own vision for America, they don’t have the numbers of the true Muslims. Eventually, they will have to fully convert to Islam, or they will be cut out of the victory.

With that in mind, the shots that Micah X fired, could be the opening salvo in the war against police. Black Lives Matter, the New Black Panthers and others have been calling for this war since Ferguson, now it looks like they have it. The question is, where does it go from here?

Video first seen on Face the Nation on CBS.

You may think that I’m being premature or presumptuous in calling this a war against the police, but the attack in Dallas was not the only attack to take place. While it was the largest, and the killer claimed to not be affiliated with any group, there were several other attacks against the police within the same 48 hour window. That’s too much to call it coincidence.

Protests happened around the country, for the same reason as the protest in Dallas. While some were relatively peaceful, doing nothing more than blocking traffic, there were others which turned violent. A number of police officers were attacked, either wounding or outright killing them.

Atlanta, Miami, Fort Lauderdale, and other places, Black Lives Matters demonstrations were held. None became as violent as the one in Dallas, nor was there the violence, looting and destruction that we’ve seen with Black Lives Matter in the past, but they weren’t exactly peaceful either.

I believe that we’re going to see an escalation in violence against the police, even while the founders of Black Lives Matter are trying to reduce the violence in their own organization. There are always others who copycat the actions of criminals, especially those who gain national media attention.

Must like the mass killings that have been going on, others will follow in the footsteps of Johnson, seeking to emulate and improve upon his success.

That’s not to say that I’m in agreement with the federal government militarizing administrative departments. I can see no reason for many of the feds to be armed and militarized like they are. They are not police organizations, so they don’t have the same needs the police do.

But the police do have needs. They are still the thin blue line that protects us from the barbarians. With the ever-increasing risks of terrorism, including domestic terrorism caused by the extremist groups that I’ve been mentioning, police need to be able to defend themselves. They also need to be able to count on the support of law-abiding citizens, whether that be merely verbal, or in going to assist police officers when they are in a shooting situation.

I did that once, stopping to help a police officer who was outnumbered and quite possibly outgunned. As a member of my state’s National Guard, I felt a responsibility to help that officer. Fortunately, I was in uniform at the time, so he was able to recognize me as a good guy. Nevertheless, by joining forces with him, I was able to change the equation, making it so that he was no longer outnumbered.

Yet today, there are those who are working to undermine that support. The media reporting and liberal rhetoric that surrounds each of these shootings, has been the cause of much violence. Every time a white police officer is forced to use deadly force against a young black criminal, the police officer is tried in the court of public opinion and found guilty, before the facts are truly known.

But then, the news media has given up on facts anyway, preferring to stick with liberal talking points instead.

A lot of the blame for the deaths of those police officers can be laid right at the feed of those same news anchors and reporters. If they weren’t so quick to act as left-wing propagandists and instead did their job of finding out the facts and presenting them to the public, people would know that police are less likely to shoot a young black man, than they are to shoot a white one.

But then, that doesn’t match their liberal talking points, so they won’t bother to say it.