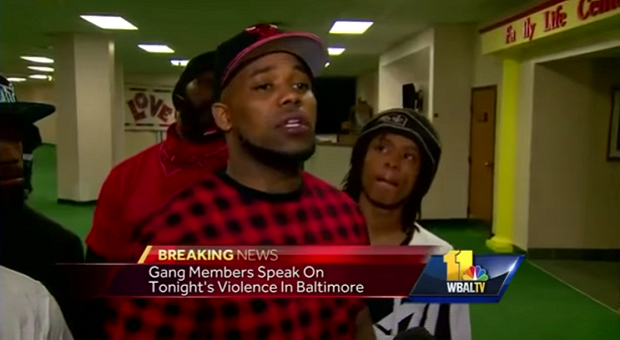 Baltimore Watch: Gangs Going Up Against The Police

We don’t normally like to talk about the same story two weeks in a row, but so much has happened in Baltimore in the last week, that we feel like we need to return there once again.

This event has grown beyond being a local event and could easily have nationwide ramifications.

First of all, there’s the violence. Okay, that’s not really much of a surprise. We’ve seen violence in every one of these situations; but it’s accelerating. In one night alone, the rioters managed to burn 144 cars and seven businesses.

Many of the cars were damaged before burning them and the stores were looted before being burnt; but that number far exceeds what we saw in the Ferguson riots. It’s clear that there is an acceleration of violence going on in these events.

Speaking of accelerating violence, the violent acts weren’t limited to just Baltimore. It seems that rioting started up again in Ferguson, in support of the rioting in Baltimore. These cities are becoming powder kegs, ready to explode at a moment’s notice. At this rate, every time a young black criminal is killed, we’re going to see cities all over the country erupt in anger.

That’s not to say that all the blacks in Baltimore were violent, or even that all the protesters were. There was a solid majority of local citizens who protested peacefully and had nothing to do with the violence.

It appears that most of those who were involved in the violence were actually imported from out of town. This happened in Ferguson too and it’s even more obviously happening in Baltimore. It seems like those who are organizing this violence don’t feel the need to keep their activities hidden, like before.

Then there are the “celebrity voices” speaking out against the police. Al Sharpton has been a little slow on the uptake with this one, but is reportedly on his way to Baltimore to take part in stirring up racial division. But he’s been well represented by Michael Moore, the overweight, loudmouthed film producer, who seems to have something to say about everything.

Moore went on record making two demands. I’m not sure what makes him think that he has any right to make demands, but he’s a liberal, so it’s not all that surprising. His first demand was to release every black from prison who’s not there for a violent crime. So, all the drug dealers, thieves and pimps get a free ride. The second demand is to disarm the police. Moore said, “We have 1/4 billion 2nd amendment guns in our homes 4 protection. We’ll survive til the right cops r hired.” (sic)

You know, if I didn’t know who Moore was, I’d almost think that he supported the 2nd Amendment from that last statement. But we all know better. One of his favorite drums to beat is the one for taking all our guns away. So, this wasn’t a statement in support of our rights, but mere sarcasm.

By the way, just in case you didn’t hear. Moore’s bodyguard managed to get himself arrested for carrying a concealed weapon without a license. So, I guess he’s showing once again that the laws don’t apply to the leftist elite, just to the little people.

I’m sure that Moore would have something different to say about it if those prisoners that were released were housed in a halfway house across the street from his mansion. He might want them released as a political statement, but the fact that he has armed bodyguards makes it clear that he doesn’t want to have to deal with them himself.

While the whole story hasn’t come out yet and probably won’t for several weeks or months, apparently the police aren’t squeaky clean in this one. The state District Attorney’s office has decided to pursue charges of murder against the six police officers who were involved in Freddie Gray’s death. The specific statement made was “We have probably cause to file criminal charges.” Whether those charges result in convictions or not is up to the courts.

But the big news this week comes from the gangs. The Crips, the Bloods and the Black Guerrilla Family have decided to put their differences aside, bonding together in a partnership to, in their words, protect their communities. The Criminal Intelligence Unit of the Baltimore Police Department had a different take on it, saying that there was a credible threat that these gangs were intending to “take out” police officers.

The real danger here is open warfare on our city streets. The police aren’t likely to lay down their arms, nor are they going to quit in large numbers. They will see this as a direct challenge; one that they need to meet head on. While I don’t expect police forces to go on the offensive based on nothing more than a report, you can be sure that they will take all necessary actions to protect themselves.

That is already happening, with the Baltimore police and others changing procedures and insisting on two officers per patrol car. I wouldn’t be surprised if it became standard procedure for police to call for backup on any stop, at least for a while. The police probably won’t fire the first shot in this fight, but they will be ready when the gangs do.

Since all three of those gangs have pretty much a nationwide presence, we can count on whatever happens in Baltimore to spread rapidly to other major cities across the nation. Cities which have been unaffected by the protests up to this point, may suddenly find themselves embroiled in open violence and even gunfire on the streets.

It is a good time for all of us to check our hole card. There are still too many unknowns in this story and too many variables. While it may all quiet down after a few days, that’s not very likely. Without true leadership from a voice of reason, there is nothing to calm it down.

As we’ve seen, that voice doesn’t exist. Oh, there are plenty of voices which can be called voices of reason, but they aren’t the voices being listened to. The ones people are listening to are the ones which incite violence, hatred and broaden the racial divide that is broader than it has been in 50 years.

Oh how we need a Dr. Martin Luther King, Jr. today, who has a vision for peace and equality, not for making others suffer for their grievances.