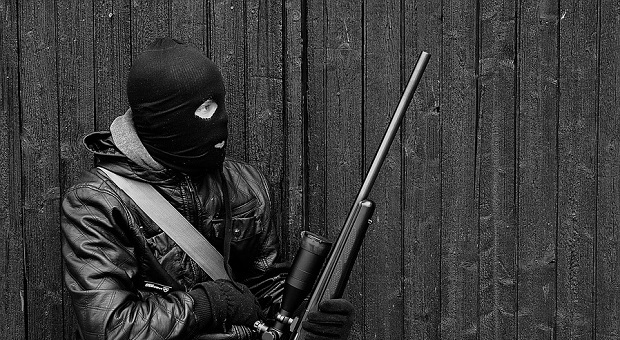 I must start off by saying that walking through the mind of a terrorist with my dainty little feet is no easy task. These individuals are some of the most perverted, disgusting, sad excuses for living beings that we will ever know in this world.

But, clearly, they are not stupid.

Nevertheless, if we are to put an end to their attempts to ruin our culture, we must understand what they see as our greatest weaknesses and extrapolate how they will move to exploit them. It is my sincere contention that gun control is something terrorists love because it creates a weakness they can exploit at every level of our personal and social existence.

I feel, if there is one pet rabid viper of terrorists that we have nursed to our bosom in this society, gun control with its gun grabbing fangs is it.

Even though there is no such thing as an issue that everyone agrees on, matters surrounding autonomy and self defense are of major interest to terrorists.

Since their goals usually include harming people and spreading fear, they absolutely laugh with glee when one group seeks to disarm another within the same society; especially when the people being disarmed (example veterans) are the ones terrorists want to murder.

“Divide and conquer” is one of the simplest and most effective strategies when it comes to spreading terror and winning wars. The insanity of gun control itself within the context of a homeland proven unsafe from terrorists is like a free lunch to them. Any terrorist worth his or her title can do any number of things to divide us even further:

Prohibition and the war on drugs offer ample evidence that there are some places where law, and the attempt to enforce them does more harm than good.

Quite frankly, if people want to own something, buy something, or do something, they are going to try and achieve their goal no matter who or what stands in the way. When a government such as ours seeks to regulate guns among a population accustomed to having them, it is a recipe for disaster.

Here is what terrorists see each time a gun control measure is put in place:

Nowhere on Earth do the laws of supply and demand work so well as in the black market. The more laws you make against guns, the more people are going to want them. Since terrorists are fully capable of making guns and smuggling them into the country, rest assured that they can, will, and do make a fortune on black market trade.

Just as an example, do we really know how many black market machine guns (I mean the real kind, not some glorified hunting rifle like the AR-15) are out there and in the hands of terrorist sleeper cells? We can never know that answer anymore than we can know how many tons of illegal drugs are on the streets at any given moment.

The fact of the matter is anti-gun laws are about as realistic as a spouse thinking his/her partner isn’t cheating just because of a marriage certificate. Just because statistics show one thing or another, that does not mean specific married people aren’t tom catting under cover! “Out of sight, out of mind” does not mean these weapons are truly gone.

They may well be in the hands of radical Islamic terrorists who are just waiting for the right moment to use them. Sadly, this problem does not exist just here in the United States, it exists in every single nation that has gun control.

Not only are criminals and terrorists manufacturing and selling weapons at a profit, they are doing so at an incredible profit that goes right back into advancing their disgusting plans.

As strange as it may sound, I feel there is also a second way that gun control puts money in terrorist bank accounts. Consider a situation where you are fed up with the level of incompetence that seems to be coming from the US government. Now let’s say you are a citizen of a foreign country where ISIS, Boko Haram, or some other terrorist group is taking over at an accelerated rate. If you are looking for safety and security, how can you trust in a foreign government that is moving to disarm its own people in the face of the same terrorist threat?

The fact of the matter is right now there are millions of innocent Muslims and Africans that were either kidnapped by terrorist groups or their towns and cities are occupied by radical Islamic terrorists.

Each and every one of those people knows they wound up in this situation because their own governments were successful in imposing gun control and confiscation. If you, as an individual are thinking about your own future, wouldn’t you see more advantages to turning against a government that seems to be turning against its own people and their right to self defense?

I feel this is precisely how gun control puts money in the bank accounts of terrorists. I also feel it explains why people in the Middle East seem both apathetic and hesitant to do what the United States asks them to do.

If terrorists are to achieve their goals, they must do so in a way that maximizes profit and reduces risk. When the person or people you want to kill or injure are well armed, then you it will cost you more to achieve your goal. Should that person, such as a veteran or active member of the military also be trained well enough to use that gun to maximum advantage, the price associated with murder goes even higher. Now let’s have a look at how gun control is selectively lowering the price paid by terrorists that choose to attack veterans right here in the homeland:

Gun Control Does not Solve the Real Cause of American Discontent

It would be tremendously ignorant and naive to say that US citizens are happier today than they were 8 years ago. Not only do we grapple with rising prices, rising taxes, and shrinking wages, but there is a definite sense of misery across the land.

Just take a look at pictures of yourself from 2007 and compare them to recent ones. Do you smile or laugh less when at parties or with friends? Did you wind up starting on anti-anxiety and anti-panic medications in the last 8 years?

Do you feel like you are trapped in an endless mire of debt, taxes, and obligation to others? If you answered yes to these questions, then you know exactly what I am talking about when I say the general feeling across our nation is “misery”. You also know that job losses, relationship failures, passing on of family members, and other sad events cannot wholly account for what you may be feeling inside and seeing in the faces and actions of others.

Now let me be clear here and say that for most people, there can be no joy in hearing about children, veterans, and others murdered with guns.

To say that NRA members (many of whom are doctors, nurses, veterans, and members of law enforcement) or other gun advocates do not feel these losses is beyond ignorant; especially when those truly enjoying the spectacle are radical Islamic terrorists and others determined to destroy our nation once the citizens are disarmed.

No matter how gut wrenching these deaths may be, it is time to stop preventing one group or another from having guns just because they “might” commit a massacre. It is time to do the opposite – it is time to arm more people so that terrorists and criminals alike have more enemies to contend with, and must pay a higher price for every life they take or try to take.

If there is one explanation for the rise of “radical” candidates such as Donald Trump and Bernie Sanders, it is the general state of unhappiness in our daily lives. Instead of having real, meaningful conversations about how to bring joy back to our nation, we spend endless hours fighting over a few hunks of metal that just happen to be some of the best tools for self defense.

Historically speaking, terrorists have already seen how unhappy people seek to impose gun control, and then become easy targets for terror attacks. I feel this is very much what happened in Nigeria, and is ongoing as we speak in France, Germany, and right here in the United States.

In this election, the issue of gun rights is one that I feel every prepper should use as an absolute litmus test. We, as nation under attack by terrorists right on our own soil, should not be limited in gun ownership just because guns are used to commit mass murders or other crimes.

The fact remains that terrorists, like criminals will attack where it is cheapest and easiest to do so. In my opinion, the best way to drive radical Islamic terrorism (and other kinds) out of business is for every person to be well armed with guns, thus driving up the price every terrorist must pay to kill and spread mayhem.