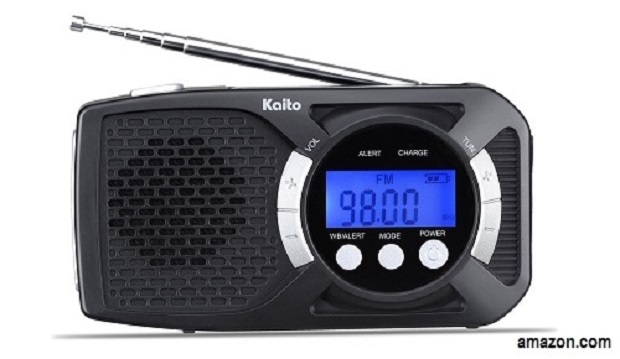 One of the most often overlooked basic necessities for serious prepping is the self-contained ESR (Emergency Survival Radio).

You might have been of the mindset that everything you need to know about emergencies in your area can be discovered with a couple swift moves of your index finger on you smartphone or tablet. Or on the breaking news channel on your nice high-definition flat screen TV.

And if for some reason those weren’t working, you could always resort to your reliable little AM/FM radio you keep somewhere in one of the kitchen cabinets. If it was good enough to pull in George Noory on ‘Coast to Coast AM’, in those wee hours of the morning when you couldn’t sleep and sat up sipping your hot cocoa waiting for the sun to rise, it should be good to go for some emergency update when you needed it, right?

Wrong. What if the emergency was a major power outage?

An EMP, or any number of catastrophic events which causes electricity to be the first casualty of the day?

If you don’t have a battery radio with fresh batteries, or the ability to recharge without plugging it in, you might not have it working good enough or at all, just when you need it the most. Like you’re hearing unusual explosion type sounds in the distance and you are trying to make a critical decision of bugging out or not, and need to know what‘s going on in your immediate area and the extent of the situation.

Batteries will usually be dead or too weak if they’ve been sitting too long in your radio. And standard small AM/FM radios have limited local range for the most part, and if the broadcasting origins are standard commercial stations, they simply might not be broadcasting any emergency details that would help you. Or they might be ’out of order’ themselves due to the emergency.

ESRs are intentionally purposed for off grid survival and not to be confused with a weather radio only. ESR’s perform some additional necessary functions in a bad situation.

Depending on the extent of the disaster scenario and what or who caused it, cell phone transmission capability might be also be dead. Governments now have terminal site kill switches for the servers, and cell towers are easily manually/computer disabled or sabotaged. They have been working on an internet ’kill switch’ and likely have it already.  The G, of course, already has its own proprietary parallel internet and secured closed satellite communications systems, and doesn’t care if you can’t use yours. You need something better.

National Oceanic and Atmospheric Administration (NOAA) and other dedicated radio stations are ubiquitous and independent of standard commercial television and internet program transmissions.

Even after a major EMP event, if your ESR has the capability to reach out you’ll still likely find some broadcasts coming through somewhere to inform you of what is happening. This will be increased with advanced bandwidth and reception capabilities especially if your ESR receiver has short wave capabilities.

All ESRs Are Better than Nothing, but Some Are Much Better

An emergency radio usually means that it works in any emergency where standard equipment does not, because it doesn’t depend on the  normal modes of operation like cell phones and other methods of info reception. It doesn’t need to be used through the standard power grid or even utilize batteries if they become dead and replacements are not available.

A good emergency radio will have at least two ways to power it. Most are battery operated but also have a hand crank dynamo/charger, but the better ones include all four power options:

Now THAT’S what you call power back up! They usually have other options such as lights and USB ports to aid in your general survival needs.

So the best ESRs will have the above functions and also a wide band range, possibly even a short wave reception capability with a  NOAA  weather specific service, be relatively compact and light enough to fit in your bug out plans, AND…not break the equipment funding bank!

National Oceanic and Atmospheric Administration it’s a scientific action group that monitors all the weather and provides your television stations with the satellite photos they use for their own weather programs. A NOAA receiving radio is your best source of direct in progress weather information, even better than TV or standard radio weather forecasts, which broadcast on a prescheduled program because you can tune it only to instant live updates of your local areas anytime of the day.They are linked to dedicated local weather ‘spotters’ or equipment to determine on the spot wind speeds, rainfall, etc. And most radios with NOAA channels also have an option panic alert which sets off a beeping or loud alert tone if a bad storm, tornado watch or warning, or meteorite, volcano eruption, earthquake, UFO landings, attacking cannibal Zombie group, or escaped zoo lion is heading your way.

I’ve had dozens of various models and although there are many out there and some of you might have your own ideas or requirements, these choices represent my own opinion based on versatility, capability, and cost effectiveness. Yes, you can get some two hundred dollars plus models in weather radios because they have concert quality Bose style speakers and  best reception antennas available, but a lot of these don’t have the above survival criteria. I can’t qualify it as a true ESR unless it at least has some sort of backup power supply and a NOAA alert option.

While there will always be differences of opinion depending upon subjective experience and other factors, this is just a  list of what most survival people currently consider to be the most popular best bang for the buck.

But with technology changing so rapidly, who knows what better stuff is coming down the road? And if you don’t have one yet, at least get something now, and it never hurts to have another cooler one for back up later on when they come out with something that also has a built in satellite TV, tablet, and beer cooler. 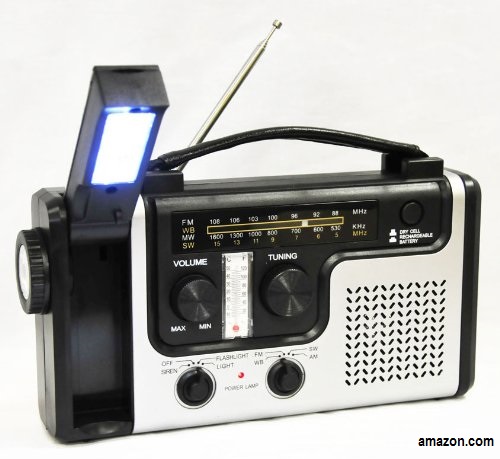 If you want an ‘almost’ pocket size compact ESR with no less than SIX ways to power/charge it, with a NOAA function and alert and flashlight AND for the least expense, this might be it, and it costs only 35 bucks! 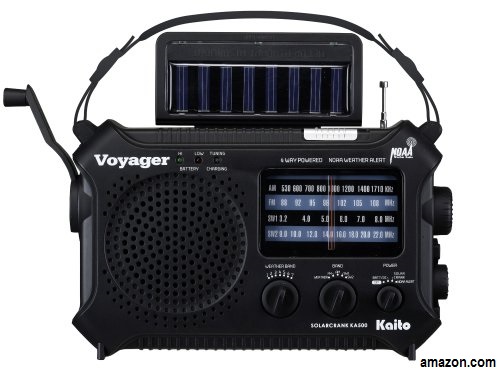 Kaito makes different versions from the 440 through 600 pro models from about $40 to over a $100. All nice radios with all the good stuff.

The biggest difference is in the digital or analogue display versions and some interesting options like SW reception. Some preppers think it’s better to have the analogue frequency display because it might be less susceptible to damage or failure to display. 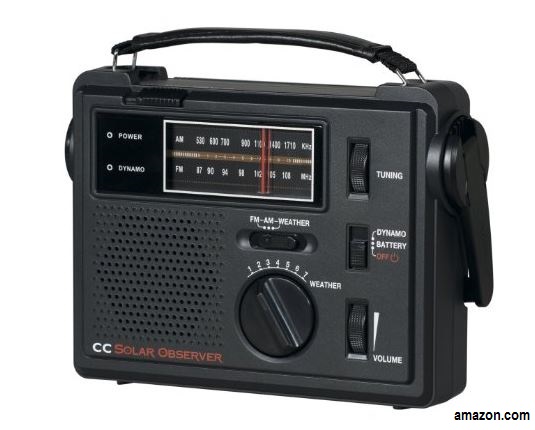 Crane radios are somewhat pricey but well established and there are several models including good short wave/Ham radios. This Solar Observer model is pretty reasonably priced and has what you need, if not anything additional for around 60 dollars. 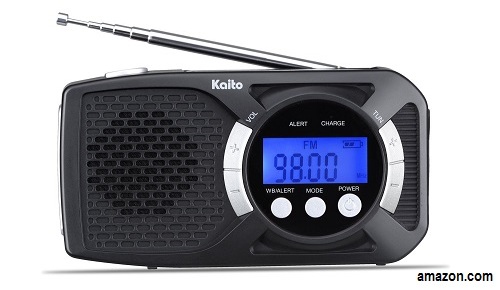 It’s hard to beat Kaito radios for bang for the buck and decent quality judging from their popularity growth in the last couple of years. This is their smaller pocket carry model with multiple features for its size like a solar panel it can run off directly without batteries. And it has a stand-by mode that automatically starts the radio message if the government is issuing one of those emergency alerts you sometimes hear over standard broadcasts as a ‘test’ with that raspy bleep noise. Can’t beat it for around 30 bucks. 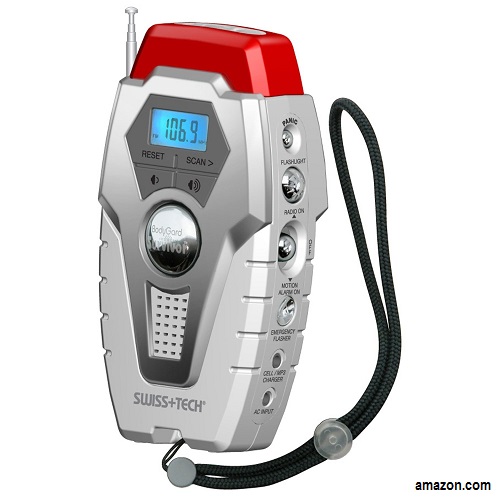 This is the ’Swiss Army Knife’ of ESRs, and one of the lightest and most compact models with good additional function we’ve come across. If you must have one for minimalist use only due to you absence of a non-permanent BOL or to carry in a solo back pack bug out scenario. This would be a good one to have for all its additional utility for around 40 bucks on E-bay or Amazon.

Again, you can search the Web and see dozens of different ESR models to pick the one that most suits you. And there are decent big brand names like Midland and Cobra mainly known for their compact two-way communications radios sold in Home Depot and elsewhere, but they also make NOAA weather alert and  perhaps by now they have an ESR model.

And there are even some dirt cheap ones with NOAA service for under 15 bucks which are better than nothing, so check them out, read the reviews, and get one you like that best suit you and your situation. There’s really no excuse not to have a dedicated ESR these days. Once you get used to using it for direct weather forecasts and alerts in your area, you’ll appreciate it even more.

We always take a lot for granted in our lives. But catastrophic disasters you never expected–and were not prepared for–will always derail that train of complacency and normalcy bias the hard way for you. You won’t believe how lonely and frightening it will be when you don’t have a clue about what’s  immediately going on in the world around you when the S finally does HTF.