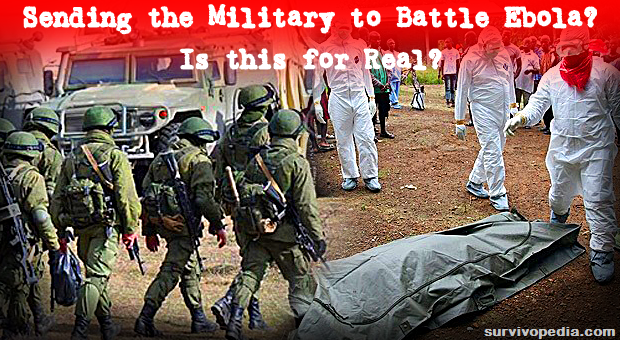 Sending The Military To Battle Ebola? Is This For Real?

President Obama recently announced his plans to send 3,000 military personnel to Liberia, Africa, for the purpose of combating the deadly Ebola pandemic which has now moved into five countries of western Africa. He called the Ebola outbreak, “the biggest threat facing us today.”

While I agree that the Ebola outbreak is a major threat to the whole world, I’m not so sure that’s it’s the biggest threat out there. ISIS seems to be a bigger threat, as well as one that has malicious intent. That gives ISIS a great advantage in choosing and attacking its enemies.

There are mixed reports coming out of Washington about exactly what these troops are supposed to do. One statement from the White House is that they will create a Command and Control Center to coordinate efforts in battling the virus.

I’m sure the various medical agencies will be glad to have a bunch of military troops around to tell them what to do. That sounds like a better job for the CDC than the military.

Other possible missions are to build hospitals and train indigenous medical personnel. Unless the hospitals and training are going to be rather rudimentary, which is possible, it’s going to take longer for the “help” to do any good than those people have.

Don’t get me wrong; I’m not against helping the people of Africa in their plight. The United States of American has long been known as a good global neighbor, always ready to help out in any crisis. This is no different; we should reach out a helping hand to those troubled nations. I’m just not too sure about the help that’s being offered.

It seems like I’m not the only one who’s confused about the help being offered. Military and State Department officials, called in to give testimony to the Congressional Oversight Committee are rather confused about what the military is going to do as well.

It seems that nobody is able to tell congress exactly what the plan is and how those troops will be utilized, let alone their level of training, materials to protect our troops and support for them.

They aren’t even able to tell Congress that they know what protective equipment will be supplied to the military. This last is rather hard to believe, as it’s common knowledge that the State Department has requested bids for 160,000 biological hazard suits.

What Would Be the Reason?

Amidst all this confusion, one has to wonder what the real reason for sending the military to Liberia is. It’s commonly known that Obama distains the military, like most liberal politicians. He certainly isn’t doing it to make them look good.

One theory that has been bandied about is that Obama secretly hopes that our troops in Liberia will become infected with Ebola and bring it back home. If you believe that his goal is the destruction of America, that’s a rather believable scenario.

While Obama couldn’t have planned for the Ebola outbreak, there’s nothing to say that he won’t take advantage of it to further his goals. If his goals are truly to destroy America, bringing an infectious disease with a high mortality rate to our shores could very well be the break he’s been looking for.

Contrary to what medical science is telling us, the State Department’s representative told the congressional committee that Ebola is not really all that dangerous. For one thing, it’s not as contagious as it could be, only being transmitted by bodily fluids.

Of course, any healthcare workers who are caring for Ebola patients has regular contact with their bodily fluids. That’s why over 100 of them have been infected in this outbreak.

Poorly trained personnel, functioning as healthcare workers, are much more likely to become infected, simply because they don’t have the experience necessary to make protective measures automatic. Even if they are trained, they will make mistakes, with many of them becoming infected.

This is a very risky move on the part of the Obama administration. While there is a need to do something to help the people of Liberia and the surrounding countries, the question must be raised, “at what price?”

Is the president literally writing off the lives of those servicemen and women, just to look good on the world stage? Is he opening a door for Ebola to jump across the Atlantic and attack us here at home? Or, is he being a visionary, seeing the risk for what it is and trying to stop the spread of the outbreak, before it can get any worse? Only time will tell.