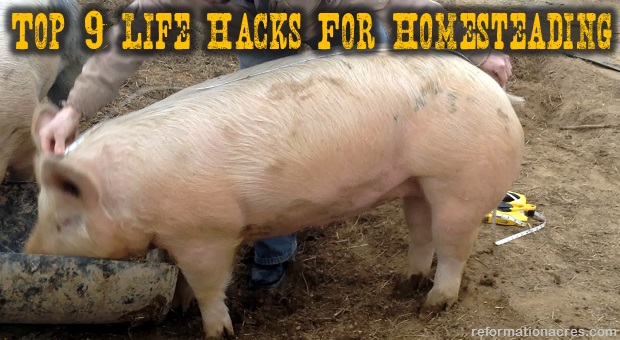 When you’re homesteading, any trick that will make your life easier is a good thing! We’ve found several different hacks that will help make things more efficient and, in the case of an emergency, will help make your life less difficult. Remember that the idea behind any life hack is simplicity. If it doesn’t hasten the process or make things more efficient, it’s not a hack! Here you go.

Make a Lantern from a Coke Can

There are actually two ways of doing this, depending upon how much light you want.

{adinserter usf}For the first method, just add olive oil or lantern oil to the can until it’s about a quarter of the way full. Add a long strip of T-shirt material or other cotton that’s long enough to reach from the hole in the can to the bottom of it.

Flip the top over the hole of the can and bring the cotton through that hole. Allow the cotton “wick” to draw the oil up through it and then light it. You have an instant oil lamp that will burn for hours and is refillable.

The second method here is to make a lantern that throws out a bit more light. Lay the soda can on its side and make 2 horizontal slits (horizontal if the can were standing up) about 2 inches above the top and bottom of the can. Next, make one vertical slit exactly between the two horizontal slits to make an “H”.

Pull the slits apart so that the can is open on the sides. Place a tea light or some oil with a wick inside the can and light it. You’ll see that the open design of the can disperses more light.

It’s never a good thing when Fido gets skunked, but it happens. Over and over sometimes! Now we have a way to help you get that funk out. Combine 1 quart of 3% hydrogen peroxide (available at any super store) with ¼ cup baking soda and bathe your dog in it.

You can also add a couple of drops of liquid dish soap and a couple more drops of lemon or lime essential oil. Combine these ingredients in a large bucket and add a gallon or 2 of water. Bathe your pet in this and the skunk smell will be gone, this time!

Make a Compass with a Needle, Leaf and Water

If you ever find yourself lost, here’s an easy way to get your bearings. Just take the needle from your Bug-out bag or first aid kit and rub the end of it on your clothes or on a magnet vigorously several times.

This magnetizes the needle. Next, place the needle on a leaf and place the leaf in a puddle or other body of water that will allow for easy reading. As soon as you let go of the leaf, it should float and pivot to a specific direction. That will be due north – now you at least have a direction in which to go.

Crayons are something that nearly everyone has lying around the house. If you find yourself without a flashlight or candle, just lit the end of a crayon in order to get hours of light. 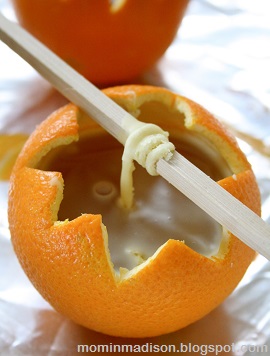 This hack is easy but you need to be careful to keep the orange peel in one piece.

Once you have your orange bowl, fill it about ¼ of the way with olive or vegetable oil and let it sit so that the membrane can “wick” the oil to the top. Light it and enjoy your “orange lamp”!

The worst part about winter, especially if you live in a particularly cold climate, is that it’s tough to get enough grow time during the summer. To get as early a start as possible, drape black plastic sheeting over each of your beds. The black absorbs the heat and warms up the ground beneath it. This shouldn’t take more than a few days.

Put Socks on your Toilet Seat

Sometimes it’s the little things that keep you going and this is one of them. Homesteading life isn’t the easiest and in the winter, it’s going to be even tougher if there’s no electricity. To make things just a bit nicer, cover your toilet seat (indoor or out!) with an old used sock on either side. It may look a bit funky but it’s going to be much more comfortable than sitting on a cold toilet seat!

How to Weight a Pig without a Scale

Weighing a pig is a pain in the behind and scales are expensive. Here’s an easy tip that’s nearly dead on. Start by measuring your pig from the base of his tail to between his ears, running the tape measure up his back. Then measure his girth right behind his front legs.

Life on a homestead isn’t easy, and it’s not going to get any easier if we lose power and our world becomes chaos. Knowing as many shortcuts as possible that actually work is going to save you time and money so learn as many as you can. We hope that these helped!

If you have any cool survival or homesteading hacks, tell us about them in the comments section below!