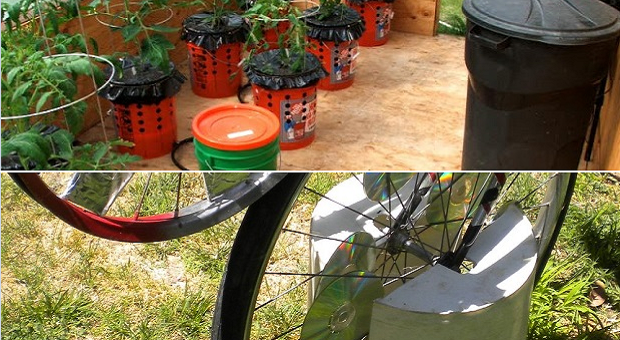 “If you have one bucket that holds 5 gallons and another one that holds 10 gallons, how many buckets do you have”?

That’s a line from one of my favorite movies, Idiocracy. It’s question used in an IQ test in a distant future where the smartest people had an average IQ of about 65. Idiocracy is a documentary that puts the cart before the horse a bit if you ask me, but I think the quote’s a nice intro to spice up an article about buckets.

Now, let’s see what 5 gallon buckets and survival have in common. The short answer is “basically everything”. You can’t build an entire city out of 5 gallon buckets or put a man on the moon but you can do a ton of other things with them.Let’s take a look at some practical uses for 5 gallon  plastic buckets, shall we?

Let’s begin with something interesting and pretty high tech: how to provide electricity for your home without needing 500 hamsters on wheels.

1. How to Build a Hydro-Generator

A hydro-generator is very close to a perpetuum mobile, meaning that it’ll provide you with cheap and abundant energy using almost nothing but a flow of running water and a few good plastic buckets.

To be honest, the design is much more complicated than playing with plastic buckets in the river, but if you’re a capable mechanic and know how to read a blue print, check the system that a guy named Sam Redfield has invented. 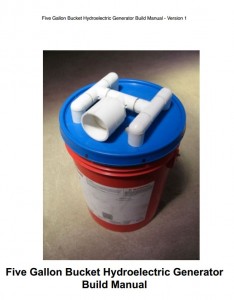 You’ll find the detailed DIY manual about how to build your own private energy source here.

You can use his open-source design for building your cheap hydro-generator that can be used on any kind of flowing stream of water, regardless of whether it’s a river, a small creek or even a sewage system. Any stream of water that flows quickly is good enough for this baby.

You can also take a look at the video below, and you’ll see a pretty accurate description of the pico-generator (pico means very small) built using Sam Redfield’s design and instruction manual.

The star of the show, the 5 gallon plastic bucket, is used for housing the generator itself, which is basically a modified alternator that was previously used in a road car. The rest of the project is built using readily available materials including batteries and PVC pipes.

These types of hydro-generators are used on a large scale in third world countries like Peru and Venezuela because they require next to nothing in terms of money and infrastructure (solar panels are pretty expensive). The best thing about hydro-power is that it works around the clock, unlike solar power or wind turbines which are “picky” to say the least.

2. How to Make a Mouse Trap

Rodents are going to be an issue if SHTF. After all, they have to eat, too. With shortages of food, that means that mice will be moving in to steal your food supplies. Since they carry an unending supply of nasty diseases, you need to keep the rodent population under control for your own welfare.

Fortunately, you you can easily catch that nasty rodent that’s been chewing through your sack of beans by building a mouse trap using 5 gallon buckets. With just one simple 5 gallon bucket you can start your own mouse catch and release program (old school stuff).

Forget those snappy traps (lots of gore in using those things!) or the fancy ultra-sound high tech devices, they’re history!

What you’ll need for your DIY project is a 5 gallon plastic bucket, a cordless drill (or wired, whichever you have), a coat hanger, a pair of pliers or wire cutters, a tin can, and some peanut butter as bait.

Using some brain magic and a bit of skill, you can transform these common household items into a fierce and highly efficient mouse trap! How? Check out the cool video below:

The basic principle behind this mouse trap is pretty straight forward: you’ll lure the mouse to fall into the bucket using a “wheel” made of a tin can smeared in peanut butter. Spoiler alert: The mouse loses in the battle with the human brain and it will be at your mercy in 30 seconds flat! The mouse lives to tell the story, everybody is happy and you get to finish the jar of peanut butter.

3. How to Build a Washing Machine

The human genius behind this DIY project found a way for washing his clothes after a  SHTF event using nothing but raw force and a 5 gallon bucket. Because prepping in style means wearing clean clothes even after a Carrington event, cleanliness is next to Godliness even in a world without electricity.

How can you wash your clothes without power, you may ask? Well, your ancestors did it just fine and they didn’t even benefit from the blessed 5 gallon bucket like yours truly.  Long story short, just take a look at the quick video and you’ll understand what’s what in a jiffy:

Using just a plastic bucket, a drill and a plunger (plus water and detergent, of course) you’ll be able to improvise a simple yet effective washing “machine”. The first washing machines were built using the same principle, only they were operated by steam engines.

4. How to Do a Hydroponic System

5 gallon buckets could help feed the whole wide world; I bet you did not know that! Why? Because of hydroponics, that’s why!

The interesting idea behind this concept is using 5 gallon plastic buckets as homemade hydroponic systems, aka home hydro.

DWC stands for deep water culture, also known as hydroponics, and can be improvised in 3 minutes flat with about a $20 price tag.

To build your DIY home hydro system you’ll need an air pump, a net cup, an air stone and, of course, the bucket. 5-gallon bucket. Plastic, that is.

How? Just watch this video:

There are no moving parts, it’s easy to do, straight forward and you can grow numerous types of plants in there. You can growbasically anything: tomatoes, lettuce, peppers, herbs, the only limit is your imagination (you can even grow tobacco in there).

Here’s another video describing a home-hydro job, very similar to the first, just to get the general idea

CLICK HERE to learn how to build a simple system to grow your food indoors.

5. How to Do a 5 Gallon Worm Composting System

Hopefully, you’ve already read our  previous articles about composting, recycling, the benefits of composting and the like. If not, cruise through the site after you finish this article and check them out because there’s some really good info there. Plus, it will give you a better understanding of what you should do even using the buckets.

Now we’re getting to the next level into the art of composting using our good ole’5-gallon bucket system: the answer to the challenges of “small composting” during harsh winters. Aka, how to compost indoors in small amounts using kitchen waste or similar organic materials. This is a great video:

Video first seen on Pat Man Do Too

6. How to Build a Mushroom Farm at Home 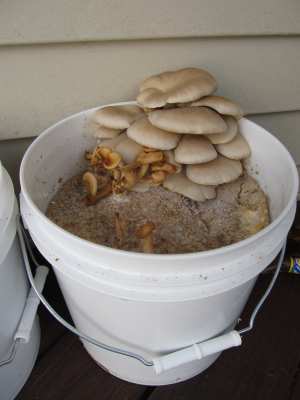 Mushrooms are the bringers of fun and joy, the soul of the party and they also make for excellent pizza all fungi recipes. Fungi means mushrooms in Italian. They’re rich in nutrients and many have medicinal properties as well, but that’s another article. Here’s how to grow them..

If you want to grow your own stash of “shrooms” indoors, the easiest way for achieving it is by – guess what – using a five gallon plastic bucket filled with coffee grounds (plus some additional Oyster Mushroom spawn).

Now, the plastic bucket requirement presents no significant challenges. The spent coffee grounds can be acquired by collecting your own used grounds or at your nearest coffee shop. Just ask nicely and you’ll get them for free, though you might not want to  them what it’s for!

The Oyster mushroom spawn can be bought from Amazon using TOR (or another IP spoofing tool). Just kidding, it’s legal to grow mushrooms at home folks! If you want the blueprint for the perfect mushroom farm, just go here and read our article about this.

Just a note: I bet you did not know that there are mushrooms that taste like bacon! Just a little bit of cool trivia that I enjoyed and wanted to share.

A British scientist’s latest discovery was recently announced on the BBC Science News Channel: a slotted 5 gallon bucket can be transformed into a very sturdy and reliable bike stand using nothing but a Jedi sword or a plasma cutter. Okay, maybe you can do the job with a sharp hand saw, but where’s the fun in that?

Seriously speaking, making a bike stand out of a plastic bucket is not very scientific or technical but it definitely works!

For this simple and fun DIY project you’ll need a carpenter’s tri square with a steel rule, a hand saw and a permanent marker.  The idea is to cut a vertical slot in the bucket that will harbor the bicycle’s wheel with ease so that the bike doesn’t fall down.

After you’ve measured the width of the bike’s tire, you must turn the bucket upside down and use the marker for drawing a center line.After that, you’ll mark the slot on either side of the respective line (the slot must be vertical to keep your bicycle balanced). The wheel slot will be cut with the handsaw through the bottom rim (all 4 corners) following the lines you’ve already drawn with the marker.

In the end, it will look something like this: 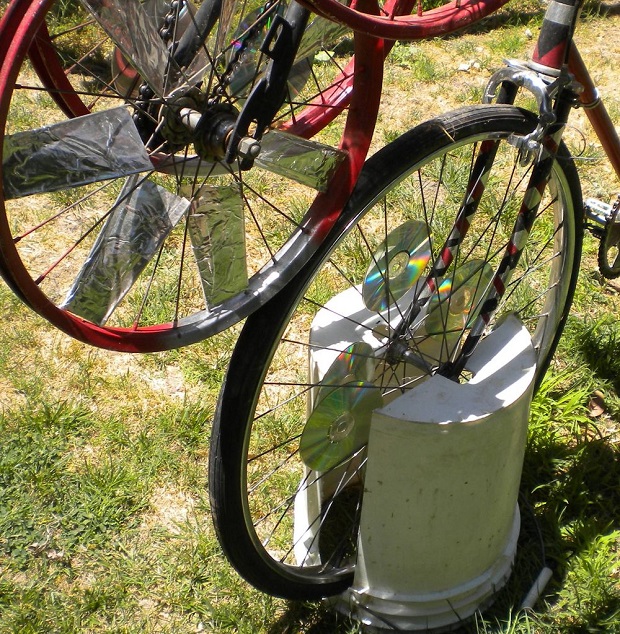 The difference between any type of self-watering planter system based on 5 gallon buckets, and this one is that the Alaska Grow Bucket System needs only 1 bucket, a plastic kitchen colander, and a fabric shopping bag.

Several 5 gallon buckets can be combined in a system and connected to a reservoir for automatic irrigation. A float valve regulator is used to maintain the optimal water level.

A 35 gallon reservoir needs to be refilled weekly or every other week, depending on the number of buckets you have in your system. The advantage of this system is the lack of electric pumps to circulate water and nutrients and to aerate the root zone. The lack of electric pumps means that the systems doesn’t need an energy source, and it’s good to go as long as it has a water source. You can find more information on hot the systems works here. 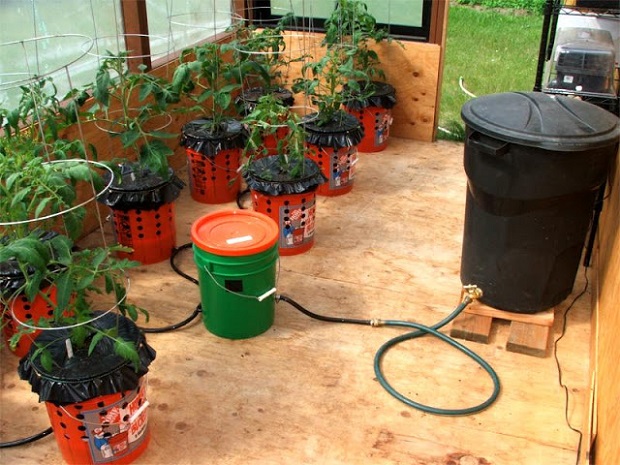 These are just a few uses of 5-gallon buckets that you may not have thought of. They’re also useful for the typical things; storing dry goods, using as stools, and using as water and waste buckets. You can get 5-gallon buckets for free from local restaurants, bars and donut shops if you just ask. They generally throw them away.

If you have any other good uses for 5-gallon buckets, please share them with us in the comments section below!