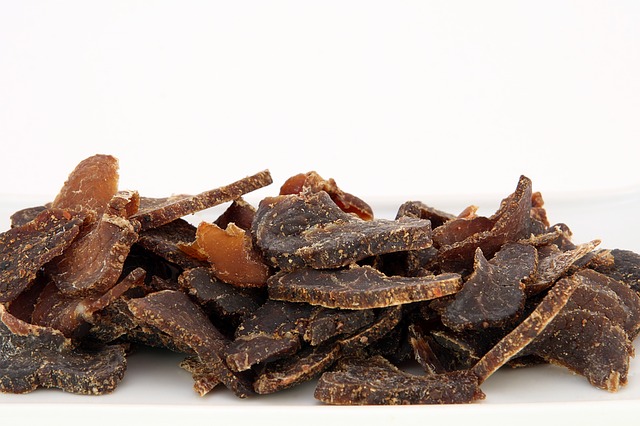 How To Rehydrate And Prepare Your Preserved Food

You’ve stockpiled your heart out and have a great variety of foods to get you through if there’s a short-term emergency or a real disaster scenario.

Now, the problem is figuring out how to actually use these foods. You have dehydrated, freeze-dried, canned and dried foods, but how do you make them edible?

Today we’re going to talk about how to use the preserved food in your stockpile.

What You Need to Know about Your Canned Food

Before we start talking about actually cooking, there are a couple of details that we should discuss.

First Rule: Check if Your Canned Food has Spoiled

There’s a wicked little bacteria out there called Clostridium botulinum. It’s a neurotoxin that causes cramps, nausea, vomiting, double vision, difficulty swallowing, breathing or speaking, weakness, and/or paralysis. Symptoms appear 12-72 hours after you consume it and it only takes the tiniest bit (umm, 2 BILLIONTHS of a gram) to make you horribly sick or even dead.

If this happens now, call 911 as soon as you suspect it. If you don’t have access to a hospital, you’re basically depending on luck and a good immune system. There are also some natural remedies that may help but even the standard treatment is an antitoxin that blocks circulation of the toxin in your bloodstream to keep it from getting worse.

If you’re lucky, you’ll feel better in a week to 10 days, but complete recovery can take three months to a year and most people afflicted with botulism never fully recover. Symptoms still present after a year will most likely be permanent. So, avoid it. It’s worse than the plague.

Botulism spores thrive in low-acid, low-oxygen, high moisture environments, which includes most canned vegetables and meats. If you look at your jar and see bubbles in it before you pick it up, be concerned. If the seal is bulging, leaking or there’s a decided release of pressure when you open the jar, pitch it. If it looks cloudy when it should be clear, pitch it. 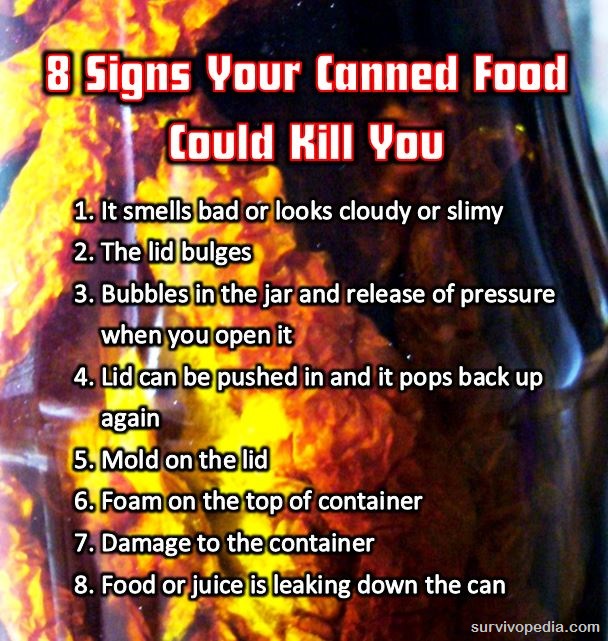 Check out my article here if you’d like to learn to safely can low-acid foods. Number one goal of survival is … survival. Don’t get botulism. Period.

The first and most important part of maintaining a good stockpile is to rotate your stock. When you’re choosing a product, make sure that it’s the oldest in the bunch. The easiest way to do this is to practice FIFO – First In, First Out. The first foods you buy are obviously the oldest, so they should be the first foods you use.

I use most of my stockpile as my regular pantry foods in order to make sure that my stockpile stays fresh, so this is easy. I just put the newest products in the back of the row when I’m putting away your food. That way, the oldest product will always be in the front.

This is super important because it would be a shame to lose the back half of your stockpile because it goes bad. Even if it’s still edible, most foods lose at least some of their nutritional value over time. This is a problem that’s too easy to solve – just practice FIFO!

Now, let’s talk about what to do with all of this food that you’ve invested so much time, effort, and money into stockpiling

How to Cook Rice

Whether you stockpiled instant rice or standard rice, it’s an extremely simple dish to prepare and you can eat it plain or flavor it with just about anything. It’s also a great source of carbohydrates.

Rice is, of course, a grain so it’s dry. The basic ratio of water to rice is easy to remember: it’s 1 part rice to 1 part water for instant or quick-cook rice, and 1 part rice to 2 parts water for raw rice. You may need a bit more water for whole grain or brown rices. The difference is in the preparation of instant or standard.

To cook instant rice, bring the water (and a pinch of salt) to a boil, then add the rice, remove from heat, and cover for several minutes while the rice rehydrates. For standard rice, rinse it first if you have enough available water. Then put the rice, salt and water over heat and cover with a lid. Boil for 10-15 minutes at a slow boil/simmer until it’s tender and the water is gone.

You can dehydrate just about any food and it’s a great way to preserve food long-term as long as you do it right and get all but about 10 percent of the moisture out. It doesn’t store as long as canned foods or grains but it’s lightweight and versatile.

To rehydrate food, you need to soak it in liquid. You can do that in one of three ways:

The great thing about dried foods is that you can combine them to make just about anything. For example, you can rehydrate dried onions with dried potatoes, then sauté them for some delicious hash browns. Toss in some dried herbs and the dish is even more delicious.

Soak your dried food in water for 20-30 minutes or until it’s soft. If you’ve chosen to rehydrate your food as you cook it, such as you would when making a spaghetti sauce with dried peppers, onions, and herbs, just toss them into the tomato juice and let it cook.

If you’d like, store some dried ingredients for dishes such as these together when you dry them, then seal them in a Mylar bag and label it. Then it’s ready to toss into your bug-out bag as a ready-mixed meal.

Here are two tips to help you best rehydrate food.

Check out my article on how to make jerky from beginning to end – it’s delicious!

How to Cook Beans

Beans are packed in protein and store forever. They also contain a mild toxin that causes gastrointestinal issues such as gas and bloating. Kidney beans contain a more extreme toxin and eating raw or undercooked kidney beans can make you extremely ill, and can even kill you.

By soaking beans and cooking them correctly, you can avoid this, and it also makes it easier for your body to digest them and absorb the nutrients from them. Fortunately, the process is easy but beans aren’t something you’re going to be able to cook quickly unless you’ve already pre-cooked them and canned them.

Start by washing your beans after picking out any rocks or debris that may be in them. Cover them with water and a cloth and let them soak overnight. When you’re ready to cook them, put them in an appropriately-sized pot. Beans will double in size by the time they’re ready to eat.

Add about twice as much water as beans, then add salt and pepper. Toss in a ham hock or some ham chunks or bacon if you’d like – it makes them delicious! Cook the beans for 2-4 hours or until they’re tender, adding water as necessary. I generally put a lid on them but tilt it so that the steam can escape just to keep the stove clean.

One forgotten trick for cooking beans properly (especially kidney beans and white beans) is to change the water three times during preparation. Cook the beans in a pot with water and let them boil for 10 minutes. Use a colander to drain the beans, put them back in the pot, add water and cook again for 10 minutes before repeating the operation. After changing the water three times, you may add vegetables or bacon and season on your own choice, while boiling the beans for 1-2 hours. 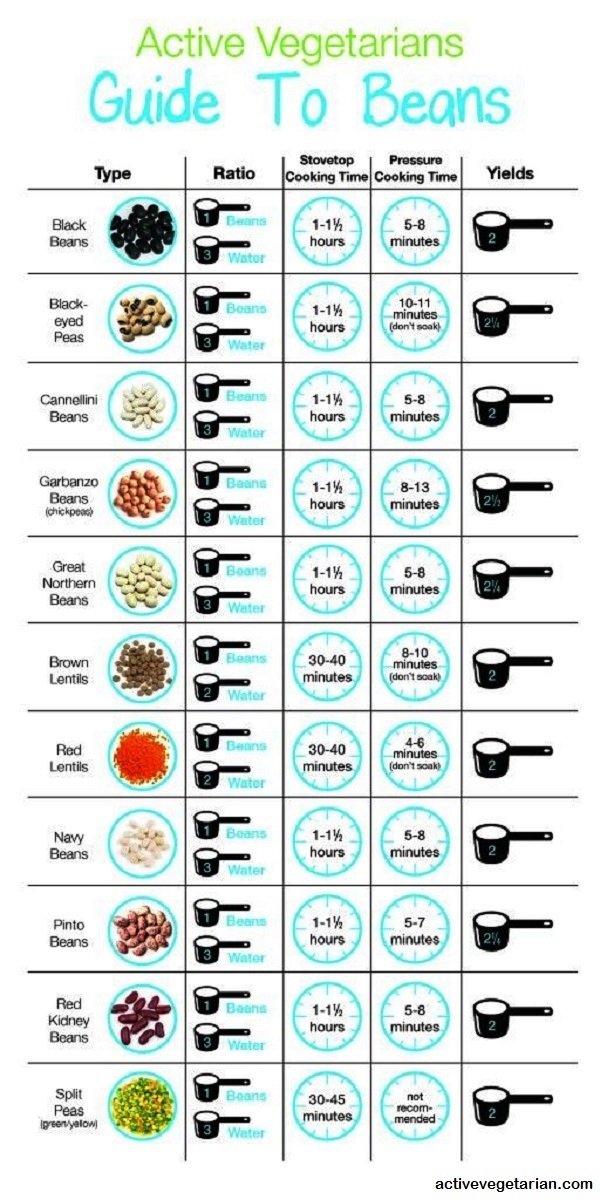 As long as you have power, you may also have stored food by freezing it. It’s a great method as long as you’ve stored it well and you use it before it goes bad. How long food stores frozen depends upon how well you wrapped it before you froze it. Vacuum sealing is definitely the best way but plastic freezer bags work, too.

Most foods will stay good for up to a year or longer if it’s vacuum packed, though vegetables tend to freezer burn faster. Also, foods keep longer in larger chunks.

To properly defrost food, it should be done in the refrigerator, in cold water, or in the microwave.

To use the fridge, move the food from the freezer to the fridge several hours to a day before you want to use it. A good rule of thumb for larger items such as turkeys is that it requires 24 hours in the fridge to defrost for every 5 lbs. of meat. Use within 24 hours.

To use cold water to thaw it faster, submerge the plastic-covered food in cold tap water and change the water every 30 minutes. You want to make sure that whatever you’re defrosting is sealed. If it isn’t, bacteria from the air can get into the meat, or water could damage the flavor and texture of it. Cook within 24 hours of defrosting. If you’re not cooking it immediately, refrigerate it immediately.

To use a microwave to defrost food, cook as directed on your microwave. Because this method can bring the meat to the temperature that allows for bacterial growth but doesn’t kill it, you need to cook food immediately after you defrost it in the microwave. Before refreezing food defrosted in a microwave, cook it first.

Now that you have some basic ideas about how to make delicious foods with items that you’ve stockpiled in an altered form, get cooking! It’s always best to know how to use these methods BEFORE you actually need to know. Practice makes perfect! If you have anything to add, please feel free to do so in the comments section below.