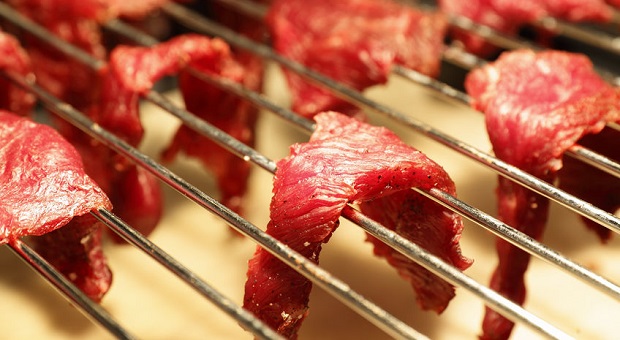 Back To Basics: How To Make Jerky For Survival

Jerky can be made from just about any type of lean meat that you can think of. It’s a great food for a survival situation because it’s lightweight, nutritious and energy-dense. It’s also easy to make; the Native Americans and many other civilizations were making it long before food dehydrators and commercial packaging were in existence.

I make this all the time, or at least I did when I still had kids in the house. The only problem that I ever had was that even if I made 3 or 4 pounds of it (which is a LOT of jerky) there still wouldn’t be any left by the time I got home from work every day. I got pretty good at taking out my own stash before I even let the herd of teenaged boys in the house know that it was done!

Back to the topic though. There are basically two ways to flavor your jerky. You can use a wet marinade or a dry rub. If you’re using a marinade, you need to let the meat soak in it for at least 24 hours if you want it to absorb enough flavor.

A good recipe for teriyaki-style jerky is to use equal parts of Worcestershire sauce and soy sauce, then add in some garlic powder, salt, black pepper and, if you’re like me and like it a bit spicy, a bit of cayenne powder and some crushed red pepper flakes. Make enough marinade to cover the meat and stir it several times so that the meat in the middle gets marinated too.

If you’re using a dry rub, just add it to the meat an hour or so before you start the dehydration process. The recipe for this one is all on you. There are a kazillion Cajun, Mediterranean, Italian and American rub recipes out there that you can pick and choose from.

The first step to making your own jerky is choosing the right meat. You need for it to be lean and as free of tendons as possible. I like to use a rump roast. Yes, it’s expensive but it makes good jerky. Venison jerky made from rump roast is amazingly delicious and much better for you than beef because it has a much lower fat content.

Low fat content is a good thing not only from a health perspective but also from a preservation perspective. The leaner your meat is, the longer it will take for it to go rancid.

Now that you have your meat, you need to slice it. Your butcher may do this for you but I prefer to do it myself. Unlike when you’re cutting steaks, you’re going to cut the meat WITH the grain. Figure out which way the grain goes on the roast and that’s the direction that you’re going to cut. Next, you’re going to need an EXTREMELY sharp knife. I use my butcher knife.

I’ve found that it’s easier to cut the meat if it’s extremely cold or even partially frozen. Don’t try to cut it if it’s completely frozen unless you want to lose a finger. Also, if you have to force the knife through the meat, it’s going to be hard to get the proper thickness.

You want each slice to be as close to exactly the same thickness throughout as possible. Shoot to make each slice no thicker than a quarter inch thick. This will give you plenty to chew on without worrying about moisture still being locked in the center of the slice to make your meat go rancid faster than anticipated.

Once you have the meat cut, prepare it as I explained above either using your marinade or your rub.

If you’re using a food dehydrator, this is the easy part. Just put the meat on the trays in a single layer and turn the machine on. I’ve found that the bottom layers dry faster so I prefer to switch the layers around a bit and as some of the pieces are done, I consolidate the slices onto fewer trays until it’s all finished.

If you’re using the oven , you’re going to need to do smaller batches because you’ll be using a cookie sheet and you won’t be able to fit as much on it as you can a dehydrator. Place the meat on the tray in a single layer. An alternative that I’ve seen to using a cookie sheet in the oven is to hang the slices from the racks by using a toothpick inserted through one end of the meat and hooking it between the slats of the rack. Personally, this seems like it would be really messy.

Either way, set your oven to 150 degrees and cook for about 2 hours. Check it and, if you’re using a cookie sheet, flip the meat over. Cook for another two hours or until meat is done.

You’ll know that your meat is done when you can bend it and no moisture beads out of the crack. Again, if you want it a bit moister to make it less leathery, stop at this point. If you want to completely dry it out, cook it until it cracks when you bend it sort of like stiff leather would. It’s not as tasty but it will last longer.

Once your jerky is done, (assuming you have any left after the family figures out that it’s finished) you can either choose to eat it now or preserve it. You can preserve it by vacuum sealing it into bags or by dry canning it.

If you’re in a SHTF situation and don’t have access to an oven or dehydrator, follow all instructions up to the point of cooking. Then string it onto a piece of wire and hang it over a fire to dry. Remember to keep it high enough that it’s only getting low heat. You want to dry it out, not cook and burn it.

Now that you know how to make jerky, go give it a shot then come back and share your results with us. If you’re an old pro at making jerky at home, share some of your tips with us!