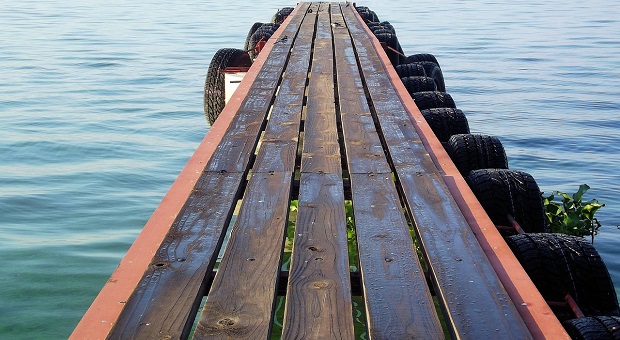 How To Recycle Tires For Your Homestead

Tires are almost ubiquitous in our daily lives, as they look pretty much the same regardless of the type or make of your vehicle and they’re basically everywhere. Just imagine, there are hundreds of millions of tires built in the US alone, year after year. A tire’s life span is anywhere between 2 years and 5 years; after that they’re as good as dead.

Today’s article will present you with a few ideas about how to recycle old tires for your homestead.

So, talking about your homestead, how about building it using old tires? It’s perfectly doable. Just think of old tires as building blocks, or bricks if you will. Well, take a look at these pictures. These guys built an entire home using nothing but old tires. 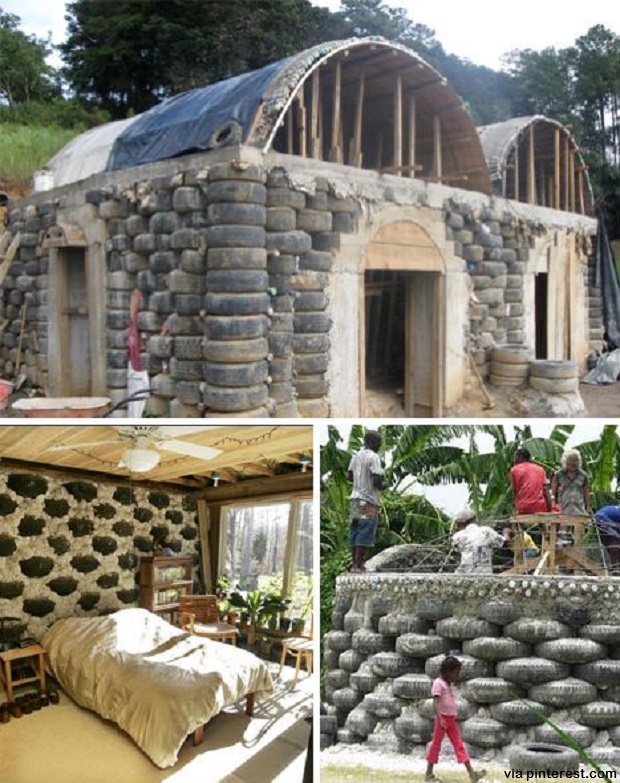 The best thing about building with tires is that they’re essentially free of charge and they’re excellent in terms of insulation, not to mention that recycling tires is good for the environment. Here’s a short YouTube video depicting the whole process in detail. Basically, you’re building walls out of tires and you fill the gaps (the holes) with earth. It’s that easy and extremely efficient, not to mention it’s dirt cheap (yeah, I know – bad pun). All that’s required is a bit of elbow grease and a bit of skill.

Another great idea for recycling old tires is to use them for building steps to your elevated residence. Take a look at these pictures and you’ll understand what I’m talking about. All that’s required is a bunch of old tires filled with earth and arranged in a symmetrical, step-like pattern and that’s about it. Awesome idea, don’t you think? Another interesting idea is to use tires for creating tire stepping stones in your garden, in mushy areas and things like that, as you can see below. 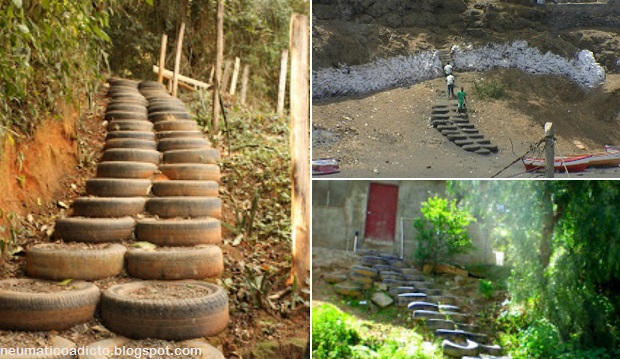 Now, let’s put our thinking caps on for a second and contemplate the following: what are tires made from? Yes, you guessed it right: rubber. Well, it’s a special type of rubber, augmented with synthetic stuff to give it strength and endurance, but it’s basically rubber, and rubber is water-proof, right? Hence, you can build a roof top using shredded tires. Pure genius, don’t you think? Take a look below and be amazed at what can be achieved with plain old tires, some work and loads of imagination, patience and skill. 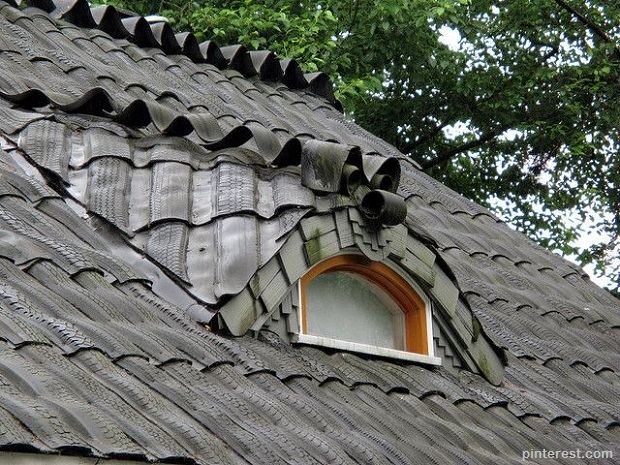 If you’re a proud homeowner and you have a basement, what’s the worst thing that ever happened to you when you were paying a visit downstairs and the stairs were wet? Well, I don’t even want to think about it. How about re-using old tires for no-slip stairs? Yes, I know, it’s pure genius. 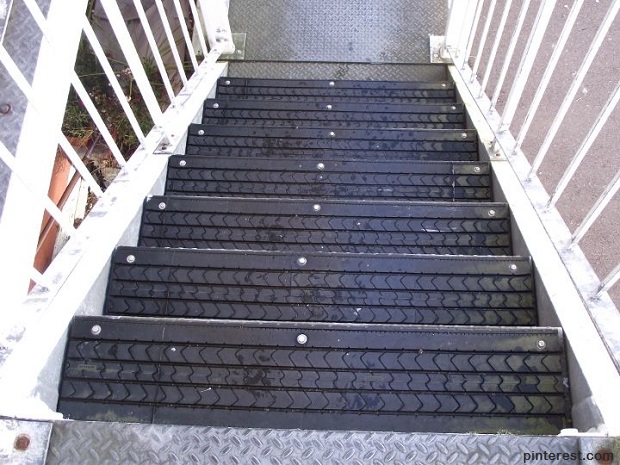 This is an excellent idea for basement stairs or any type of stairs for that matter. You can even pave the floors with that stuff, or the sidewalk if you have a business and you want to avoid getting sued by obnoxious people. The world is your oyster so use your imagination!

Put old tires and a bunch of kids into the mix and watch it grow into loads of fun. How, you ask? What am I talking about?  Well, just pin a bunch of tires on a wooden wall, as per the picture below, and watch your kids evolve into monkeys. Obviously, you can extrapolate from here and pin old tires onto trees and the like, but you get the general idea. 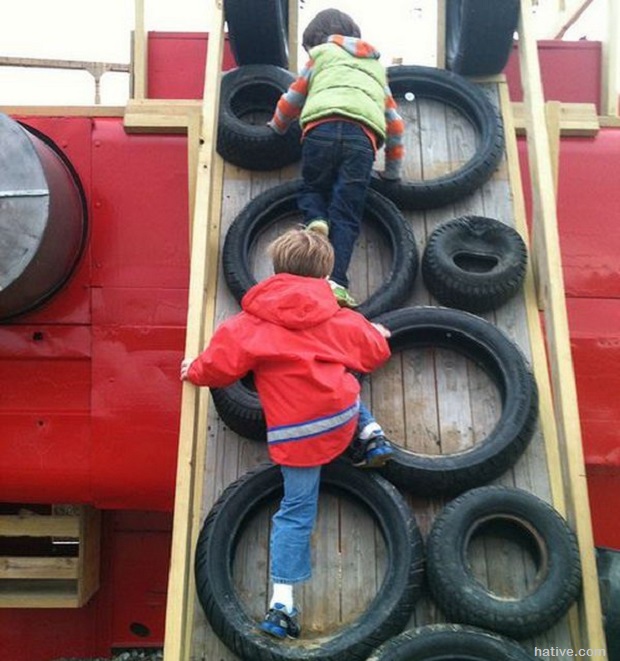 Also, you can paint them in bright, shiny colors when they’re no longer useful on your car and make outdoor planters out of them, or a tree swing for your kids. Even a tire ottoman can be built from reused tires covered with some sort of fabric. Still, climbing beats all – just ask your kids. 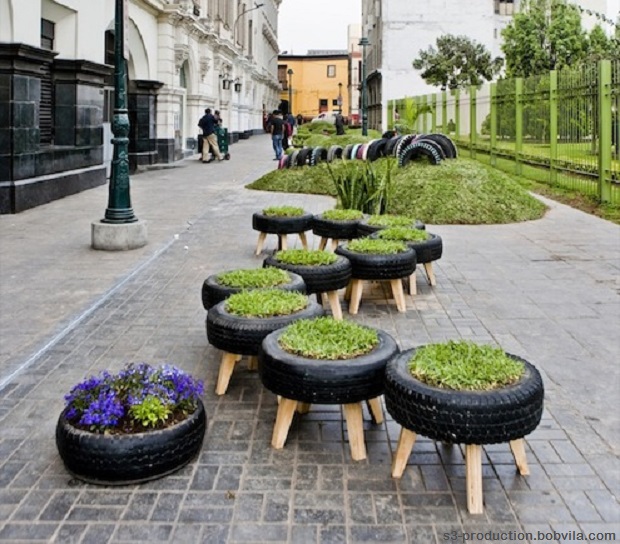 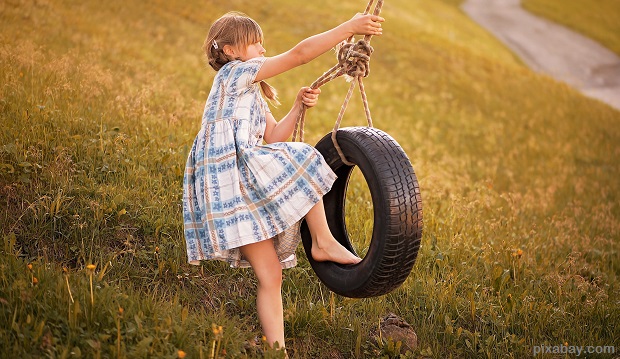 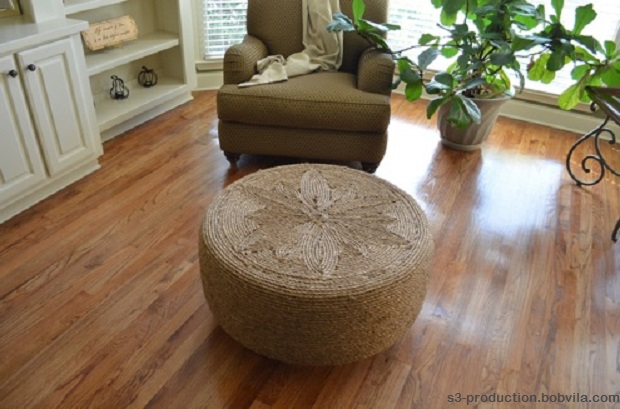 Another interesting and useful structure that can be built from old tires is for bike storage. A simple, clever and efficient idea: all you have to do is half-bury a bunch of tires and there goes your bicycle rack. 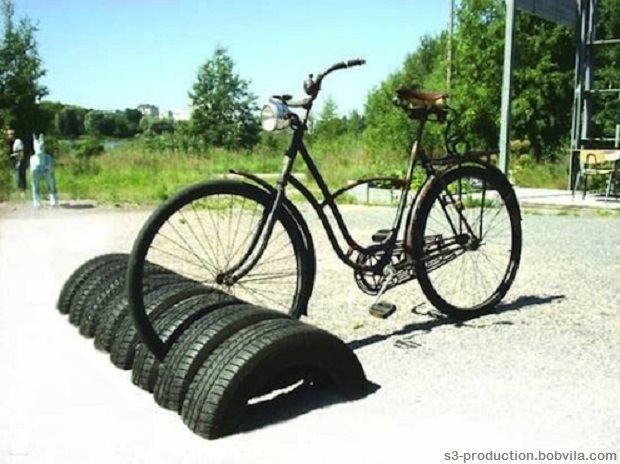 Speaking of half-tires, you can build a seesaw for your kids with that and a plank of wood. The cost? Next to zero. The amount of fun created? Priceless! 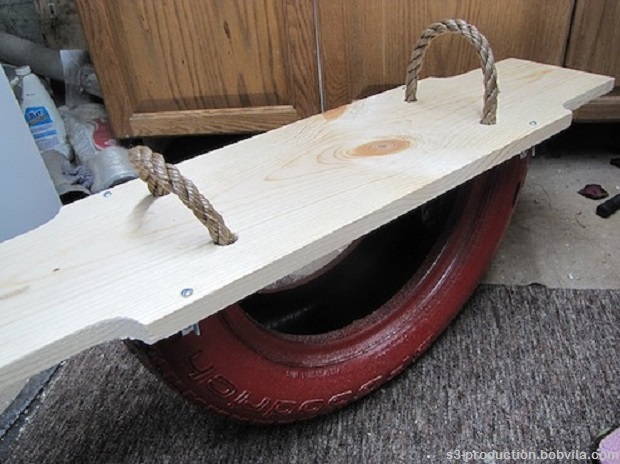 Getting back to a previous idea, building a tire planter is a pretty old concept, but how about mounting the respective planters on the wall? Imagine how awesome the plants cascading on the walls look like! Or you can stack/stagger the planters in your garden, creating a large and complicated scheme that looks awesome…the possibilities are endless. God created tires for more than just moving your car! 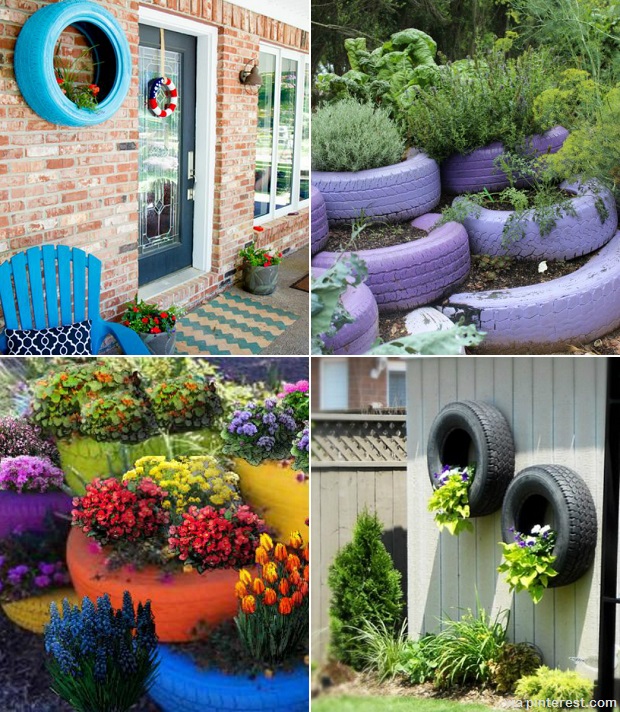 If you thought that I was out of ideas, how about this one: build yourself a small backyard pool or pond using a “giant” tire! Basically, you’ll have to dig a hole in the ground big enough to accommodate the giant tire, cover it in a sheet of plastic for retaining the water inside  and decorate it with rocks and stuff like that to give it a “natural” appearance if you’d like. The end result looks pretty awesome, don’t you think? The picture doesn’t do it justice. 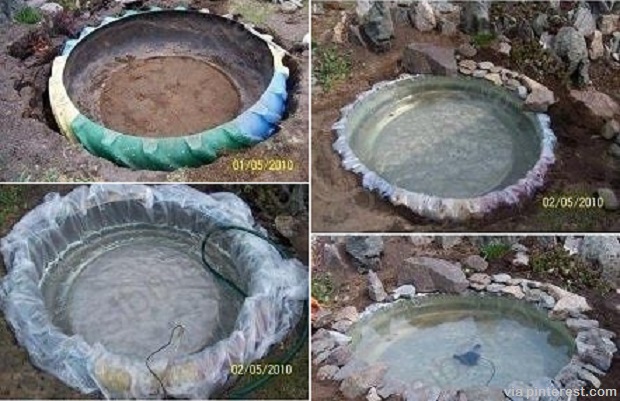 How about a variant of this idea? Build yourself a redneck pond using old tires buried into the ground. It’s basically the same thing, with a twist: here’s the YouTube video depicting the details. Enjoy!

If you have the skills and the tools, you can build yourself some really cool and useful pieces of furniture using old tires. You can create pretty comfy outdoor or indoor chairs from recycled tires for example. Paint them in vivid colors, sit back and relax. Here’s a pic depicting what I’ve just said but I think you have to be pretty skilled to do this. 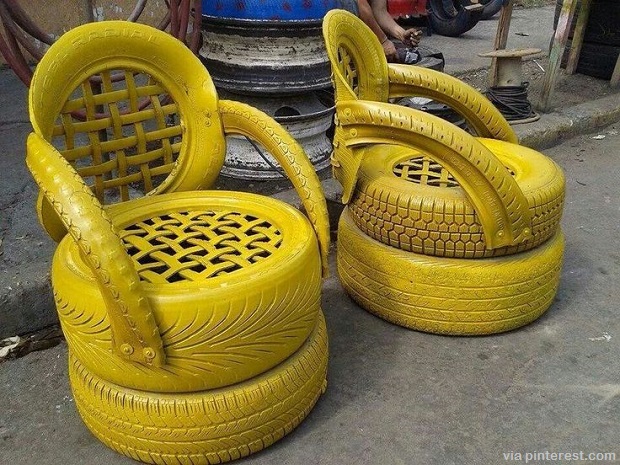 Here’s a video where you can admire armchairs made from used tires; these are like the next level in old tire engineering.

Now, let’s take a look at a refreshing idea which reminded me of an old commercial that depicted tires and human feet. Enter sandals made from recycled tires. I know that’s not necessarily your cup of tea, especially if you’re living in a first world country. You can afford as many as you want from your local Wal-Mart, but how about making your own from old tires? It’s a good idea after all and would be great in a survival situation.  It may save your life someday; who knows? 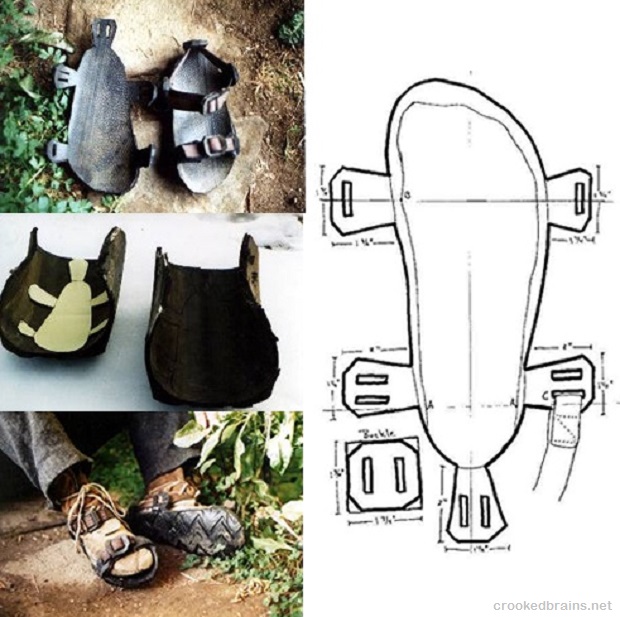 While we’re at it, I mean in the realms of tire-fashion, let’s take a look at how to DIY recycled tire hand bags and some pieces of furniture. There are people with the improbable name of Eco Designers who build useful stuff like hand bags for the eco-conscious ladies and also various pieces of furniture (chairs and even rugs).

Just take a look at the pics and stand in awe at the human ingenuity! Keep in mind that these gizmos are relatively complicated to DIY and these guys are asking $40 for a bag and over $100 for a chair. However, this is a cool idea and if you don’t have idle hands, who knows, maybe you can even start your own business. 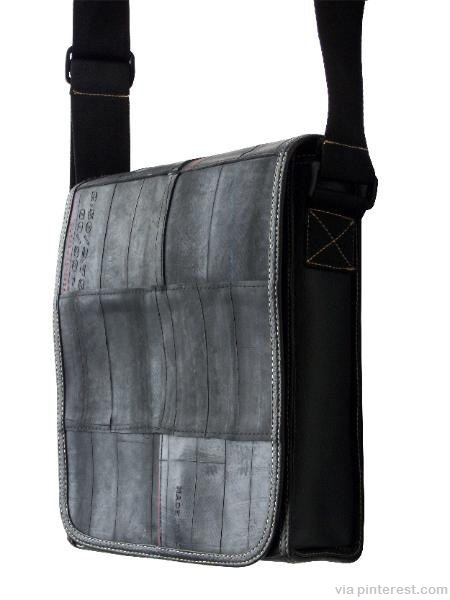 If you have questions, comments or additional ideas about how to use recycled tires for your homestead, feel free to join in in the comments section below.