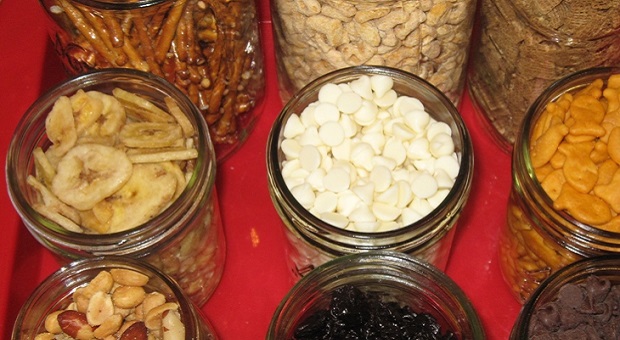 There are a lot of options available when it comes to long-term food storage. Choices range from heavier, bulkier wet foods such as regular canned goods and MREs (Meal Ready to Eat) to dry foods such as dehydrated grains or pasta and freeze-dried meals, and there are some distinct advantages and disadvantages to each method of storage. In this article we’ll be reviewing some of the key differences between dehydrated foods and freeze-dried, or astronaut, foods.

First and foremost, dehydrated and freeze-dried foods have several things in common. Both these types of foods are known as dry foods, meaning they contain very little to almost no water content. In fact, dehydrated and freeze-dried foods both require additional water to be properly reconstituted, which is an important factor to consider if you live in an arid or desert-like area.

Both these types of emergency rations are very light-weight, as well, so you can carry a lot more food in the form of dehydrated or freeze-dried rations than in canned goods or MREs.

With comparable shelf-lives of 20 – 25 years or more, you can also store substantially more dehydrated or freeze-dried food in a smaller location, such as under your bed or in a closet. Canned foods and MREs, by comparison, are heavy and bulky as well as having short shelf-lives of only 3 – 5 years or so.

Dehydrated and freeze-dried foods do have some differences, though: 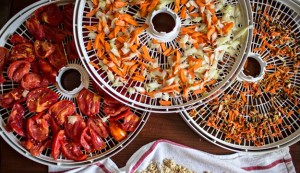 Dollar for dollar, you will generally be able to purchase more dehydrated food than you can freeze-dried food, simply because the freeze-drying process is more expensive than the regular dehydration process. So if you’re on a tight budget, or you want to set aside a substantial amount of emergency food for yourself and your family, stocking up on dehydrated food is an economical option to consider.

When foods are dehydrated, they typically lose 90% – 94% of their moisture content; it’s this lack of moisture that enables dehydrated foods to be stored for such long periods of time, often upwards of 20 – 30 years. Unfortunately, dehydration causes certain nutrients to break down, since it basically amounts to a slow cooking process as hot air is circulated over the food to sweat the water out of the fruits, vegetables or other dehydrated material.

Dehydrated foods, as a result, take on a shriveled and leathery appearance, and things like fruit are extremely tough and chewy if you don’t rehydrate them. A huge advantage of dehydrated foods, however, is that you can dehydrate your own fruits and vegetables if you have the extra produce.

This is an especially useful skill in the event of a major disaster or catastrophe where there may be shortages or interruptions of the food supply, or if you simply have a large garden that produces an abundant harvest each year and you want to save the excess.

Another aspect of dehydrated foods is that usually they are comprised of raw materials for cooking with. So you may have rice, pasta, potatoes, onions, corn and other staples, but you have each of these things individually packaged or in separate cans, and it’s up to you to combine the ingredients with water and cook something of them. Most dehydrated foods also lack seasoning, spices or herbs, so it’s up to you to add seasoning or spices to whatever you end up cooking.

In terms of prep time, dehydrated foods also take longer to cook (generally between 20 – 60 minutes or longer depending on the dish) than freeze-dried foods. Dehydrated foods typically require a larger quantity of water to be properly reconstituted, as well.

Because the process of freeze-drying allows the water to be immediately extracted from the fruits, vegetables or other food, freeze-dried foods are quite nutritious, more so than their dehydrated counterparts.

Typically able to be reconstituted with hot water in just 5 – 15 minutes, freeze-dried foods are available in several forms. Many companies sell individual freeze-dried foods, such as raspberries, blueberries, cherries, TVP (meat substitute), beef, peas, corn and a myriad of others, in #10 cans and air-tight Mylar bags.

There are a huge variety of freeze-dried meals available from various companies; Mountain House, Wise Company, eFoods, and Harmony House are just some of them. Offerings from these companies range from granola with raisins and milk, creamy pasta and vegetable rotini, beef stroganoff and teriyaki with rice to beef stew, chicken pasta and lasagna with meat. All of these meals are freeze-dried and come with 20 – 25 year shelf-lives.

On the downside, freeze-dried foods are not always the most calorie-packed, especially if you were to eat as little as 2 – 3 servings a day. Two servings of your average freeze-dried entrée, such as those listed above, will usually come out to about 500 – 800 calories. This might be enough to subsist for a short period of time, but realistically most people need far more calories on a daily basis, so you’ll either have to eat more or supplement your diet with other foods.

Ultimately, when it comes to long-term food storage it really seems that diversity is the key. If you want the lightest-weight emergency rations for hiking or in case of a helter-skelter GTFO of dodge dash for your designated bug out location, then freeze-dried foods are a great option. Dehydrated foods are also good for emergency bugging out, when weight is an important issue, and if you have a larger group or family that you need to feed, dehydrated may be best.

But if you’re stocking a pantry at a designated bug out location, or you just want to fill out your own home food storage as a hedge against emergencies or uncertainty in the food chain, a variety of different foods are best.

Traditionally canned foods, such as those you can buy in the grocery store, are usually marked with a shelf-life of 3 – 5 years or longer. A tin of peaches, a can of pineapple or even a can of baked beans can go a long way toward lifting your spirits if you’ve got to live primarily off emergency rations and other stored food for a while.

Alongside the canned foods in your storage, you can stash away extra supplies in the form of dehydrated foods like pasta, beans, bread mix or flour, rice, pancake mix and so on. Then, if your budget allows, you can invest in freeze-dried foods, ranging from individual cans of freeze-dried fruits and vegetables to complete entrees and desserts like beef stroganoff, chicken noodle soup, cheesy chicken and rice, chili ‘n cheese, and many others.