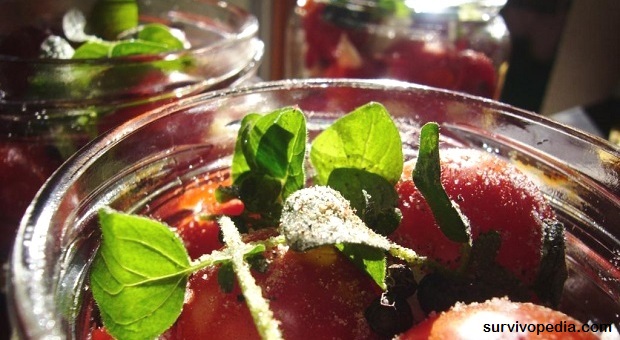 One of the first things many people think of when they hear the word ‘garden’ is fresh tomatoes. They come in all shapes and sizes, from the aptly-named cherry tomato that is great in a salad or to just pop in your mouth, to the giant heirloom steakhouse tomatoes.

But now that you’ve got a garden full of them, what do you do to preserve them? You have many options!

First, it’s important to know what you’re going to use the tomato for. There are so many varieties that it’s impossible to say, “This is how you should prepare any tomato”, so we’re going to talk about options, and you can decide which ones are right for your crop.

Before we talk about preserving them, you need to know that tomatoes will continue to ripen even after they’ve been picked. You can actually pick them when they’re nearly green, set them in the windowsill, and they’ll ripen on their own. That’s important to know, so that you understand that you have a limited window to prepare them for storage.

This is, of course, the most common way of storing tomatoes that you’re going to eat within a week or so.

I always clean mine and pop the stems off if possible before I put them in the fridge, but that’s just to save a little time later. To keep them the longest this way, put them in the crisper drawer.

Most people don’t think about freezing tomatoes, but it’s a good way to go as long as you have the freezer space. If course, they aren’t going to be the same as a fresh tomato, but frozen tomatoes are great in sauces and soups.

You can blanch them, peel them, then freeze them, or just freeze them whole with the skins on. You can also puree them first, or even just chop them into chunks. If you’re going to use that method, peel them first.

This is my preferred method because if something happens and you don’t get to them in time, the skin helps protect them from freezer burn. The downsides here are that they take up so much space, and if the power goes out, you have to use them immediately.

I’ve found that canning tomatoes is my preferred method. Since tomatoes are acidic, you may safely can them using the water bath method. If you have smaller tomatoes, you could can them whole, or if you’d rather, you could quarter, chop, dice, or puree them first. Again, it all depends on what you want to use them for.

When canning tomatoes, you don’t just have to can plain, whole or quartered tomatoes. You can mix in some cilantro, onions, or other goodies to make salsa or chutney. They’re also great juiced, pureed or cooked down into tomato sauce or paste.

Don’t forget about spaghetti sauce, either! You can even throw in some meatballs if you’d like, though I personally find canned meatballs a little weird. 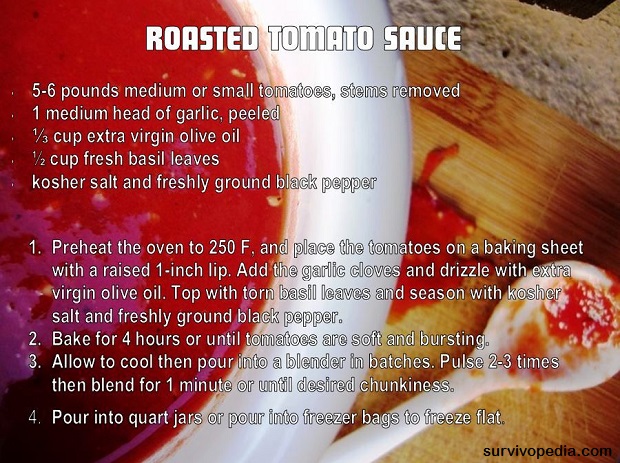 You should skin your tomatoes before you can them but that’s not as hard as it sounds. Just bring a pot of water to boil, then dip the tomato in for a few seconds, transfer it to a bowl of ice water, and the skin will slide right off.

Though most people refer to any type of dried tomato as a sun-dried tomato, you can also use your oven or dehydrator. Most people don’t live in a climate that’s dry enough and warm enough to actually dry them completely in the sun. Regardless of which method you use, preparation for preserving your tomatoes in this manner is the same.

Wash the tomatoes then remove the stem, core, and any bruised or bad spots. If you want, you can scald them to remove the skins. That’s completely optional. Cut them in half, or quarter them if they’re longer or wider than 2 inches.

If you’d like, gently squeeze the seeds out without losing the pulp. You can scrape them out if you’d rather. Sprinkle them with salt and any other seasoning you’d like to add. Remember that you’re drying them, so a little salt goes a long way.

Some people prefer to soak the tomato slices in vinegar for a few minutes before dehydrating in order to kill germs. I don’t, but feel free to do so if you want.

Drying them in the sun requires hot days with little humidity, and will take about 3-4 days. Make a box with nylon netting on the bottom. Lay your tomato pieces on the netting with the cut side down. Cover with cheesecloth or some other breathable material to keep the bugs out.

After a day and a half or so, flip the tomatoes over so that the cut side is up. If you live in a place that has heavy dew at night, or if it’s going to rain, bring the tomatoes into a dry place at night or until it quits raining. 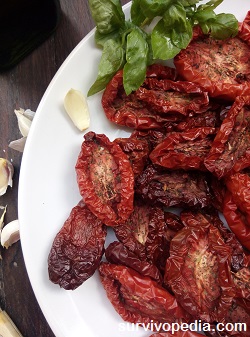 Drying tomatoes in the oven is easy. Place the tomatoes cut side up on a baking sheet and set your oven to 175-200 degrees F.

Put your tomatoes in the oven, leaving the oven cracked a little.

After about an hour and a half, turn them over and gently squish them flat with a spatula.

Leave them in the oven for another hour and a half or so, then check to see if they’re leathery to the point that they aren’t sticky, but aren’t so dried that they get tough.

At this point, you have a couple of options. If you’d like, you may can them in oil and seasonings. If that’s your plan, you don’t have to be quite as careful of the moisture content. If you’re going to completely dry them, leave them in the oven until they’re about as leathery as a dried apricot. If you don’t dry them long enough, they’ll mold.

Drying your tomatoes in a dehydrator is basically the same process except it will take several more hours. When I dry mine in the dehydrator, I like to flip them every couple of hours to ensure even drying.

Just like with any other dried food, the shelf-life isn’t as long as if you can them, but you can dry-can them, freeze them or vacuum seal them to extend shelf life.

Tomato powder is absolutely delicious and stores fabulously so this is a great way to preserve tomatoes. Just add a couple of tablespoons to whatever you’re making (adjust the amount according to taste).

You have a couple of options; you can either make them from whole, dehydrated tomatoes, or you can dehydrate the skins that you’ve removed while canning and make the powder from them.

When I’m making tomato powder, I prefer to dry my tomatoes (or peels) until they’re nearly completely dry instead of just leathery, but either way will work. After you dry them, freeze the dehydrated tomatoes for a day, then remove them and put them in your blender or food processor and pulse until you have a powder.

Since the tomato powder tends to clump, you may want to add a teaspoon of arrowroot powder or corn starch per every few cups of dried tomatoes.

I recommend dry canning or vacuum sealing the tomato powder if you’re not going to use it quickly. 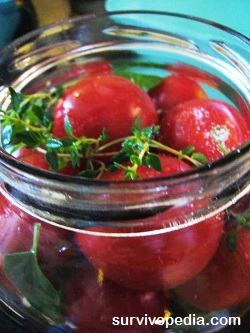 This isn’t a method that you’ll often see used for tomatoes but I think they’re delicious, and it’s crazy simple.

They’re delicious in salads or to chop up for salsa or chutney. I recommend using pint jars, and cherry tomatoes are the tomatoes of choice for this.

First, clean your tomatoes and remove the stem and leaves. Run each tomato through with a skewer so that the pickling can penetrate them.

Stuff the tomatoes into pint jars and add a sprinkling of fresh herbs (dried will work, too) of your choice in on top. I prefer basil and oregano. Feel free to add onions, a few cloves of garlic, or any other spice or vegetable that you like.

Though I prefer to keep it more Mediterranean flavored with the ripe tomatoes, pickled green tomatoes taste wonderful and make great gifts. Here are a few ideas for pickling spices for green tomatoes.

Combine these spices and divide them among the jars evenly, either before or after you add the tomatoes.

Next, combine the following ingredients in a pan and bring to a boil. Note that this is enough for about 3-4 pints so double or halve as necessary:

Pour the pickling juice over the tomatoes, leaving a half-inch or so of headspace after you’ve gotten all the bubbles out – use a small spatula or spoon to do that. Add rings and properly prepared seals, then process in a water bath for 15 min. Store in a cool place.

Now you know of six different ways that you can preserve tomatoes! If you have any ideas or comments, please feel free to share them in the comments section below.