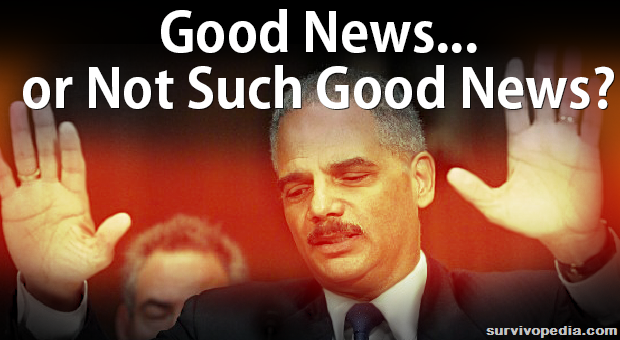 Good News… Or Not Such Good News?

I don’t know if you heard, but Attorney General Eric Holder announced this last week that he’s going to resign. Considering Holder’s record of wrongs against the American people, I’m sure that there are lots of people out there saying “It’s about time!”

Getting rid of an Attorney General who thinks that his job is to push racism and racial favoritism as much as possible seems like a good idea… at least on the surface.

Interestingly enough, his announcement came right on the heels of a federal judge turning down his petition to delay release of some Fast and Furious documents. That might make it look as if he was resigning to avoid the scandal of the truth finally coming out. I don’t think that’s the case though.

He hasn’t seemed all that concerned about any scandals, following his boss’ example of calling them all “phony scandals.” Besides, I saw a preliminary report on his resigning about a week before he made it official.

One would think that with Eric Holder out of the way, we could finally get an Attorney General into office who will be an impartial supporter of the law. Once again, I don’t think so. That would require that we had a president who believed in supporting the law.

While I don’t know if Obama has asked his opinion, that won’t stop Al; he’ll be sure to tell Obama what he thinks, throwing race cards all around while he does.

The replacement has probably already been picked anyway, or this move wouldn’t be happening. You can be sure that it’s not being done to protect the president from any embarrassment of Eric Holder being guilty.

As far as the race baiter in chief is concerned, anything he or his cronies do is above the law anyway. He’s probably already got Eric Holder’s presidential pardon signed and ready for delivery at the appropriate moment.

To understand what’s happening, we’ve got to look at the timing. The 2014 mid-term elections are less than two months away. That’s a critical date for the Democrats. As it looks right now, there’s a good chance they’re going to lose control of the Senate. That means that the president is going to lose the ability to put whoever he wants into office as the next Attorney General.

Remember, Harry Reid enacted the famous “Nuclear Option” just so that Obama could stack the courts and the Executive Branch of the government, without any interference from the Republicans.

As it stands right now, whoever he proposes will be confirmed by the Democrat majority of the Senate. If he loses that majority, he might actually have to try working with the Republicans and pick people for office that the Republicans will agree to.

So, step one of this plan seems to be getting another race-baiting Attorney General, who doesn’t care about obeying or upholding the law, into office, before it is too late. But is that all? I really don’t think so. With all of George Soros’ think tanks working to help develop Obama’s strategy, I think there’s more.

Besides, she wants to stay on the bench long enough to beat the record for being the oldest sitting member of the Supreme Court.

Eric Holder’s name has already come up as a replacement for her, should she step down and retire. Since Holder is only 63 years old, he would be one of the youngest members of the nation’s highest court, able to serve and spew his racial hate for a good ten to twenty years.

So, step two of Obama’s plan might very well be getting Eric Holder onto the Supreme Court. But that still wouldn’t be good enough for meeting his needs. The court currently consists of five conservative members and four liberal ones.

Actually, one of the conservatives is a true moderate, so the court is currently pretty well balanced. To repeat myself, that’s not good enough for Obama’s needs. He needs a Supreme Court that’s decidedly liberal, to counter a divided Congress.

In order to get what Obama wants, two of the Supreme Court justices would have to resign or die. On top of that, he’d need for the Senate to remain under the control of the Democrats. Only then could he put Holder and one other strongly liberal justice in place, swinging the Supreme Court to a clearly liberal majority.

What’s the chance of that happening? Well, if you were a statistician, you’d probably give a number somewhere in the realm of astronomical. But if you were a bookie, you might see it as a possibility.

There have been a number of “mysterious” deaths over the last six years, especially of people who could testify against Obama and his cronies. With that sort of a track record, it would seem that being a Supreme Court Justice, especially a conservative one, would be about the same as walking around with a target painted on your back.

Would they do that? Well; that’s anyone’s guess. It seems that when people reach a certain level of wealth or importance, they start to believe the rules no longer apply to them. These people always seem to find others who will do their dirty work for them, in exchange for enough cash or other favors. So, I’d say that the risk is a real one; how real is the question.

Considering any such crime would be investigated by the Attorney General’s office, imagine what the results would be. After all, Eric Holder appointed an Obama fund-raiser to do a “totally impartial” investigation into the IRS scandal.

He or his replacement would just find another fox to guard the henhouse, proclaiming impartiality all the while. Somehow, that doesn’t give me a warm fuzzy feeling.

I know this though, if I were sitting on the Supreme Court, I’d make sure that I had plenty of bodyguards hanging around that I could trust. At a minimum, that would mean that they don’t report to anyone in our current liberal administration. I’d also start wearing a really good bullet-proof vest and spending some time at the range, honing my own shooting skills.