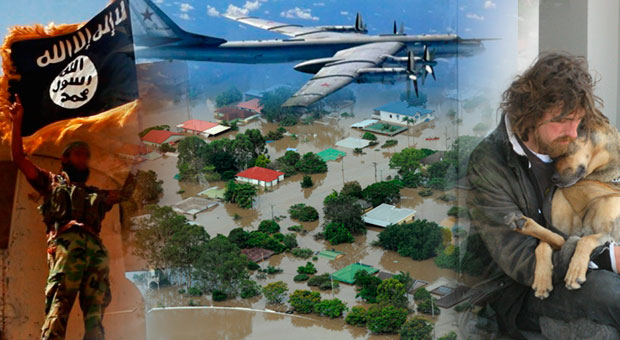 As we reach the end of 2014 and are heading into 2015, I see something different happening; different than I’ve ever seen before. The start of a new year is typically a time of hope, as we look with anticipation towards the great things that the new year will have for us. Yet, as I look around me, I don’t see much hope on people’s faces.

The anticipation that I see is of something bad happening, not something good. There are so many problems in the world right now that people aren’t looking to see what good thing is coming, but rather which bad thing will blow up next.

I can’t really blame people for that; because as I look at what I see in the news, I don’t see a whole lot of hope either. We still have the same enemies and the same problems. The president hasn’t changed, unless it is to be more unilateral in his decision making.

Congress is changing, but the leadership is a bunch of RINOs, who are used to knuckling under to the Democrats; so, I don’t have a whole lot of confidence in them. With all that, where is the light shining?

We’re very likely to see a racial civil war break out in the country, as impoverished blacks take out their anger and whites react. Sadly, it is the innocent who will often be the target.

ISIS and Other Terrorist Organizations

Terrorism is clearly on the rise in the Middle East and around the world. Islamic extremists are becoming bolder in their campaign against everyone else. This is seen no more clearly than with ISIS. They will continue to grow and take over more land, unless American troops are committed to battle.

However, our president has made it clear that he has no intention of attacking any Muslim organization, regardless of what they do. If anything, he’s more likely to attack those that oppose the terrorists.

I am surprised we haven’t seen any terrorist attacks in the United States in the last few years. The FBI is claiming credit for this, but I don’t think it’s credit they deserve. Rather, I think that the terrorists are building networks in the United States, so that when they do attack, they’ll have enough people and equipment to make it worthwhile.

I’m afraid that could very well come next year.

From the end of World War II to the fall of the Berlin Wall, the United States kept the Soviet Union’s desire to conquer the world in check. When the wall fell and with it the Soviet system of government, that need ended… at least for a while. But Russia’s imperialistic ambitions never ended. It was just that their ability to do anything about them was put on hold for a few years.

Now, thanks to the policies of Barack Obama, the United States has been weakened. Even more importantly, we have been perceived to be weakened by our enemies around the world. While our military is still stronger than theirs, our political will is not.

Vladimir Putin has seen this weakness and stepped up to fill the void. His actions in Ukraine are nothing more than that. He’s laughed off the weak reprisals that Obama has levied against him and his country. They have not hurt him and if anything have shown him that he can continue gobbling up European countries without any care of retaliation from the United States.

The big question for us is whether or not it reaches the United States. I believe that has more to do with whether or not it becomes weaponized by any of the terrorist groups. Such an attack would wreck havoc on our society and our economy.

The economy will not see any marked improvement as long as Obama is in the White House. He will block every effort by the Republicans to stimulate business growth, calling them “unfair.” The continuing class warfare of the liberals and their lapdog media will keep enough of the population angry at big business and the wealthy people who own those businesses, that economic recovery will be impossible.

There is a very good possibility that we will slide over the cliff into a financial collapse. Quantitative easing, which was propping up Wall Street, has ended. While we haven’t seen a crash in stock values, everyone is still holding their breaths.

The economy can’t improve, until people are confident enough to spend their money, rather than hold onto it. That won’t happen as long as Obama is in the Oval Office, continuing his policies of hampering business growth.

Obama has put everything into place so that he can declare martial law at a moment’s notice. All of the government’s agencies have been militarized. The DHS has its own army, and our military leadership has been weakened. All he needs is a good enough excuse to declare martial law and I believe he will.

We all know that Obama is a narcissist. He is convinced that he belongs in the Oval Office and that his actions are right. It’s the typical liberal progressive superiority attitude, taken to extremes. I can’t see him giving up power easily or willingly, he would declare martial law and suspend the Constitution, before he would let that happen.

While there is a constant ongoing risk of Obama declaring martial law, I really don’t think it will happen in 2015, unless he is offered an excellent opportunity to do so. Since everything for him is politics, it is much more likely that he will do it in conjunction with the 2016 elections; either before to prevent the elections or afterwards, if he doesn’t like the results.