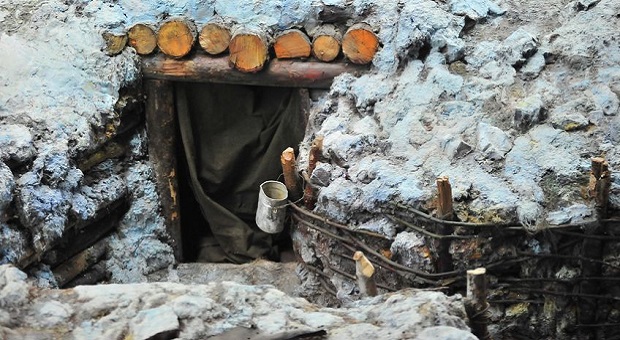 How To Dig Your Underground Shelter

With the economy tanking and so many bad things happening all around us (the latest one being that pretty tense situation in Ukraine), a lot of people are starting to wonder if it’s time to take steps to protect themselves and their families. Should you be preparing for that “doomsday scenario” preached about by lots of survival gurus? It certainly can’t hurt.

I must admit that reading the daily news, sometimes it feels just like it was in the fifties when we were engaged in a cold war (about to turn hot and nuclear) with the Russians and people were digging fallout shelters and hoarding supplies like there was no tomorrow.

Fortunately, the day of reckoning never came, but I bet that many of those fallout shelters are still in place, waiting for their moment of fame and glory.

Obviously, the worst case scenario would be an “all bets are off” nuclear war with Putin’s Russia, but there are other (and more plausible) SHTF scenarios that we should be worried about.

A terrorist attack or a natural/man-made disaster are both scenarios that we may realistically have to be worried about. I’m an optimist but I always take into account the worst case scenario; I’m that kind of “hoping for the best while prepping for the worst” guy.

This preamble is aimed at convincing you about the utility, if not necessity, of digging an underground shelter, an increasingly popular DIY project in the prepping community.

If you’ve wrapped your mind around this concept, you must know that a DIY project like this may be the ultimate idea when it comes to providing security for you and your family, assuming you have the space and the means to do it.

What you need to know about digging an underground shelter is that, even if it may sound complicated and expensive, it really isn’t. As a matter of fact, it’s quite the opposite. I’m not talking about a huge investment or endless back-breaking days of shoveling and moving piles of rubble!

What You Need for the Project

A decent underground shelter can easily be built at a reasonable price, especially if you’re ready to invest some elbow grease into the process.

The basic construction materials are cheap (even free of charge, depending on what you choose to use for the project) and the blue-print for a DIY underground shelter is pretty straight forward.

The good news is that you can build yourself a cheap underground shelter almost anywhere, because these types of structures aren’t usually subject to any building codes whatsoever. The only thing to keep in mind is that the structure must be relatively small, usually less than 200 square feet, but the regulations depend on your actual location so you need to check that out with your local authorities just to be sure.

When it comes to budget prepping, one of the cheapest ways to build underground structures is with earth bags. You can build for as low as $10/square foot, especially if you’re using found/recycled materials; these will significantly drop the price of construction. Earth bags are usually big polypropylene sacks filled with dirt and used like bricks, stacked together and tamped solidly.

Even if it does sound weird, keep in mind that constructions using earth bags were used for hundreds of years and are incredibly strong. They’re perfectly able to withstand disasters like earthquakes, hurricanes and tornados. They even pass California’s strict earthquake testing laws – how about that! They’re also bulletproof! I mean, they’re perfect!

Another cool benefit of building stuff using earth bags is that if properly insulated, the structures will keep you warm during the winter and cool in the summer.

There are basically three ways of building this type of shelter: fully underground, earth bermed (partially underground) or fully earth-bermed. Keep in mind that the lower you dig, the more space you’ll have and also the more protection from blasts, and radiation.

But before proceeding with building an underground shelter, you must determine exactly what type of soil conditions you’ll be confronted with. If the soil is soft and shifty, you must build your shelter above ground and cover it with earth afterwards (the fully earth-bermed type).

A fully-underground shelter is the hardest to build, because it requires the most work (excavation is pretty hard to do yourself if you don’t have machinery) and can only be dug in dry or well-draining soils. So if you opt to go underground, you must go for a concrete reinforced type of structure with supportive ground masonry of some sort, but this will considerably increase the costs and it requires advanced construction skills.

If you’re on a really tight budget, and the soil fits the idea, you should go for a partially underground shelter. You must dig down a few feet, build the actual structure using earth bags (as seen in the video bellow) and then cover it with earth.

This is the easiest/cheapest way to DIY an underground shelter and it will save you lots of money in excavation costs, not to mention that you can build this kind of shelter absolutely anywhere, in any type of soil. Also, the earth that you dug out in the first place can be used for covering the shelter afterwards, again saving money in the process (for the additional fill in materials required).

A fully earth-bermed shelter is suitable for clay-rich, rocky soils where flooding is an issue and it involves building the actual shelter at the surface and covering it with earth on top afterwards.

The bags most commonly used in these types of constructions are 18×30 inches in size, as they offer excellent stability and when filled with dirt, they will not break your back! The best soil to use for filling the bags contains 30% clay and 70% sand and it should be slightly moistened before being shoveled inside the bags.

One thing to keep in mind about earth bag building is that you don’t need mad skills or complicated tools or even training. A relatively basic earth bag structure can be easily built with common tools like a level, a hammer and a shovel.  Well, plus the work, which can be exhausting, hence it would be a good idea to conjure your friends and family for this task.

Aside from earth bags, you can build an underground shelter using poles which is a variation of the partially underground type of structure. The idea behind this project is to dig a trench in the ground that’s large and deep enough to suit your needs, and to use logs or telephone poles for covering it, as a roof of some sort.

You will finish the shelter by adding the dug earth on the top of the structure; that will work as an insulating material and also as camouflage. This is a very decent type of underground shelter, again, very easy to build in terms of planning and materials but labor intensive, especially the digging part.

After you’ve finished digging the trench, you must put the poles or logs on the top and keep in mind that the poles must be cut wider than the trench; at least one foot wider to keep them from falling through.

The cracks between the logs must be filled using leaves or cloth and after you’ve done that, you must place the soil that you’ve already dug on top of the “roof” made of poles or logs until the layer is at least 18 inches high. The higher the earth layer, the more protection and insulation you’ll have.

One extremely important thing to remember when building an underground shelter: regardless of the method or type, always build it with two different exits. In case of a fire or who knows what, you don’t want to be trapped inside now, do you?

When the construction job is done, don’t forget the supplies and, most importantly, OPSEC!