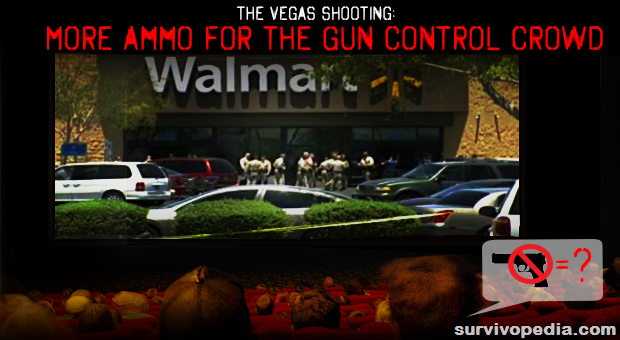 The Vegas Shooting – More Ammo for the Gun Control Crowd

Once again, the nation has been hit by a mass shooting; although this time, it didn’t follow the pattern of most mass shootings. On Sunday the 8th, a couple entered a restaurant and fatally shot two police officers. They then moved to a nearby WalMart, where they forted up in preparation for the retaliation. Before the police finished the couple off, they had killed one other victim.

What makes this shooting different is that it wasn’t in a gun free zone and it wasn’t aimed at racking up a body count of innocent victims. The shooters specifically targeted police officers for their first two victims, although it appears that their selection of the police officers that they shot was random.

{adinserter bph}They also made a public declaration that they were making the opening move in a revolution. This declaration was put on one of the police officer’s bodies, in the form of a note, along with a “Don’t Tread on Me” and a swastika.

While the mainstream media has tried over and over again to connect the perpetrators of mass murder with conservatives, that has been a lie. Other than a few murderers, whom we don’t know the political ideals of, all of the others are clearly liberal. This case appears to be the exception.

Adding to that, Jared Miller, the murderer, was seen and taped at the Bundy ranch in April. He had supposedly left everything to support the Bundy’s in their fight against big government.

He was ultimately asked to leave, by both the militia on site and the Bundy’s themselves, because he was radically opposed to the government and appeared to want a fight with the government agents on site. In his taped interview, he clearly states that if federal agents wanted a fight, they would get one.

The mainstream media has jumped on all this and is using it to create a smear campaign against conservative groups of all types. As usual, liberals are throwing around names like “conspiracy theorist,” “anti-Government,” “Tea Party” and “White supremacist,” whether true or not. From their point of view, this makes sense, as they are more interested in creating a smear campaign against conservatives, than they are in anyone hearing the truth.

Interestingly enough, this shooting happened mere days after Obama and Holder announced the reactivation of a task force to fight “homegrown terrorism.” Based upon earlier statements by the government, as well as government documents, that phrase means “conservatives that don’t agree with Obama’s agenda.”

That raises the question of why the Millers did their heinous act at the time they did. If it had anything to do with the Bundy ranch, one would expect it to have happened in April, after they were asked to leave. It almost appears as if they were waiting for the right timing; timing that had to coincide with actions by other people.

Could this whole thing have been staged? Could the Millers have willingly given up their lives to further Obama’s political agenda? Could their efforts to identify themselves as conservatives that were against the government been planned and executed for a purpose?

There has been so much information which has come out that makes the various killing sprees that have happened in the last few years seem phony. I’m not one who is quick to accept those types of revelations, but with so many, one has to wonder. Could all the mass shootings be part of a bigger plan, orchestrated to give Obama the excuse he needs to take total control of our country?

One thing is certain; whether these, the Sandy Hook shooting, the Boston Marathon bombing and other incidents like this recent shooting have been orchestrated or not, the liberal administration, aided by the liberal media, are making good use of them. They are successfully painting the picture that true patriots are murderers and they are using it to push their agenda to take away our guns.

It doesn’t matter what statistics and facts say; liberals will use these events to twist the future of the United States to fit the socialist mold that they want. The issue has never been gun control, that’s just the talking point they use, so that they can get the total control that they want.

Each of these events brings this country closer to the point of a new armed revolution. The harder liberals push their agenda, the angrier conservatives get. It is only the self-control that most conservatives have which has kept this from becoming a blood bath already; but how much longer can we go?

When will things reach the point where they push too far and somebody makes that next shot that will be heard around the world?

My friends, be ready. You must make up your mind today where you stand. When they start knocking on doors and taking away guns, what are you going to do?

Each of us needs to know before it happens, or all our options will be taken away.