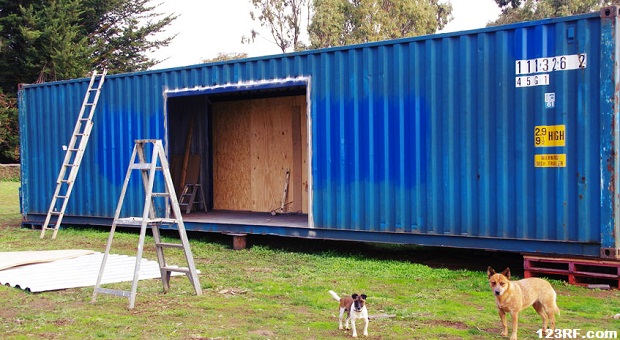 Pros and Cons for Building a Container House

As more and more people think about establishing a bug-out retreat, one of the most popular building styles that has emerged is building a container house.

While building a nice container house is a lot of work, used shipping containers actually make for very reasonably priced building material. Considering that they are already structurally sound, they are one of the cheapest possible ways of building any sort of small dwelling.

Underground or Above the Ground?

When we talk about container houses, we’re really talking about two totally separate types of buildings. The first is the above-ground home, which is made of any number of shipping containers forming the basic structure. The other is an underground bunker to hide away from everything that could seek to do you harm.

But the skin of the shipping container is actually rather weak. Backfilling dirt into the hole to bury the container will be enough to cause the container to collapse.

If you want to build an underground bunker or home, you’ll be much better off with cinder blocks or cement, than you can possibly be with a shipping container. However, that doesn’t mean that shipping containers aren’t a good choice for above-ground construction.

Of course stacking means stacking at the corners, where the strength is. If you want to stack them in any other way, you need to run I-beams from end to end, so that the lower container will support the upper level. Still, there’s nothing wrong with this and it’s really not all that expensive to do.

By stacking containers, it is easy to create the rough outlines of the house. They can be welded, bolted or pinned together, as well as being bolted to the foundation, in order to create a sturdy structure that isn’t likely to blow away.

How Easy Could It Be?

While both professional and amateur architects have made a wide variety of homes out of shipping containers, there are some design limitations that they pose. First of all, the size of the container itself poses limitations. They are only eight feet wide, and come in 20 or 40 foot lengths. So in most cases, the rooms are limited to being only eight feet wide as well.

Of course, this limitation can be solved by attaching two containers together or by building off from the side of a container with more traditional building materials. While it is more expensive to build in either of these ways, than just using the containers, it greatly expands the possible designs that can be built.

Modifying the containers themselves isn’t really all that hard. The soft steel sides cut fairly easily with a reciprocating saw for the installation of doors and windows. Some very nice designs have been created, in which whole wall sections are replaced with sliding-glass patio doors, leading out onto a deck. You are generally better off installing a door, than trying to use the container’s pre-existing doors.

Another problem area is that of insulation. Metal walls don’t provide anything in insulation value. Adding insulation on the outside of the walls eliminates all the benefit of using containers as building material.

On the other hand, adding insulation on the inside reduces the available width of the container. To deal with this, most people only insulate their containers slightly, making them ideal for temperate climates, but not as effective in more extreme weather.

The skin of the container isn’t as bullet-proof as some seem to think. While it is steel, that doesn’t mean that it can stop a sniper from shooting you. The thin steel walls will clearly stop a .22 long rifle bullet, but won’t do anything to stop a round from a hunting rifle.

With all this in mind, there are clearly some times when building with containers provides some excellent advantages. The key is developing a design that takes full advantage of the containers’ structure and benefits, while avoiding the weaknesses of the container as much as possible. If you can avoid those weaknesses, you can make yourself a very nice cabin in the woods, without spending a fortune in the process.