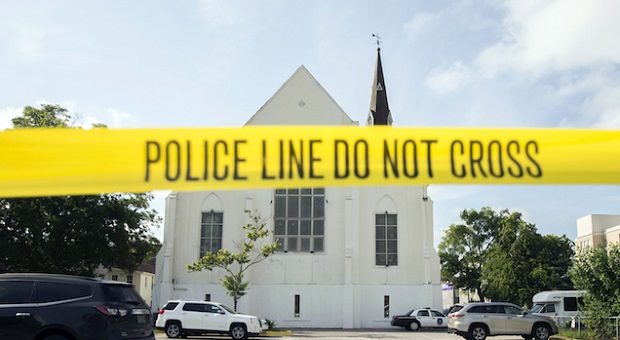 Another Shooting – And The Predictable Response

Once again the news is filled with the story of a senseless shooting; this time in a church in Charleston. This one is a bit different than the other shootings that have happened, in that it looks like this one may actually be racially motivated, at least to some extent.

If the reports are correct, a young white man walked into a historic black church and joined them for a Bible study. An hour later, he pulled a gun and started shooting, killing nine people. According to one relative of a victim, the shooter reloaded three times, although I have to wonder how they know that for sure. If their relative died in the attack, who told them that little detail?

Little is known about this young man, but from patches on the shooter’s jacket and posts on his Facebook account, as well as comments he supposedly made during the shooting (also reported by the same individual with the dead relative) this event appears to have been racially motivated.

But… and again I say but… every time there is a white on black shooting, there are people who claim it’s racially motivated. So, I think it’s best to reserve judgment on that score until all the information is in.

Cavalry to the Rescue

It’s interesting that this was a church this time. These mass shooters always pick places that are gun free zones. Apparently the shooter thought that churches fell into that category. After all, who, besides me, carries a gun in church?

If there was a concealed carry holder there in the church, he or she eventually would have lead into the shooter, convincing him that his game was over. His response, as with so many others in the same circumstance, would have been to turn his guns on himself and turn out the lights. Of course, you would nevre hear about such a thing. Carrying a gun in the church doesn’t fit in.

Later, the shooter was caught thanks to a brave florist who spotted and tailed him until the authorities arrived. Sadly, while the woman who helped stopping the shooter may only be lauded locally, the killer will be lauded nationwide.

This will help to fuel the fire, encouraging other unstable individuals to seek out their moment in the limelight and see what kind of body count they can rack up. Everyone ignores it, but all the media attention these demented individuals receive helps to encourage the next one.

Less than 12 hours after the shooting, Obama was calling for stricter gun control. As Chicago’s mayor Rahm Emmanuel said, “Never let a serious crisis go to waste.” Considering that Obama was raised in the Chicago political machine, it’s not surprising that he has once again chosen to put politics before humanity and speak about the “bad guns” rather than console the families.

{adinserter aliveafteramerika}In fact, Obama has reacted in the exact same way in every shooting that’s received national attention, since he took office. It’s almost become comical in its predictability; kind of like a prophet prophesying their own will as that of God.

It doesn’t matter what the truth truly is, the answer is what the progressive liberal movement wants… to take away the gun rights of law-abiding citizens.

Forget the fact that most of these shootings are done with guns that are acquired illegally. Their actions somehow manage to prove that law-abiding, conservative patriots are all murderers who tote guns around, looking for an opportunity to kill someone. Of course, if their narrative were true, there would no longer be a debate about gun control. The conservatives would have killed off all the liberals, ending the debate. But that isn’t true, except in their minds.

Once the dust settles and the truth comes out, we’ll probably find that the shooter got his guns illegally, just like in the other cases. He’s acted as a criminal and that’s what criminals usually do… get their weapons illegally. We shouldn’t be surprised if it’s true.

I will also have to say that there were a few things in the president’s address that I agree with. He said, “I’ve had to make statements like this too many times.” That’s true. Each one is a tragedy that we don’t need. But rather than use the tragedy to find some true solutions, he’s using it for political gamesmanship.

He also said, “There is something particularly heartbreaking about a death happening in a place where we seek solace and peace.” I don’t think anyone could disagree with this and I thank the president for this rare positive comment on Christianity.

Once again, Obama showed his sensitivity to the feelings of the victims and their families by jetting off to a fundraiser for the DNC, right after his announcement. I’m not sure how he thinks that’s leading; but there’s more to leadership in a crisis than just taking a moment out to turn it to your political benefit.

Sadly, Obama and his cronies can’t see how they are contributing to this sort of event. Taking away gun rights won’t solve the problem, unless you can undo the physics that makes guns possible. I honestly think that’s what gun control advocates want; but it can’t be done. As long as physics is physics, guns will be guns. Outlawing them won’t make them go away.

So, we’re probably going to see some liberal push for new gun control laws and perhaps some illegal new executive orders. But we’re not going to see anything meaningful done. That would require Democrats paying attention to facts for a change, rather than emotions, inflammatory rhetoric and their  political agenda.

What Needs to Be Done?

It is clear that guns themselves aren’t the problem. People kill people all the time with things other than guns. It’s also clear that making more restrictive gun control laws won’t stop gun violence. All it will do is make a larger pool of victims for the criminals to go after.

Contrary to what Obama said about the U.S. being the only industrialized nation where mass shootings happen, we aren’t. We’re number seven on that list and the top five all have restrictive gun control laws. That didn’t stop them from having gun violence.

It’s time to seek out the root of these killings. What do they have in common? It’s also time to take an honest look at the mental health of the shooters and find out what that had to do with their actions. The information I’ve seen shows that a number of these shooters are being medicated for mental and emotional disorders. If that’s the case, the root of the problem isn’t the guns, it’s their medications.

Movies and video games have also been mentioned as potentially playing a part in these crimes. While most of us can differentiate between real life and what we see on a screen, small children can’t. What if there are some people who have trouble outgrowing that and never really see the difference? Even worse, what if these shooters see what they are doing as a big video game that they are playing out in real life? Could that be their motivation? If so, that’s scary.

The problem won’t get solved by playing politics, but rather by seeking out its roots. In the mean time, we need to look at what will help protect the innocent from becoming victims. There are ample statistics that show that an armed population reduces crime, but there are still too many people who won’t even listen to those statistics, let alone use them to eliminate gun free zones and encourage law-abiding citizens to carry concealed.

So, what are you doing about it? Are you carrying? Are you ready to protect society from people like this? If not, may I be so bold as to say that you are helping to perpetuate the problem. If armed citizens reduce crime and you aren’t an armed citizen, then you might not be helping reduce crime.

I made the decision several years ago to get my concealed carry license. Since then, about the only places where I don’t carry are in the shower and in the gymnasium. Although, looking at some of the gang members in our gym, I’d rather be carrying there, if I could conceal it.

Why do I carry? Because I might end up being the one who is able to stop a mass killing. Granted, odds of that are extremely slim. But the odds are non-existent if I’m not armed.

How can I, in good conscience, allow others to become victims, when I could do something about it? I can’t. So, I carry. Hopefully, I’ll never have to use it. But if someone comes in my church and decides to shoot it up, I’ll be ready.