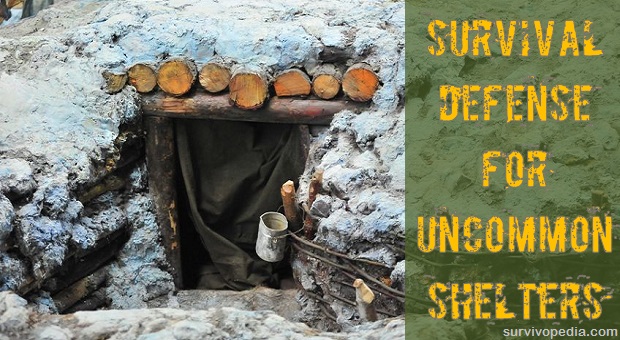 How do you protect your home, retreat or homestead if it is underground or if it is of different design and construction than a regular house? What about improvised shelters in the woods or temporary camps?

Many self-reliant people build homes of unconventional materials such as CONEX container houses, underground houses, earthbag domes or earthship houses to make use of their passive solar features, insulation, low cost, non-flammable properties, or the fact that they provide better hard cover against small arms fire than wood-framed homes.

Many readers have also asked about how to defend campsites or improvised wilderness shelters.

Tactics and strategy for the two scenarios have some differences, but correct principles of home and retreat defense apply to both, so I will lay out some pointers for retreat defense then and list some specific tactics for camps.

Do not let yourself become boxed-in. This is common mistake in bunker design. Building a safe room or bunker with a single point of entry and exit is a grave mistake. Unless you maintain the option of mobility, your shelter could become a death trap.

Building multiple hidden escape routes will allow you to bypass the fatal funnels created by doorways, window and hallways and improve chances of escaping undetected. Make sure that personnel can also reach your LP/OP (Listening Post/Observation Post) and return to barracks undetected. Obvious changing of the guard according to schedule can give away your LP/OP’s location.

In addition to making sure that the design of your unique structure does not limit your own mobility, you want to design your shelter, outbuildings fences, fields and unimproved land to deny mobility and tactically advantageous ground to your enemy.

Leverage the Inherent Defensive Characteristics of Your Building Materials

Make the most of your materials and construction method starting in the design phase.  Many less-conventional construction materials such as containers, earthen berms, earth domes, earth bags, stone and concrete, are largely non-flammable and highly resistant to small arms fire.

With relatively small investments in the design and construction phases, many can non-conventional structures can be engineered and built in a fashion that will enable them to absorb much more kinetic damage than traditional construction.

While burning defenders out is an ancient tactic that is difficult to defend against in a wood framed home, defending a home against fire becomes a reasonable goal if you construct your home of primarily inflammable materials such as containers, earth, concrete, brick or blocks. 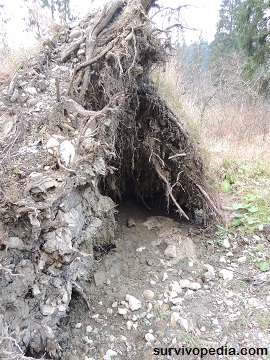 Containers lend themselves to the construction of fort or motor court style homes where an inner courtyard can be enclosed by containers arranged in a square instead. Some of my pioneer ancestors built their homes and dugouts in a similar fort style when they colonized the West and made double use of the tactic in route by circling their wagons.

In fort-style structures, outbuildings extend into the courtyard and fields are cleared and planted outside the forts to afford an unobstructed line of sight and fire and provide a firebreak between the dwellings and forested areas.

Containers can be stacked or up-ended to gain the advantage of height. The walls of an up-ended container form a structure not unlike a square castle tower. In some cases, certain container homes may not need a building permit, which can go a long way toward keeping your “hidey hole” hidden.

Many underground and earth berm homes have soil rooftops that can be planted with vegetation to prevent erosion. A little attention in the design phase can break up the outline of the home, and camouflage it. An earth roof and mature vegetation can also help hide the shelter from the air, satellite imagery and IR sensor technology.

Compensate for Any Vulnerabilities Inherent to Your Chosen Building Method

Subterranean structures are often vulnerable the introduction of water, smoke, gas, accelerants and grenades. Compensate for these vulnerabilities making provide good situational awareness and respond to a threat or escape before enemies are able to trap you in an underground shelter.

Depending on the strength of the enemy you face, it may or may not be advantageous for your home to look like a bunker.

Choosing Your Camp Site
First of all, you need to exercise great care in your choice of campsites.