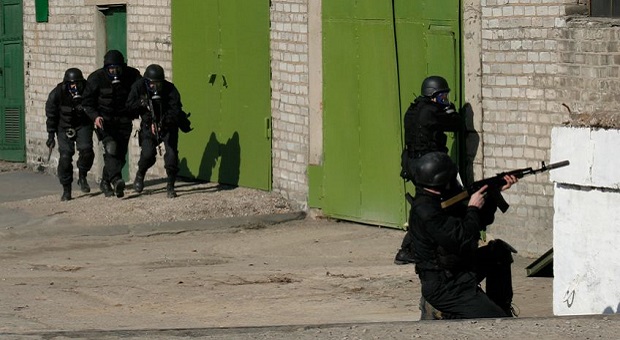 SOP: The Routine That Saves Your Life

You don’t have to be an army, a SWAT unit, or a fortune 500 company to use of standard operating procedure (SOP). A small family of four could also build his own SOP, so they would know how to survive when the world as we know it seems to head to its end.

Probably, you would say that building that lifesaving SOP is rocket science, but it’s not.

It can be as simple as regimen or checklist that keeps you from forgetting important steps or training under stress.

What Is SOP and Why Do You Need It?

In self-reliant circles, SOP largely comes from regurgitated US military doctrine, which is quite often a very poor fit for small groups of people with goals very different from those of US military units.

But military doctrine does contain a lot of sound doctrine rooted in correct principle, and SOP is one such example.

SOP does port over to self-reliant disciplines very well and you would do well to leverage this important tool.

SOP is how militaries and large corporations like McDonald’s achieve a high degree of operational excellence with average and sometimes below average personnel. The have solid SOP and thoroughly train their personnel in it.

People do not eat at McDonald’s because the food is fantastic, they eat there because it is consistent. No matter where you are in the country or the entire world, you know what your burger will taste like, that it will not be cold and that you will get it fast.

That consistency comes from operational excellence, which comes from creating solid SOP and repetitively training personnel in SOP.

In order to create a SOP, there are a few steps to be taken:

1. Involve the personnel who will execute the SOP in the creation process.

Getting the people who will abide by and execute the SOP to “buy in to it” results in a quantum improvement in effectiveness. The best way to get “buy in” is if it is “their” SOP.

2. Determine the Objective or Desired Result of the SOP.

Imagine the SOP does not survive enemy contact, and your personnel will remember nothing else but one simple sentence as they try to achieve their organizational mission. Decide what you would want that sentence to be and you have your statement of commander’s intent.

At this stage we are focusing on the spirit as opposed to the letter of the SOP. Now that we have a statement of intent, we want to flesh out a mission statement. Add a more detailed description of the desired results after the statement of intent.

The idea of this portion of the SOP is to keep personnel on track toward the end result and remind them why it’s important. Describe the mission you intend the person or group following the SOP to achieve. Explain exactly what constitutes its successful execution.

Try to use quantitative terms when possible as they are more easily and accurately measured by most people. In cases where you can’t describe the desired results using numbers, describe them qualitatively. Be descriptive. This isn’t the place to leave out important details.

Unless this is very detailed SOP, this probably will not take more than a paragraph of two. If the SOP is extremely simple, you may not even need anything beyond the statement of intent

Keep the person or people in mind who will be using the SOP as each phase in the SOP creation process is completed. This is especially important when writing and SOP for a group since it is essential that every one of them be able to understand it clearly and their understanding of the subject may vary substantially. Keep trying to “grunt-proof” the SOP.

Choose a logical title for the SOP. Privacy, technology and people all change over time and the SOP will need to change with them.

Down the road, this will result in multiple copies of the same (more or less) document floating around, each with differences small enough to be overlooked by the reader, but that were made for good reasons. You can avoid this confusion by naming SOPs in a logical manner.

A title, date and/or version number should suffice in most instances. Organizations that deal with a lot of SOPs will want to create a standardized naming convention to ensure uniformity in titles in order to make SOPs and other files easier to find in a sea of documents.

A naming convention is essentially an SOP for naming SOPs or other documents. That might sound like a little much, but its value should be immediately apparent to managers or officers trying to “grunt-proof” procedures.

Structure the SOP logically. The amount of information and instruction that needs to be conveyed and how simple or complicated a process needs to take place will help determine which structure is best.

You may determine that a checklist, a “to do” list, a numbered list of steps, a few bullet points, a diagram, a flowchart, a form, a hierarchical list of steps is best or a combination of the these would be most effective.

Organize the SOP in a way that will makes sense for the person who will be using it and under the conditions they will be using it. Whether the structure is simply a mental note, a paper form, a notebook, a laminated checklist a computer program or a combination of structures really doesn’t matter as long as it’s effective.

As in the structure phase, keep the people who will actually be using the SOP in mind as you write it. Involving them in the process of writing or creating the SOP can yield synergistic dividends when possible and appropriate.

Include and/or identify resources and tools at the individual or team’s disposal. Sometimes it helps to categorize them as mission-critical, mandatory and optional. People can’t make use of resources they don’t know exist.

Some examples of resources and tools are: regimens, checklists, paperwork, reference material, procedures, instructions, training, computers, money and human resources. Other people can make or break SOP. Depending on how well you have prepared them and other factors, people can compromise your SOP or cover where you’ve slipped up, so don’t leave them out of the equation.

Lay down important the important rules, guidelines and guiding principles that should not be broken or transgressed. Focusing on the end result of increased privacy is important, but it needs to be balanced with everything else that’s important. Some people take approaches that are too single-minded, end up breaking the law and wind up with less privacy than they started with.

This is also not a good are to skimp on detail. Explain under what circumstances the consequences will be enforced, by whom, when and where they will be enforced. Identifying consequences may be very simple if you are the only person using the SOP. It will take a little longer if other people are involved.

Test the SOP by using it in trials before implementation. You may reach the desired results without a single bump in the road or you may hit obstacles and road blocks at every turn.

When testing a group SOP, do not have the most knowledgeable people or the people who wrote it try it first. Have a diverse group test it, and start with people who have had the least exposure to the subject matter and the SOP test it. They are more likely to discover any shortcomings.

Debrief after testing the SOP and review its effectiveness as a group. This will benefit both the personnel and the SOP itself. Reviewing the SOP in terms of effective and less effective as opposed to good or bad will help keep your emotions or the emotions of the authors and testers out of the equation and help the entire team to be more likely to agree to potential improvements.

Make changes to the SOP based on testing and the recommendations of the test group.

Repeat the process until following the SOP achieves the desired results and the SOP is ready for implementation. 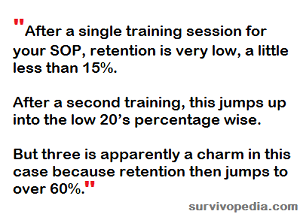 Train yourself and/or your organization as necessary. This can be as simple as a sticky note on your refrigerator or as involved as a course of study requiring testing and certification. Make sure that the SOP is understood paying special attention to changes intended to override existing SOP.

In most cases, personnel benefit from repetition in skill training. How many times should they attend each training? Train THREE TIMES.

The military has done extensive research on the benefits of repetition in skill training. After a single training session, retention is very low, a little less than 15% as I recall. After a second training, this jumps up into the low 20’s percentage wise. But three is apparently a charm in this case because retention then jumps to over 60%.

The benefit of additional training sessions after the third is negligible until you get up into numbers that will far exceed most people’s patience for repetition in training on SOP. Three is pushing it for some of us, but it is well worth the extra effort.

If you only train your people once, you might as well just save yourself the bother, toss them in and let them sink or swim.

Distribute the new SOP to everyone expected to follow it or be involved in any part of this process. Make sure everyone knows when any SOP or changes in SOP go into effect. This could be a memo in a large organization or could be an informal huddle in a small one.

If the SOP will replace an older SOP, make sure that everyone is aware that a new SOP has been issued, its date and version or revision number. Then collect old copies to eliminate possible confusion.

You are now armed and dangerous in regard to SOP creation and implementation. I hope that you use this important tool of self-reliance, business and life to the best possible effect.