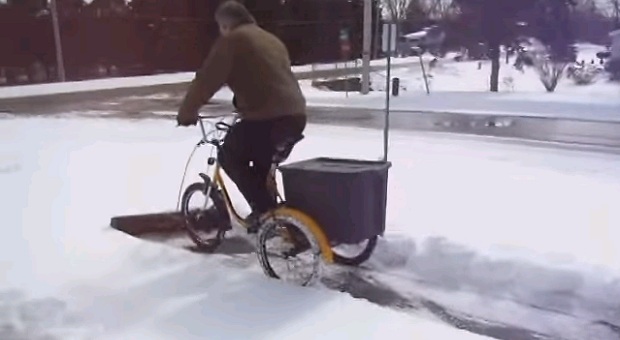 Winter Survival: How To Snow Shovel Like A Pro

After the record breaking blizzard that has buried the mid-Atlantic in snow, we were faced with a new set of challenges. We’ve talked about insulating your home and making sure no energy is wasted, how to use snow to insulate your home and how to deal with your car and driving under similar circumstances.

What do you do when you are practically paralyzed by the heavy snowfall? How do you get around when flights get cancelled and roads get closed and when nobody even bothers to make sure these roads are accessible to the ambulance and the fire fighters?

Some may say that residential roads fall in the owner’s care and they are the ones who should deal with the snow on those portions. But what happens when the owners are elderly or disabled people, or otherwise unable to shovel this kind of snow and unable to pay for this service?

We all know that this storm proved deadly to many. Did you know that a significant number of deaths were caused by heart attacks linked to shoveling snow? So our concern, and yours I hope, is legitimate..

You might not think of it this way, but shoveling snow is intense physical exercise that can prove to be fatal for those at risk. In the case of snow shoveling, the stress of the intense physical activity combined with cold temperatures that constrict blood vessels.

This situation gets even worse if you don’t stay properly hydrated because the blood will also lose some of its moisture and may also become more prone to clotting. For many, these factors become a fatal mix.

The categories considered to be at the highest risk in this case include:

Besides the risks described above, many people also wind up with more common problems such as sprains, strains, sore muscles, and lower back injury. the more common health risk shoveling snow poses is that of low back injury. So whatever your age and your health condition, when dealing with this task you must take precautions.

First thing, before getting to the shoveling part, start with a 5-10 minutes warm up. Move your arms slowly forward and backward, hold a body hug for 30-60 seconds, gently stretch your legs and back and take a brisk walk to help your muscles warm up. If you have a bad back or you are over 55, it is better to ask for help than risk your health and your life!

Picking a good shovel is also something you must pay attention to. If you choose an ergonomic one, with a curved or adjustable handle, it will take a lot of the effort off your back and your knees. Take care, when holding the shovel, keep your hands distanced on the shovel’s handle in order to distribute the force equally. When digging up snow, make sure the force comes from your legs and not from your back, keep your knees slightly flexed in order to help with that.

It is always safer and easier to push the snow aside, instead of lifting it and carrying it from one place to another. But if there’s no other way, make sure you keep your loads light and your knees flexed while doing so. Never throw snow over your shoulder!

Many situations that create a need to move snow from one place to another actually come from letting it pile up too high before shoveling. If you bundle up good and out every few hours, you will find the work far less strenuous.

Two inches can be shoved aside with ease. But, if you wait for 6, 8, or 12 inches to pile up it will be much worse. Even though some snow may blow back during the storm, you will still have more cleared and less effort to put in over the course of the storm.

Stop for two or three minutes every other 10-15 minutes, and stretch your back, arms and shoulders. While tackling snow, remove the top layers first instead of going in depth. It’s much easier this way, especially for your back! And also consider removing the snow during 3-4 days rather than in one.

Other recommendations include: layer clothing in order to keep warm throughout the process. If you get too hot, it is also easier to remove the layers as needed.  Drink plenty of water, but avoid alcohol, caffeine and smoking. These things will overburden your heart and will also increase chances of frost and hypothermia.

How to Build Your Tools for Snow Shoveling

Now that we’ve discussed some tips on how to handle the snow without ruining your health, let’s take a look at some really cool tools that will help you with your task. And that’s because not everyone was prepared for this type of downfall!

You won’t need much for this DIY tool, just a durable garbage can lid, some screws and a screwdriver, a single-edged razor blade or a box cutter and a wooden broomstick. (Use metal cutters?)

Use the blade (or box cutter) to cut the lid in two pieces with the cut edge acting as the scooping side, while the raised outer brim will keep the snow in place until deposited. The broomstick will become the shovel handle, that you will secure to the lid with three screw. Get the details here.

It’s available for order, but if you take a closer look at this contraption, it wouldn’t be that difficult to DIY. And if you feel like it, you could even help a neighbor or two and make a buck out of it!

3. Snow Shovel for Your Car

Watching this “bad boy” in action makes you want to give it a try even just to test your DIY skills and you car’s abilities. Imagine being able to remove snow from the comfort of your car, listening to your favorite CD and not having to freeze throughout the process. (But you should be careful about using car plows as they can ruin the tranny because there is not enough speed to push those heavy weights.) Here’s another plan of the same idea.

Now, I’m not sure this is actually easier than shoveling snow, but if you like riding you bike it sure is more fun and it seems more efficient. So why not give it a try?

This is the quicker and easier DIY version of the snow shovel for your car. Just try not to steal the parts you need to put it in place as recommended by the video!

The option we saw above are great, but our favorite must be the following two.

I am not sure exactly how this guy managed to fold the snow like that, but he got our respect for it!

Now that you’ve seen how these folks used their imagination and whatever they had on hand to deal with the snow, let us know in the comments below how are things in your area and how are you handling the situation?