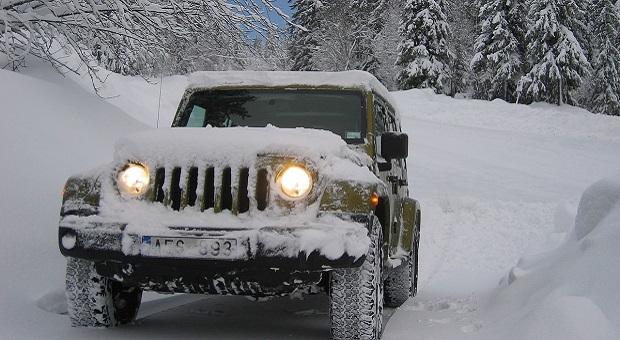 You might not have heard of this, but last weekend Eastern Europe has been hit by a wave of snow and really low temperatures. So much so that roads were closed for over 12 hours.

Maybe this doesn’t seem so unusual, but what capture my attention was the survival story I stumbled upon. This guy managed to stay alive for 3 whole days after the facility he was working in was left without electricity. He got water from the already too much snow, he had some food supplies and his shelter? Well, his car!

It’s almost a miracle that he lasted for so long and he didn’t even need medical care after this ordeal. And although the rule of 3 played an important role in his survival, there is one thing without which he would have tragically failed: fuel. If your fuel reserve won’t last enough, you won’t stand a chance, so you must know how to stretch it as much as you need to.

You don’t have to get to Europe for harsh winter, heavy snow and winter traffic jams. Just take a look at Washington D.C. these days instead.

Is common science that cold weather reduces the range for all vehicles. Fuel economy tests show that a conventional gasoline car’s gas mileage is about 12% lower at 32°F than it would be at 73°F, and it can drop as much as 19% at 0°F comparing to 73°F. As for very short trips (3 to 4 miles of city driving), the fuel economy drops to 22%.

Take a good look at the facts below, as they could really change your perspective when you rely on your bug out vehicle and your winter driving skills for survival.

How Is This Happening?

Engine and transmission friction increases in cold temperatures due to cold engine oil and other drive-line fluids. The engine needs more time to reach its most fuel-efficient temperature, which explains why a shorter trip “costs” more fuel than a longer one. How much would you lose of your economy because of the less efficient components? Up to 14%! Combine trips so you could drive less often with a cold engine.

As for the battery, its performance decreases in cold weather, making it harder for your alternator to keep your battery charged. Drive at least 5 miles between start cycles to fully recharge the battery.

Everything you do to prepare your car prior to driving out of your alley increases fuel consumption, because you use additional power. Heating the cabin, window defrosters, and heater fans are the most “expensive” in terms of fuel, as they all use additional power. And more power means more fuel, which goes your economy down to 15%.

And remember that winter grades of gasoline can have slightly less energy per gallon than summer blends.

Also, colder air is denser, which will increase aerodynamic drag on your vehicle (especially at highway speeds), and decrease your fuel economy up to 5%. Even tire pressure decreases in colder temperatures, increasing rolling resistance and reducing the range up to 4%.

Icy or snow-covered roads decrease even more your tires’ grip on the road, wasting energy. Safe driving speeds on slick roads can be much lower than normal, further reducing fuel economy, especially at speeds below 30 to 40 mph. And remember that using four-wheel drive increases fuel consumption too.

How Can You Solve It?

Now you wonder what can you do about it. We have some clues for you below.

1. Start Your Preparations with a Good Vehicle

First, having the proper vehicle spares a lot of effort. Most preppers agree that less time you spend on the road, less danger you’ll face along the way. You need a vehicle that is not only fast, protective, and off-road capable, but gas-efficient as well. Whether you go with the family’s sedan or opt for a terrain vehicle, your main goal when bugging out is to get far away as quickly as possible. With that in mind, larger and heavier vehicles are bound to come with a drawback in the fuel department.

More, these types of vehicles stand out like a sore thumb when compared to your everyday cars, trucks, and vans. The ability to remain unnoticeable and safe when navigating through heavily populated and hostile areas, is just as important as your vehicle’s fuel economy.

Still, your vehicle of choice will be largely dependent upon your environment. The choice remains yours whether to purchase a designated bug out vehicle or update your daily commuter car for a SHTF contingency. But regardless of choice, the biggest concern for any bug out vehicle is fuel range. Above all other aspects, a bug out vehicle should be prepared and maintained to provide the best possible fuel economy.

For starters, weight is one of the biggest factors deciding a vehicle’s fuel range: an extra 100 pound could reduce your MPG by 1%. Removing any unnecessary equipment, supplies, or people from your car will inevitably translate to lower fuel consumption. That also means stripping the vehicle itself down of any unneeded aftermarket parts. These things reduce the vehicle’s aerodynamics and add weight, which translates to fewer miles.

Some preppers advocate that a bug out vehicle should contain as much food, water, and gear as you can carry. However, your chances of consuming everything on route are quite slim. So is your possibility of taking what’s left with you upon reaching your destination. For that reason, a 72-hour bug out bag for each family member is all the gear you’ll need in the car. Everything else can be found along the way or upon finding safety.

Removing hauling cargo on the roof, for example, reduces wind resistance, and increases fuel economy by 2% to 8% in the city driving, and 6% to 17% on the highway. If you really need to use it for your luggage, opt for rear-mount cargo boxes, which “costs” only 1% to 5% of your fuel economy.

You can also save on fuel by easing your pressure on the accelerator. Slamming the pedal to the floor every time you accelerate consumes significantly more fuel than applying less and gradual pressure. Most vehicles are also at their most efficient when cruising in their highest gear at a moderately low speed (40-50 mph).

Though your goal will be to get out of dodge as quickly as possible, you should still pay attention to your rate of acceleration and cruising speed. Driving fast may serve to get you out of dodge quickly, but doing so could stop you short of safety if your pedal’s to the metal.

Use cruise control if your car is equipped with this feature, and avoid aggressive driving, as speeding, rapid acceleration and braking waste more energy.

Avoid excessive idling too, considering the fact that it can use a quarter to a half gallon of fuel per hour, depending on engine size and other features that you use at the moment. Actually, turning your engine off when you are waiting in your car saves your money, because it takes only 10 seconds to restart when you need to drive off compared to how much fuel is burned while idling.

Despite seeming trivial, under-inflated tires can significantly lower a vehicle’s fuel economy by miles per gallon. Keeping them properly inflated will improve your vehicle’s fuel performance. It will also make for much safer travel across on and off-road terrain.

You should always strive to stay current with preventative maintenance on your car. This means the normal fuel, fluid, and filter changes in addition to addressing any engine problems indicated by the light on your dashboard. What may seem like nothing could be a dead oxygen sensor or related emissions problems that keeps your vehicle from performing.

In today’s economy, most drivers opt for whatever gas is cheapest at the pump. Though some modern cars suggest using higher-octane fuel, most can still run on regular without any consequential long-term effects.

Cars with superchargers and modified intake systems usually mandate the use of premium gas. But if your car is rated for regular gasoline there’s reason to pay more at the pump.

Diesel engines are something to be considered, as they have much greater lifespan than typical engines and can be run using homemade bio-diesel fuel. In a long-term survival situation, gas could become a scarce commodity and mandate the use of alternate sources of fuel. However, it’s still advised that bug out vehicles running on regular gas carry one or two jerry cans of extra fuel that gets rotated into use regularly.

Remember not to use warmers and defrosters more than necessary. Scraping ice every morning makes you sick? Look for natural, low cost solutions, like parking your car facing east or using a vinegar solution for defrosting your windshields.

Locks freeze, windows and mirrors ice over, tires get stuck – ice and snow are just miserable to deal with first thing in the morning, or at any other time of day for that matter. Here are a few tips to remember:

Deciding to brave the roads during harsh winter, will confront you with challenges along the way, making it necessary to choose a vehicle capable to handle a variety of contingencies. Compromise has to be made, as no bug out vehicle can have it all. There is no such thing as the perfect vehicle, everybody has his opinion and makes his personal choices. Finally, the only thing that makes the difference is your skills.