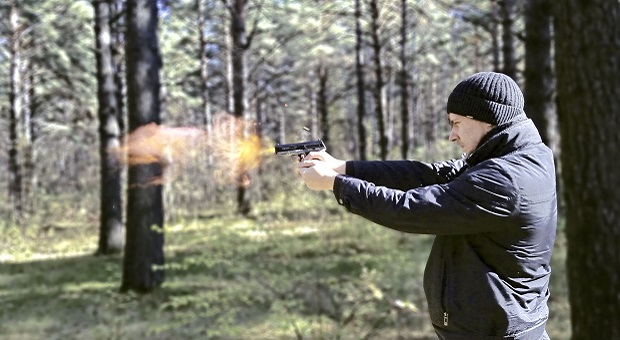 Shoot Or Don’t Shoot? This Is The Question

Motor vehicles and distracted driving claim thousands of lives more per year than guns, but only guns have media bias against them, have millions of dollars aimed at their “removal from society”, and are considered by law to be “lethal force” devices just by virtue of shooting them.

Do you know when it’s legal to draw a weapon and shoot at someone? You as a gun owner have a very large responsibility when you are carrying a concealed or open carry firearm.

If you do not know the laws about drawing and firing a firearm, you could end up in jail because you thought you were doing the right thing; when in reality you broke the law. In some cases, you may be just as much of a criminal as the criminal you tried to stop because there are limits to when it is and is not appropriate to use lethal force.

While you may feel very tempted to fire them or aim them to “scare criminals off”, prevent a theft, or prevent other actions, it can backfire on you because it may not be reasonable to think your life (not property) or someone else’s life is in danger.

Most of the legally armed citizens will never draw their firearms unless in a self-defense incident. It is better to know what to do if you are forced to draw your weapon.

For those individuals who choose to carry concealed, there will be some sleepless nights when you must ask yourself some tough questions.

1 – When is it appropriate to draw your weapon and pull the trigger?

2 – Another question you must ask yourself, is “Can I take a human life if I must?” 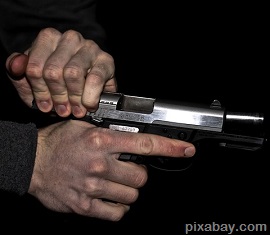 These are two very important questions. If you do draw your weapon and fire there are legal and emotional consequences of making a bad decision.If you do falsely believe that you can take a human life when necessary, and cannot do it when the event comes to pass, the odds are you and anyone you are trying to protect will become victims of this incident.

In this country most state statutes are very clear as to when deadly force may be used. It can only be used in cases of self-defense or the defense of others in imminent danger. Only the individual in the incident knows the point at which they felt their life or someone else’s life was being threatened and in imminent danger.

Sometimes the individual’s perception constitutes a very large gray area. When in this gray area, mistakes are made that will follow you one way or another for the rest of your life.

It is up to the prosecutors to determine if a crime has taken place. It does not matter if the individual had a concealed weapons permit or not, it doesn’t affect how prosecutor’s office evaluates these incidents.

What one individual might perceive as imminent danger could be different from what another person believes. When a prosecutor looks at a case he must determine whether or not the person using self-defense has a reason for shooting, possibly injuring another person, or killing a person in this incident.

What If You Draw Your Concealed Carry Weapon Without Shooting It?

Some attorneys will tell you not to say anything at all to the local law enforcement, especially if there were no shots fired and no injuries. If they are wrong you could end up paying for attorney fees to defend you if you are arrested.

It is much better to speak up and let the authorities know what happened and go on the record before they are dispatched to get you and bring you to the police or sheriff station.

If you have drawn your pistol but no shots were fired, holster your pistol, and get out of the area before something else happens. Call the local police or sheriff’s office and tell them exactly what happened.

Let them know that you have a concealed carry permit or state license and you are concerned about harm done to you. Explain to them that is why you drew your pistol in the first place and you did it in self-defense. Insist on having your information recorded about what happened, and do file to have the other person arrested if possible.

If the law enforcement officials say it’s not necessary, still have it recorded as an official record in the event someone comes in and wants to press charges on you or a witness has a different story than yours.

Always get a copy of the official report for your records. Always make sure the report includes the police or sheriff employee’s name that took the report, the time of the report, and the date it was taken.

Remember you are a law abiding citizen that wants to stay on the right side of the law. You have been authorized by law to carry a weapon for self-defense purposes. If ever you have to draw a weapon, your reason for doing so, was the weapon was drawn in self-defense.

When Can You Draw Your Concealed Carry Handgun?

Generally speaking you may not draw your gun to threaten someone, even though they are threatening you. Legally your hand gun can only be used to save you or another from grave bodily injury or death. Many times a gun was drawn and that ended the threat, but to draw the gun is still required for you and a reasonable person in the same or similar circumstance to believe that the threat of great bodily injury or death was imminent.

Remember, in some ways carrying a gun is a lot like cleaning one or storing it. Always go on the presumption that it is loaded, and that by accident or intent, it can go off and kill whoever happens to be in the way.

When you are calm, you may think your finger will never reach for the trigger, however the bullet in the other person’s body is all the evidence that is needed.

Keep your life simple, and only draw a gun when you feel you or someone else is in imminent danger of losing life, because once you draw the gun, the only thing that is left is to aim it and pull the trigger. Both can happen without thought and due consideration.

If you draw your gun, you may also have essentially backed yourself into a corner and eliminated other options for resolving the situation. The gun is a tool of last resort and if you carry it concealed, you cannot use it to ward off potential threats.

It should only really come out of the holster when the expectation of death is imminent. Real life situations aren’t the same as what you see on TV or what goes on in the fantasies of anti-gunners.  You will be in a stressful situation and must think carefully in order to do what is best and within constraints of the law.

There are a couple of things to think about when you must make up your mind to shoot or not to shoot:

To have a concealed carry permit is a great responsibility. You have to know your state laws concerning this permit and any other state that accepts your permit in their state. Although most states that offer this permit may have very subtle differences in their laws and the laws of other states, it is your responsibility to keep up on the new changes of those laws.

You must always remember that you may only draw and fire your concealed weapon to protect a person or yourself from immediate death or great bodily harm. If your incident does not prove this, then you could be possibly charged with brandishing of firearm or charged with assault with a deadly weapon.

Remember you could always be held legally liable if you did not follow the law to the letter. In some states if you shoot and an innocent bystander get hit, you can be held responsible in a civil lawsuit.  Therefore, not only must you always practice good firearm safety and accuracy, you must also be aware of the situations you find yourself in, as well as what the law says about them.