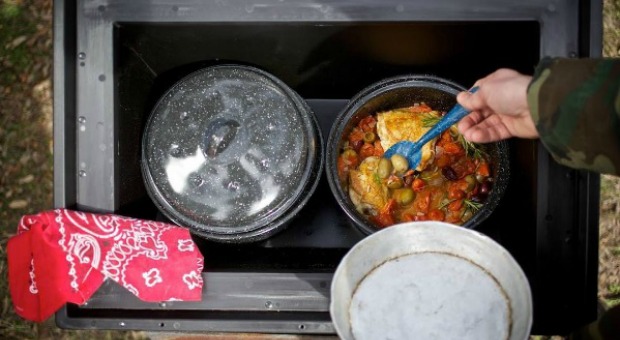 As the popularity of solar power has increased, so have its alternative uses. One of these, is the solar oven. Designed to cook food, the solar oven works something like a crock-pot, slow cooking the food at low temperatures. This makes for tasty, tender meals, with plenty of time for the flavors of the food to combine.

That’s where the Solavore Sport Solar Oven comes in. After reading about my experience with this oven you will want one for yourself. Are you ready?

Solavore Sport Solar Oven is the first solar oven I’ve used, which I can honestly say works better than what I’ve done myself. In fact, it works so much better, that it made me throw away my homemade oven and rethink how a solar oven should be made.

One of the biggest errors I’ve seen made in solar ovens, and yes, I’ve made it myself, is to make the entire thing reflective.

Solar ovens can be broken down into two separate parts, the oven itself and the reflectors. The reflectors obviously need to be reflective, but the oven doesn’t. Rather than try to reflect the sunlight onto the pot, the oven should convert that sunlight to heat, so that it can surround the pot with heat.

This is such a basic design concept that it surprises me more people don’t get it. But then, I didn’t get it myself before Solavore came around. Ovens are supposed to surround the food being cooked with heat, so it only make sense to have the oven box convert the light to heat. Besides, if the box reflects the light, it’s probably not going to reflect it onto the cooking pot anyway.

More than anything, the Solavore Sport is designed to convert sunlight to heat and it does that very well. The oven box itself is lined with flat black-painted aluminum, so that it can convert as much light to heat as possible. But then, it works to hold that heat in. The oven box is insulated (an R-value of 6.5, they say), ensuring that the heat isn’t just lost. The clear lid that the light comes in is double-paned as well, helping to hold heat in from that direction as well.

A key design element, which I’ve never seen in any other solar oven, is that the lid, which appears to be vacuum formed from Plexiglas, has a wide mating area that makes contact with the oven box, all the way around. This eliminates one of the biggest heat loss areas found on most solar ovens, around the edges of the lid.

In fact, the Solavore Sport is so good at generating and holding in heat, that you only need to use the reflectors during the early morning and evening hours, or when the sky is somewhat overcast. The oven itself generate enough heat to cook the food without the reflectors, when it is exposed to direct sunlight.

Do you wonder if Solavore Sport Solar Oven would work during winter days? I did. Since it’s September, and winter is still far away, I can’t test it by myself yet, but here’s a video that I found and I have to share with you:

The people at Solavore have gone all out in this model, using high-quality materials that seem to last. Like the aluminum oven lining, each part and each material seems to be carefully selected to ensure the best possible cooking experience. Everything I’ve tried cooking in the oven has turned out well, no muss, no fuss, just good food.

To ensure that the oven is able to cook the food you want, it comes with two four quart baked enamel dutch ovens for cooking in. The oven is large enough to accommodate both of these at the same time, allowing you to cook two dishes together. It also comes with an oven thermometer, allowing you to know the exact temperature inside your oven at all times. The manufacturers recommend removing the reflectors once the internal temperature reaches 270 – 280 degrees.

They’ve also included a WAPI in the kit, allowing you to use your solar oven for purifying water. The WAPI or “Water Pasteurization Indicator” is a small device which was originally developed for use in third-world countries. With it, one can purify water anywhere they have heat.

Rather than boiling water to purify it, a WAPI allows you to pasteurize it. This means raising the temperature high enough to kill of the microscopic pathogens in the water; the whole purpose of purifying water. By pasteurizing, instead of boiling, a lot of energy can be saved, as the temperature for pasteurization is well below the boiling point of water.

The WAPI consists of a plastic capsule with a wax bead inside. It is floated in the water, with the wax bead up, while it is being heated. When the water reaches a temperature hot enough to melt the wax, the pellet will drop to the bottom of the capsule, indicating that the water is now purified. Once removed from the water, the wax will solidify once again, allowing the WAPI to be used over and over again.

Between the excellent quality and the attention to detail shown by supplying everything you need but the sun, Solavore has created a superior product which will provide anyone with well cooked food, even when the power goes out. Whether you want to save energy or you want a means to cook off-the-grid, the Solavore Sport Solar Oven gives you the option of baking everything from cakes to roasts, with veggies and eggs in between.

As for the price, you’re getting what you’re paying for, and this solar oven appears to be better than other products on the market as well.

Take your off-grid cooking experience to the next level with Solavore Sport Solar Oven and click the banner below to grab the offer!