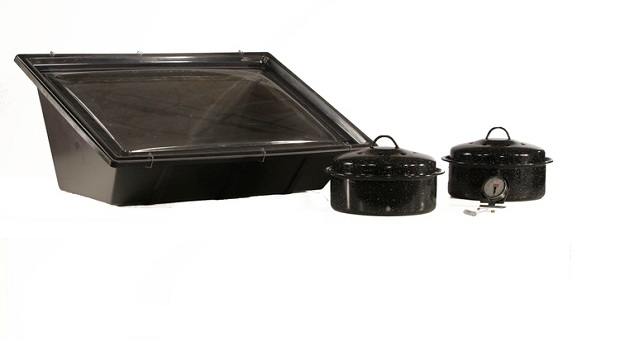 Read This Before Buying a Solar Oven!

Buying a solar oven can be a tricky proposition for most people. It’s not like buying a car or a washing machine, where you can talk to friends and neighbors, getting their opinions and advice.

Few of us know anyone else who has a solar oven, so we’re not going to be able to get a whole lot of useful advice. In fact, if we asked those nameless, faceless friends and neighbors, they’d probably look at us like we were at least a little bit nuts.

That’s why you need to read this article, then grab the great offer we prepared for you!

Let me say something about those reviews. Few people who buy a solar oven have ever used one before to compare it to. So, when Joe Blow gets on his soapbox and praises a particular solar oven he’s bought to the skies or badmouths the manufacturer of it, you really don’t know what he’s comparing that solar oven too. Chances are, he’s comparing it to his gas or electric oven in the house; and that’s not a real fair comparison. The two are nothing alike.

Cooking with a solar oven is more like cooking with a crockpot, rather than cooking in a regular oven. Anyone who tries to compare it to cooking in their home oven is going to be dissatisfied. That could greatly alter whatever review they write about a particular solar oven.

I’ve been playing with solar ovens for a few years now, mostly ones I’ve built myself. While I can’t claim that my experience has made me the world’s number one authority on solar cooking, I can say that I’m not walking into this blind. My many mistakes have taught me a lot about what to look for. And now I’m sharing this knowledge with you.

Before talking about that though, let’s talk about what a solar oven is, so that we can make sure that we’re speaking the same language. An oven, any oven, is a box which surrounds food with heat. As opposed to other cooking methods, this provides a more uniform heating to the food, allowing it to cook all the way around at the same time. 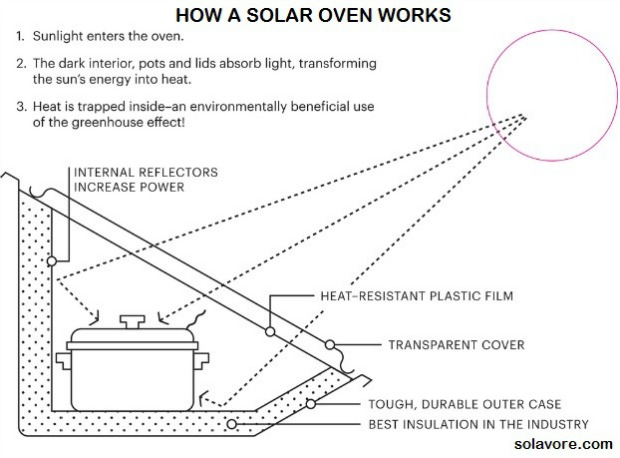 For some things, like baked goods, that’s essential. A loaf of bread which is cooked on the stove isn’t going to rise and if it is allowed to rise before cooking, only the bottom of the loaf will cook. Or, if you leave it on the stove long enough to cook the top, the bottom will be burnt to ashes.

So, a solar oven, like any other oven, must be able to surround the food being prepared with heat. But it gets its power from the sun, which is above us. So that means that somehow the oven must get that heat all the way around the food being cooked, including the bottom. To understand how it does that, we need to talk about passive solar heating a moment.

Passive solar heating is an application of the first law of thermodynamics, that is, the Law of Conservation of Energy. In a nutshell, this law says that energy can’t be lost, it can only be changed to other forms of energy. For passive solar systems, this conversion is changing light energy to heat energy.

In a passive solar home or greenhouse, sunlight enters the “system” through an aperture, the windows. Once inside, it strikes a dark-colored surface, called the absorber. This surface is what turns the light energy into heat energy. The darker the color of the absorber, the better it is able to convert light to heat. That heat is stored in a thermal mass, which is usually rock or concrete, attached to the back side of the absorber. The only other item needed is a something to control the sunlight, blocking it off when heat is not needed. This is normally referred to as the control.

For solar heated homes to work, they need to have a lot of south-facing window area to act as the aperature and be well-insulated. The more sunlight that comes into the home, the more heat it can create. At the same time, a well insulated home will lose heat more slowly, allowing the solar heating system to be more effective.

Applying That to Solar Ovens

Okay, so now let’s apply those lessons to a solar oven. Essentially, a solar oven is the same as a solar powered home, with a few notable exceptions.

The first one is that the solar oven is a whole lot smaller and the second is that it needs to generate more heat, rising to a higher internal temperature than you would ever want your home to. It doesn’t typically have a thermal mass, as the food being cooked acts as the thermal mass. Nor does it have a control, as most people put their solar oven away when they aren’t using it.

The first important part of the solar oven is the aperture. This is the clear glass or plastic cover that’s over the face of the oven. Some people try to get by without this, but that’s a big mistake. If you’re trying to heat up the space inside the oven, you need to keep that heat in. Without a cover the oven will never get hot enough to cook the food placed inside it.

The cover needs to be clear and easy to clean. It would be best if it is double or even triple layered, with air gaps in-between the layers. Like a double or triple paned window, this would give extra insulation value to the aperture, allowing it to hold in more of the heat.

Once the sunlight enters the oven, we need to be concerned about the absorber. This is the entire inside of the oven. Some people try to make the inside reflective, so that it will reflect the light onto the pot containing the food.

But it’s actually a whole lot more effective to have this flat black, so that it will convert the maximum amount of sunlight into heat, rather than reflecting it. The sunlight is already inside the oven, it doesn’t need to be reflected anywhere.

This particular part of the oven is the one which will become the hottest. So it is important that the absorber be made out of a material which can withstand the heat. Aluminum or steel are the best, with aluminum being slightly better than steel. The finish should be flat black, rather than glossy, going back to what I was saying about reflecting.

We want the heat being generated to stay inside the oven, rather than escape. We already discussed how the aperture should be double or triple walled. But that’s just the top. The rest needs to be insulated as well. So it’s important that the oven be double walled, with insulation between the walls. This is one of the biggest areas were people who make their own solar ovens fail, they don’t put in any insulation.

It’s best that the insulation be closed-cell foam (Styrofoam), rather than open-cell. That will prevent it from absorbing water, and yes, there will be a lot of water vapor inside the solar oven to absorb. With it being closed-cell, there’s no reason to worry about sealing the inner walls from moisture. Such sealant could and probably would dry out and crack over time.

Here in the northern hemisphere, the sun is always to our south. So, any solar oven has to have an angled face or cover (the aperture) to allow the sun to enter. There is no perfect angle for this, as the angle depends on the latitude where the oven is going to be used and the time of year. On the average, an angle of about 30 degrees will cover the majority of the country.

The more airtight the solar oven is, the better it can hold in the heat. Any gaps which allow air to enter and leave the oven will carry heat out of the oven as well, reducing the internal heat and prolonging the cooking time. Therefore, the oven needs to be made out of a material that is easy to seal or that naturally seals itself.

This can be a problem, as the worst spot for this is between the cover (aperture) and the body of the oven. A good wide surface area, where the two parts of the oven can come into contact with each other, is needed to ensure good sealing. Latches, to hold down the cover during times of high wind are helpful as well.

Reflectors are panels, normally made of aluminum, highly polished on the inside. They allow additional sunlight to be reflected into the oven, increasing the heat generated. Properly used, they can increase the cooking speed or allow the oven to be used during times when there is not enough sunlight.

Reflectors are not always needed with a solar oven. A lot depends on the cloud cover where the oven is being used. In parts of the country where there is a lot of sunlight, it is possible to cook in a solar oven, without any reflectors at all. The sunlight entering the oven will be sufficient to generate enough heat. But in areas of the country or times of the year, where there is a lot of cloud cover, reflectors are essential for effective cooking.

So, you either want to select a solar oven which has reflectors with it, or which has optional reflectors that you can buy to use with it.

Either way, you know now what to look for when buying a solar oven. Good thing, because we have a great offer for you for a solar oven on a discount – Solavore Sport Solar Oven!  Here’s a video on how this solar oven works:

And here’s our own review on this product! Click the banner below to grab this incredible offer!