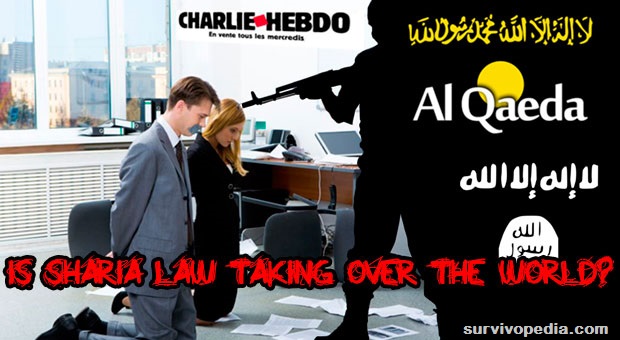 Is Sharia Law Taking Over The World?

In case you haven’t noticed, terrorist attacks have been on the increase. It seems that the various Muslim terrorist organizations are getting bolder and flexing their wings. Perhaps there is some of it that is nothing more than internal competition, with groups like Al Queda upset that ISIS is grabbing most of the limelight; but most likely it’s an increase in the war to take the world over for Allah.

The recent attack on the French publication Charlie Hebdo gives us some real insight into the mind of these terrorists. This attack was clearly a revenge attack, massacring people for making fun of Mohammad.

A branch of Al Queda has taken credit for the attack, stating clearly that their actions were in retaliation for a cartoon that the magazine published, which made fun of the prophet Mohammad. According to them, this is a capital offense.

When Extremism Speaks More Than It Should

Okay, so it’s a capital offense for some of the Muslims, but the people they attacked weren’t Muslim, they were French.

That means their religion is probably something along the lines of “wine, women and food,” definitely not Islam.

Yet the terrorists who attacked them were holding them to the standards of Sharia Law, as if they were Muslims, or at least living in Muslim controlled lands.

This action shows us something of the arrogance of radical Islamist. They are convinced of their right to rule the world and subject it to their rule. It doesn’t matter what country they are in, in the mind of the radical Muslims, the country must bow to their laws while Muslims don’t have to obey the laws of that land.

While all religions want to proselytize and control the people of the world, Islam is the only one which is still using violence anywhere in the world for this purpose. To the extremist Muslims, the attack in France was an act of war; nothing more, nothing less. If nobody stops them, they will continue that war, until they subjugate all the world to Islam.

There are already hundreds of “No Go” zones in France, which are owned and controlled by Muslims. Some of these neighborhoods are self-governing, essentially independent states, which have broken away from French rule and French law, establishing Sharia Law within the areas they control. Any non-Muslims who enter those areas become subject to insults, threats and violence.

You may be thinking that that’s not surprising, as the French are messed up anyway, but the same thing is happening here in the United States. While not as common as in Europe, we have Muslim controlled neighborhoods and even cities, where they suspend the Constitution and all American law, replacing it with Sharia law.

As far as the radical followers of Islam are concerned, they are to continue conquering by whatever means they can, until they make the whole world subject to their law.

In this, they use our laws against us. How many times have you heard cries of “Islamophobia” and “Racism” regarding Islam? It seems that they have taken a page from the liberal playbook and resorted to name calling, twisting political correctness and outright lies to get their way. They have learned how to twist our legal system, taking cases to court to create precedence, allowing them to have their way.

But “their way” requires eliminating the American way. It requires eliminating our Constitution, our Bill of Rights, or freedoms, our freedom of speech and our religions. According to extremist, as far as Islam is concerned, the only right we have is to accept Islam, or be enslaved.

What Are We Doing About It?

Let me get back to France for a moment. On Sunday, January 11th, there was an anti-Muslim march in Paris. Some estimates say that there were as many as a million people who gathered together, including 40 national leaders.

Yet, the supposed leader of the free world was notoriously absent. One European newspaper succulently said to President Obama, “You let the world down.”

It is not surprising that Obama let the world down, as he has supported Islam ever since entering the Oval Office. I remember sitting in South Texas, with a group of 150 pastors, as he told us his “salvation testimony.” It was clearly lies back then and has become even more clearly lies during his tenure in the Oval Office. There have only been a couple of groups that Obama has consistently supported, and Islam is one of them. This is just one more example of that support.

With Obama bowing down to Islam, he has become their enabler. There is evidence that he has provided arms and money, of our tax dollars, to fund and equip the very terrorists who are attacking us and our allies. There is no reason to believe that this won’t continue until the end of Obama’s reign.

There are two big questions facing us now, and no, one of them isn’t whether Obama will do anything about Muslim terrorism. We already know that he won’t. If anything, he will continue to attack conservatives Christians, calling them terrorist.

No, the first question is whether or not France (along with the rest of Europe, which is also overrun with Muslims) will actually do anything about this attack. The second one is how long the average American is going to wait, before we take things into our own hands.

Somehow, I think the only true solution to the radical Muslim problem here in the United States, doesn’t lie with government action. Like the Old West, this is probably going to be a case of the law residing in the individual citizens.

Someday soon, I suspect that the radical Muslims will step over some line and the American conservatives will show them how dangerous that is.