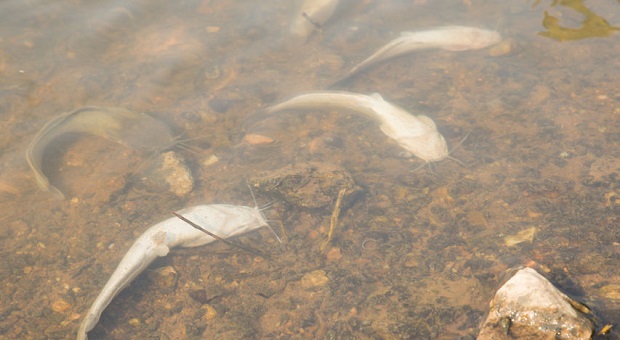 The common misconception about contaminated water is that the contamination comes from people. While pollution is certainly a major contributor, there are several natural sources of water contamination, too. That means that even water that hasn’t been exposed to people may potentially be unsafe. Here are the most common types of natural contaminants found in water.

As water courses over rocks and through the Earth, it picks up minerals. While many of these, such as calcium, magnesium, iron and copper aren’t bad for you in the amounts typically found in water, others can be. Of particular concern is arsenic, mercury, cadmium, lead and fluoride. These can be harmful in even small doses, especially if you’re drinking that water on a regular basis.

When a large animal dies in or very near a water source, the decay process can cause an increase in nitrogen and phosphorus that can trigger other events harmful to humans such as growth of toxic plants. Also, many animals carry diseases or bacteria such as bird flu, rabies and salmonella that can be transmitted via water.

Some plants and algae can contaminate water supplies and cause a host of illnesses. For instance, Cyanobacteria, or blue-green algae, is found in lakes, rivers, ponds and other bodies of water and can produce toxins that can cause rashes if you touch it and cramps, vomiting, sore throat, diarrhea, fever, headache, muscle and joint pain and even nerve or liver damage if you drink it.

Red and brown algae also cause health problems in humans. Though these toxic plants are caused by humans, they now exist in their natural forms in our water supplies and found in areas with increased levels of nitrogen and phosphorus. These algae can kill sea birds, fish, and marine mammals and can be harmful to humans as well.

They also pose a secondary problem; since they kill off fish and other aquatic creatures, their presence creates a dead zone where nothing can live. Though the plants eventually die off, if there are no fish to repopulate the water then the water remains a dead zone.

We’ve all heard of the bubonic plague, rabies, West Nile encephalitis, Giardia and Legionnaire’s disease. Did you know, though, that you can catch them through contaminated water? Well, you can. If the animal is infected and voids in the water, that water is now contaminated with the disease. E. Coli, cryptosporidium, listeriosis and salmonella can also be spread through the water.

Though the odds of catching most of these diseases from water is slight, it does exist and would be a major source of widespread disaster, especially in the cases of plague or rabies, should even one person catch in in a post-disaster situation where medical facilities are limited or non-existent.

Ammonia found in urine and feces is also an issue; it can cause an increase in algae bloom that can cause fish to die and creates dead zones. Ammonia can be carried through the air for more than 300 miles before being deposited into water supplies.

Turbidity refers to the clarity of water. This is important because many viruses, parasites and bacteria are killed by the UV rays in water. If, however, the water is cloudy, the sun can’t get through the water to kill these hazards. High turbidity levels are often associated with high levels of microorganisms that can cause disease.

Turbidity can be naturally caused by storms and other disturbances that keep the water stirred up. Don’t drink water that isn’t clear unless you’re using some form of water purification such as tablets, liquid or boiling because it’s not safe to drink just by using UV light.

Common natural occurrences such as landslides and volcanic eruptions can cause serious issues in water quality in a number of ways. Landslides kill animals and the decomposing bodies can cause the issues discussed above. They also cause turbidity and can dump a large amount of minerals into the water at once.

Volcanoes cause pollution in a couple of different ways. First, the ash causes high turbidity, which can cause temporarily increase the growth of bacteria and other contaminants in the water. It can also temporarily lower the pH of the water, making it more acidic.

Though a small eruption probably won’t have an effect on the water quality for more than a few days, a large eruption such as the one that could occur if the SuperVolcano in the Midwest should erupt could have catastrophic consequences on the water supply.

Forest fires can cause the same type of disruption in water quality as both landslides and volcanoes, though you don’t typically see an increase in the acidity. Burning vegetation releases chemicals and minerals in plants such as nitrates, ammonia and phosphates. At high levels, this can be toxic to fish and other aquatic animals. Nitrate is especially concerning because it’s carried downstream and into the water supply.

Other concerns associated with forest fires are increased turbidity and the introduction of heavy metals and radionuclides from the ash and soils from the local geography. Diseases and bacteria from dead animals get in the water, too. You also have to remember that firefighters go in and spray with chemical fire retardants, so that ends up in the water as well.

As you can see, water contamination doesn’t just come from people. Even the “cleanest” water can still be contaminated by that dead deer just up the stream or from the landslide that took place right around the bend. Don’t ever assume that water is safe to drink just because you’re away from humanity and it looks clean.

Always take a means of purifying your water before you drink it because even though diseases and illnesses are rare, you’ll really be second-guessing your decision if you are unlucky enough to get sick.

Fortunately, there are several different ways that you can avoid most of these conditions. Carry your own water or pack some water purification tabs. There are water bottles that purify water as well as straws that allow you to drink straight from the stream. If push comes to shove, boil the water before you drink it. It’s just not worth getting sick over.

Can you think of any other naturally-occurring pollutants? If so, let us know about them in the comments section below!