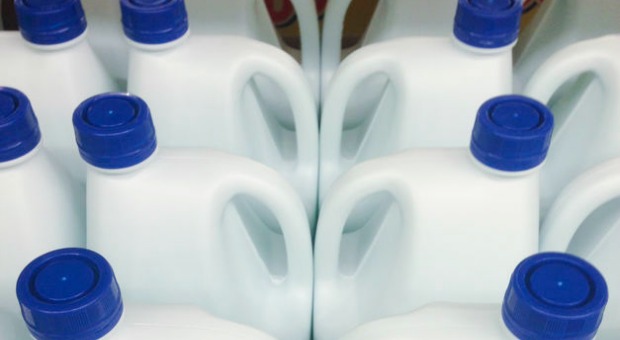 5 Things To Know About Bleach Storage

We’ve recently had a question from a reader about bleach storage.

She lives in a warm area of the US and had a problem with leakage that ruined some of her other preps.

Starting from this question, today we’re going to take a look at proper storage of bleach as well as discuss some viable options for it that will suit your needs at least as well as bleach.

Why is Bleach Important?

Though many people think short-term of looters and thieves, one of the biggest risks to your survival when SHTF will be disease.

Because there may no longer be public water sanitation systems, water supplies may become contaminated. People won’t understand the need to keep waste away from water.

Another reason disease will be an issue is because of poor sanitation. Somebody with cholera will leave the bacteria behind and you may touch whatever is contaminated.

If you become contaminated, you’ll then have cholera. Those of us in the know and prepared won’t have as much of a problem, but the largest portion of society may not fall into that category.

Bleach kills 99 percent of disease-causing germs and you only need to have it in a ratio of one part bleach to ten parts water to create a cleaning solution that will kill germs.

You can also use bleach to sanitize your drinking water. For that, you use 8 drops of bleach per gallon of clear water and 16 drops for cloudy water.

You’ll also need to learn how to bathe without using contaminated water too, because some germs can permeate your skin while others will get to you when you lick your lips or get some in your eyes. It’s not OK to bathe in bad water. It’s better to not use water at all if you don’t have clean water.

However, you have other alternatives for sanitizing water that we’ll get to in a bit.

5 Things to Know about How to Store Bleach

First, it’s important to understand that bleach expires. When you buy it, use a black sharpie to write the date.

It’s a good idea to also write 8 drops/1 gallon because in an emergency situation, your brain may not be able to pull up all of the numbers you need. If you really want to be prepared, tape a plastic eye dropper to the jug, then when the bleach comes up in your rotation, just remove the eye dropper and tape it to the next new jug of bleach that you buy.

The best way to store bleach is in a cool, dry area away from direct sunlight. Because the containers can sometimes be a bit fragile, you may want to store them on a piece of old linoleum, and keep them out of the way so that the bottles aren’t inadvertently kicked or knocked off the shelves.

It’s my guess that this is what happened to our reader’s bottles because they don’t generally degrade.

Just as with all of your prepping supplies, use the first-in-first-out rotation so that you’re always using the oldest product, and when it reaches its 6-month date, you don’t necessarily have to throw it out. You can still use it in the laundry, and if SHTF, as long as it’s not more than a couple years old, you can still use it to fight odors and germs in waste areas or to kill bugs in the garden.

The reason that it stays good for that is because when bleach breaks down, it turns into salt and water. Even if it’s completely degraded, salt still inhibits many bugs and kills others.

Because of its short shelf life, bleach isn’t the ideal stockpiling item because it’s not like spaghetti sauce – you may only use a gallon every few months in everyday life.

Though it’s definitely good to keep around, there are other safer, space-saving options with almost indefinite shelf lives that you can stockpile for water purification.

Note: If you’re storing ammonia for any reason, keep it well away from the bleach. Should a spill happen, you’re looking at toxic gas formation, or even, if enough ammonia is present, an explosive product. It’s a bad idea to blow up your laundry room.

Bleach can absolutely be used for water purification, but it’s not your best option. We’ve already discussed the issue of short shelf-life, but it’s also not good for you to drink bleach. Yes, if you’re drinking city water, it’s chlorinated, but the maximum amount of chlorine is 4 ppm. That’s a heck of a lot less than 8 drops per gallon. Make sure that your bleach is unscented!

Another reason why you should only use bleach to disinfect your water is that when sodium hypochlorite (bleach) mixes with the organic contaminants in the water, it causes them to oxidize, which create carcinogenic trihalomethanes.

Boiling is the best option, but if all you have is bleach, then using it is better than drinking contaminated water by a long shot.

Because you have no idea what may be in a pond or a stream after an event, it’s a good idea to have your own water collection and storage systems in place. There are even natural contaminants that can make you sick. That will give you a leg up on your water sanitization needs. We have a few good DIY water collection/filtration ideas here.

OK, so we’ve determined that bleach may not be the most viable option for long-term storage, so what DOES work? You have a couple of options.

Steramine tablets – are often used in restaurants, daycares and other places that need to sanitize hard surfaces. One tablet sterilizes 1 gallon of water and there’s 150 tablets in a bottle. A case of them on Amazon is about 30 dollars. So, that’s pretty cheap. You can’t use it for drinking water sanitization, though.

Portable filters – for portable water sanitization, there are several different types of portable filters that you can buy (LifeStraw is one example), and you can also carry drinking water sanitization tablets. They’re a bit pricey compared to some other options, but then again, anything “convenient” usually is. The cheapest ones I found on Amazon were about 17 bucks for 100 tablets.

Calcium hypochlorite aka pool shock – this is my favorite drinking water sanitization method. It comes in dry granules and has a shelf-life of 10+ years. The best part? It’s SUPER concentrated – one 1 lb. bag treats 10,000 gallons of water – and it’s just as effective as household bleach for both sanitizing drinking water and sanitization of surfaces.

I wrote an article awhile back that explains how to use pool shock. Oh, and did I mention that you can buy that 1 lb. bag for about 12 bucks? Doesn’t get any cheaper than that. I’m not much on math, but off the top of my head, that’s like 1/10 of a cent per gallon of drinking water. That’s about as close to free as you can get.

Well, we veered a bit away from the original question about how to store bleach in hot climates, but I think that the best answer is, “You don’t have to store bleach at all because there are better alternatives.”

I hope that this information was enough to solve the problem. If any of you have more or better ideas, please share them with us in the comments section below.