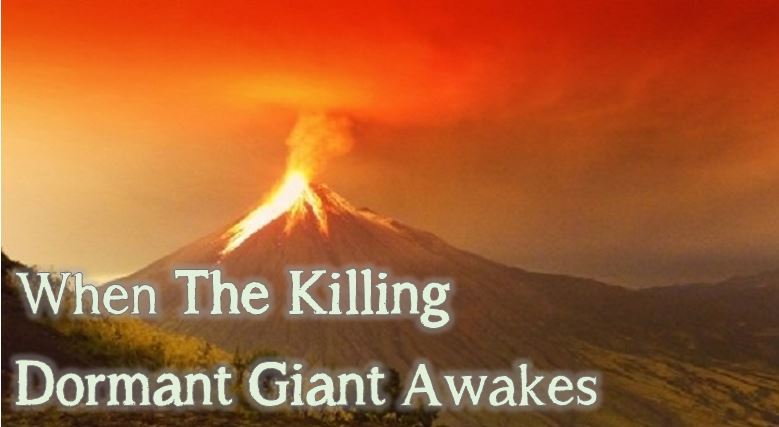 When The Killing Dormant Giant Awakes (1)

Much ado has been made in recent years about the active supervolcano that resides underneath Yellowstone National Park in Wyoming but should we be prepping for it?

Is the killing dormant giant really sleeping? Is a cataclysmic supereruption possible or even probable in the near future? For that matter, is a volcanic eruption all that we should be concerned about?

If leaving aside Yellowstone, how many of us are prepared to survive a volcanic eruption?

The Yellowstone Supervolcano is located beneath the Yellowstone Caldera in the northwest corner of Wyoming. A caldera is simply a depression left in the earth from the eruption of a volcano. Think of it as a sinkhole; when the magma erupts from the earth, the land is going to sink because there’s nothing left underneath to hold it up.

The size of the caldera is huge – it measures about 45 miles by 34 miles. The size of the actual magma cove that currently lies a few miles underneath the Yellowstone Plateau is about 2.5 times as big as scientists had previously thought. It’s about 50 miles long and about 12 miles wide and the mass fills about 960 cubic miles underneath the earth. In other words, it’s long, wide and deep.

The location of the cove isn’t stationary but that’s not because the cove itself moves; the North American Plate lies about it and moves west southwest over the hotspot. This movement is so slow that it’s irrelevant to our concerns except as a means to track its historical activity.

Only about 6-8% of the magma cove is molten rock but that’s still a lot of lava! Scientists say that this proportion of lava is much too low to cause another supereruption soon, but that’s not all that we should be concerned about. 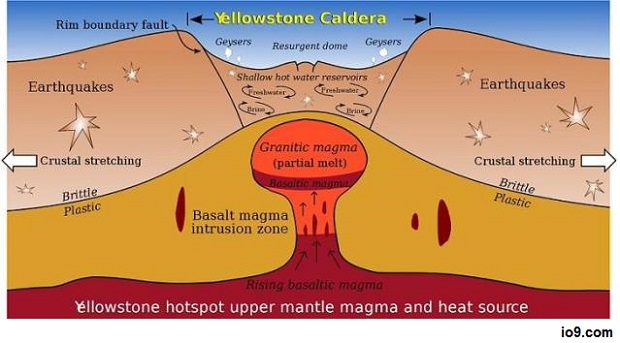 Is the Giant Really Sleeping?

Though there have only been 3 major supereruptions in the history of the volcano, it’s always active to some degree. It’s the source of the geysers in the park and also creates more than 1000 earthquakes per year, most of which are under magnitude 3.0, which is the level at which we can actually feel them. Still, they’re a regular occurrence.

The first supereruption of the Yellowstone Volcano in its current location was the biggest and happened about 2.1 million years ago. It formed the Island Park Caldera and the Huckleberry Ridge Tuff, and produced 2500 times the amount of ash that the most recent Mount St. Helens eruption did!

{adinserter usf}The second supereruption occurred 1.3 million years ago and created the Henry’s Fork Caldera and the Mesa Falls Tuff, and was the smallest of the three. The third, and second largest, eruption happened 640,000 years ago, and formed the Yellowstone Caldera as well as the Lava Creek Tuff. It ejected 240 cubic miles of dust, rock and ash into the air.

In addition to the three supereruptions, there was another eruption about 174,000 years ago that created West Thumb Lake in the park.

The Yellowstone hotspot is ancient, though. Remember that the North American Plate shifts over it so the activity in Yellowstone isn’t the only place that it’s been active. The first caldera attributed to the hotspot is in southwest Central Yukon in Canada and is thought to be about 70 million years old.

The trail of calderas and overlapping volcanic fields attributed to the Yellowstone hotspot extends from there through the Nevada/Oregon border, the Snake River and finally to the current location in Yellowstone. It’s not a recent development for sure and not likely to go away soon.

There are several ways that scientists monitor the Yellowstone Volcano: they look at geyser activity, earthquakes and also the rise and fall of the terrain of Yellowstone Plateau. As the magma in the cove changes pressure, the land actually rises or sinks.

This change is typically fairly regular, with an average rise of about 0.6 inches per year, nut between 2004 and 2008, though, it rose nearly 3 inches each year. As a matter of fact, it increased by a whopping 8 inches at the White Lake GPS station. This surge in rise decreased by late 2009 according to the US Geological Survey and has since returned to “normal”.

What was it all about though? Was the volcano issuing a warning or was it just a fluke or a one-time thing?

According to scientists, it wasn’t necessarily a sign of anything but the statement that they issued from the Yellowstone Volcano Observatory wasn’t particularly comforting. They “see no evidence that another such cataclysmic eruption will occur at Yellowstone in the foreseeable future. Recurrence intervals of these events are neither regular nor predictable.”