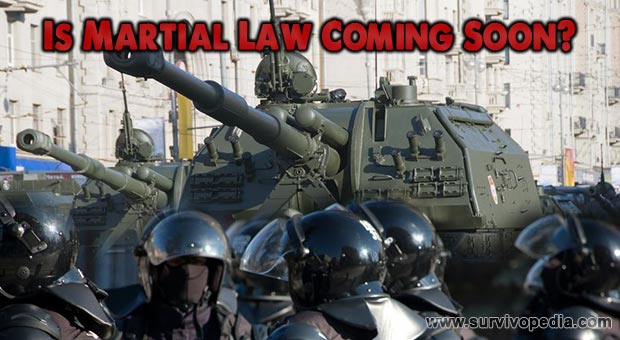 A number of recent events have given rise to the question of whether the United States is heading towards martial law, sometime in the near future. We are seeing an increased militarization of police forces across the land, as well as more and more police excesses, as those militarized forces flex their muscles in the direction of the citizens they are supposedly sworn to protect.

The Bundy ranch is only the most recent of these excesses. Probably the most infamous of them is the way that police forces dealt with the Boston Marathon Bombing. In the aftermath of that atrocity, police instituted what was essentially martial law on their own authority.

Citizens were forced to remain in their homes until police showed up. As the police reached each home in their house-to-house search, they would kick the family out and make them stand on the street. They also confiscated firearms, even those that were legally owned.

None of this did a thing to help capture the bombers, who were eventually captured due to an alert citizen calling the police and telling them that they saw someone who looked like one of the bombers hiding in their neighbor’s backyard. This raised the question; were the police justified in their actions?

Technically, the police acted within the confines of the law. Recent changes to the law allow police and federal agents much more latitude in how they deal with the citizenry. In a sense, they are no longer responsible to the people who pay their salaries; rather serving the “higher cause” of the “greater good.”

In other words, if they can state they are acting to protect society at large, then they can get away with a lot.

This doesn’t necessarily mean that all police and all federal agents have become bad guys or even that they’re comfortable with some of the things that they are doing. One of the things that came out of the Bundy ranch was that some of the federal agents on site stated that they were uncomfortable with what they had been ordered to do, but they had to do it or lose their jobs.

So, where are we going with all this? It appears rather clear that we are heading in the direction of becoming a police state. Honest citizens are being villainized and named as terrorists, while true criminals and terrorists are being left alone, so that the police aren’t accused of being “racist.”

The Long Arm of Politics

The big question actually boils down to one of politics. While the country may be approaching that of being a police state, that doesn’t mean that martial law is in effect or will be in effect. Theoretically, martial law is only declared by the military, when government organs are no longer able to meet their requirements to take care of the people.

That’s the type of situation we might soon find ourselves in. It is clear that the ongoing events in Nevada have captured the attention of the highest political offices in the land, even though they have been strangely quiet about it. American patriots are sending a clear signal to Washington; one that we will only be pushed so far. That strikes fear in the hearts of the politicians, especially liberal ones.

President Obama has already signed the executive order which gives him the right to declare martial law at any time. I think that’s a significant sign. If he didn’t think that there would be a reason for him to need that authority, why would he have given it to himself?

Let me add something else into the mix here. In just a few short months, we have the 2014 midterm elections. Pundits are already predicting a landslide victory for the Republican party, with Democrats losing seats in both the House and the Senate. Should that happen, it would put President Obama in a very dangerous situation. For the first time in his presidency, he would be faced with a senate that is opposed to him.

There are several possible outcomes to the Democrats losing control of the Senate. The first and most obvious is that Congress would do everything in its power to put a stop to the president’s socialist agenda. As part of that, there’s a very strong possibility that they would start impeachment proceedings.

Once Obama is impeached, there’s a possibility that he will also be tried as a traitor to the United States of America. Many people have been speaking out about this, including some on the halls of government. Obama the narcissist can’t afford to let that happen. Being convicted of treason would not only stop his liberal agenda, but would also put him in jail for the rest of his life.

I’m not sure which would be worse for him. While nobody wants to go to jail, he may actually be more focused on his agenda. After all, he is firmly convinced that he and only he can lead this country in the direction that he feels it needs to go. It doesn’t matter to him how many people oppose his ideas; he has his pen and his phone and he intends to use them to the max. But if he is impeached and tried for treason, he won’t be able to use either of them.

The only way out that Obama has is to declare martial law, either before the elections or before those newly elected Congressmen can take office. That would leave him even more firmly in control than he is now, as he would be able to suspend the Constitution, as well as the Bill of Rights.

Obama has relieved almost 200 top commanders in our military forces, in an effort to make the country’s military loyal to him and his liberal vision for America. He has quietly asked members of the military to swear a personal oath of loyalty to him. In addition, he has emasculated the military, giving control to minorities which — just as in the rest of society — are receiving preferential treatment in our armed forces, while true heroes are being stripped of their rights.

Why is that so? Don’t we have a military to protect us from foreign threats? If so, then what do we need the DHS for? Even worse, why do they need to be equipped like the military?

The Constitution denies the military the right to operate on U.S. soil. So, if Obama is going to declare martial law, he needs a military force that he can use, which is not part of the normal military establishment. That’s what the DHS gives him. It is quite possibly the military that he intends to use, in order to establish his version of martial law.

It appears that Obama is keeping an ace up his sleeve; the ace of declaring martial law. When and if that happens, there are only two possible options. Either we all buckle under and accept our new Marxist dictator or we will need to rise up and declare the second American revolution.

The question we need to ask ourselves is; which will it be? 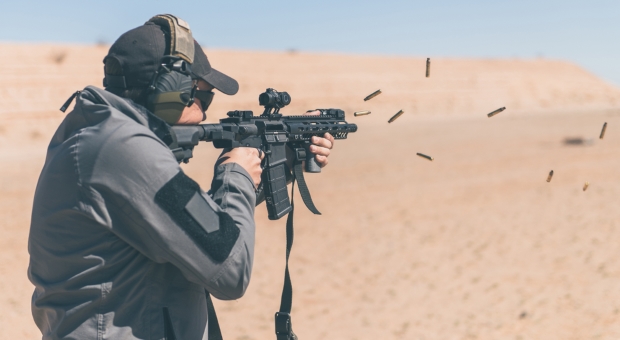