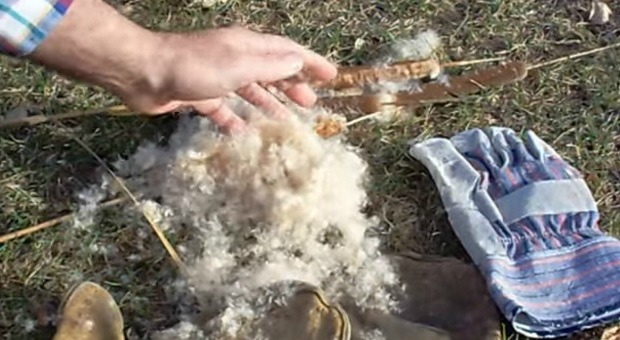 Cattail can be best described as the swamp supermarket of preppers, and I am being very serious about my statement. Actually, the legend says that the US was on the verge of winning War World 2 with a little help from the humble cattail.

And if you’re wondering what on God’s green’s earth I am talking about, let me give you one flabbergasting fact: cattail produces more edible starch than almost any green plant (starch per acre that is). From this point of view, cattail is more nutritious than rice, potatoes, yams, or taros.

And speaking of War World 2, the US gummint’ was on the verge of feeding GI Joes with starch originated from the cattail plant right before the war ended.

The only plant that’s capable of beating cattails in terms of carbs (starch is the essential carbohydrate) per acre is lichen, but that’s not a green plant. However, an acre of cattails will produce, on average, 6.5K pounds of flour annually.

Are you starting to get the picture? Cattails, food, survival, the end.

Well, that’s just one small step in our journey aimed at discovering the survival uses of cattail. Truth be told, there’s so much to know about this miraculous plant that I could write a book.

To begin with, there are 2 species of cattail to be found in North America: Typhalatifolia and Typhaangustifolia. However, the cattail got its name from its mature brown cylindrical flower spike.

The dried spikes make for excellent torches while the end-of-season fluffy cattails are the ideal tinder. American Indian folk used cattails for building mattresses, for insulation, and for absorption.

Cattails are so great from a prepper’s point of view that if you’re  lost out there in the wild and you managed to get some “tail”, you’ve basically covered four out of five essential survival items: food, water, shelter and fuel for making a fire (the dried stalks are a great source of heating fuel).

It’s important to point out that cattails grow near the water, and regardless where the water flows, you’ll find civilization downstream everywhere in the world.

There’s an old survivalist motto that goes something like this: You name your problem and we’ll improvise a solution from cattails.

As I already told you in the preamble, cattails are very close to a prepper’s seven eleven, the store that never closes out there in the wild.

The fresh (they look like cob) tips of cattail are edible and the same story goes for the white bottom of the stalk, the rootlets off the main roots (they look like spaghetti) and the spurs off the roots. These parts are also rich in vitamin A, B and C, together with essential minerals like phosphorus and magnesium.

The pollen from cattails was used as flour for thousands of years. Eastern Indians were known for their heavy use of cattails, not only for their nutritional value (which is great), but for stuffing and hemp. The fluff was very useful for menstruation and for making diapers.

Discover the survival things the Pioneers took with them when they traveled for months!

Cattails are excellent for their starch content. Here’s a video depicting how to get the starch out of a cattail root. And if you’re wondering why, well, once you got the starch out, it would make for the essential ingredient in your survival kitchen, just like any other flour.

However, remember not to eat the fiber, you’ll end up with stomach ache.

Here’s a video about how to cook and eat cattails.

You can even make pickled cattails! Here  is how.

So, with the food part taken care of, let’s move on to other uses for cattails, shall we?

Now, let’s see about the cigar-shaped  cattail seed head, which contains myriads of seeds. When ripe, you can use these seeds as tinder, as they’re dried and highly combustible.

I bet you did not know that if you soak it up right in fat or animal oil, a cattail will burn for up to 6 hours (this is fire transportation by any metric).

Here is how to start a fire with cattail using hand drill fire.

The same seed hairs are incredibly fluffy and soft and if the force is strong in you i.e. if you can gather enough seeds, you can stuff them in pillows. Obviously, if you’re incredibly industrious, you may end up with a mattress made out of cattail seed hairs.

The fluffy cattail seeds make for excellent insulation which can be used to line the inside of clothing or your DIY shoes (think moccasins).

Early civilizations used the seeds for diapers, headgear, bedding, and cushions for cradleboards.

Here’s a tutorial about how to insulate mittens using cattails.

Considering their length and the fact that they’re  pretty straight, the cattail stalks are excellent for making arrow shafts. Seeing is believing, so check out this tutorial.

All you have to do is to remove excess leaves and allow the stalks to dry out thoroughly in the sun. When they turn brown, that means they’re sturdy enough and they can be transformed into a veritable plethora of arrows.

The leaves can be used for making cordage, due to their broadness/thickness; i.e. you’ll never run out of survival rope (and arrows because cattails are abundant). Check out how to make cattail cordage by clicking here.

Obviously, you can also use cattail leaves for making baskets if you’re skilled and patient enough. Check out the tutorial.

You can build yourself a shelter from cattails – a teepee-like structure built from freshly uprooted plants. Here’s the video, check it out.

And you can even heat it with hot stones!

When it comes to medicinal uses, you’ll have to burn cattails and treat abrasions and wounds with the ashes, which have antiseptic properties. The lower part of the stems is rich in amber, a honey-like syrup which is great for treating toothaches and small wounds.

Insect bites, burns and scratches  can be mitigated with a poultice made from the mashed core of the root, while cattail’s young flowers treat diarrhea when eaten.

That concludes today’s epic journey into cattail universe. But there are many other survival secrets that helped our forefathers survive during harsh times.