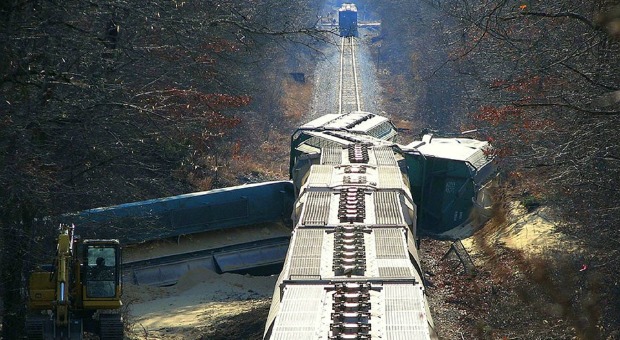 This Is How To Survive A Train Accident 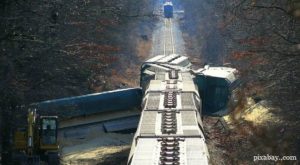 In one of my recent articles, I talked about surviving an airplane crash. Today we’ll contemplate another catastrophic scenario: how to survive a train accident. I know, it’s holiday season, so let be happy and all that, but better safe than sorry, right? After all, what’s happier than being alive?

The thing is, airplane crashes are a rare occurrence and most of them are not as horrible as one may think, i.e. the survival rate is pretty high. The same is true with train accidents; I mean, they don’t happen very often and the number of casualties is relatively low, all things considered. Now, if you enjoy traveling by train, you’ll have to pay attention to today’s article, as I’ll share with you a number of tips and tricks that may save your life in a rail accident.

With regard to train accidents, there are basically two main things that can go wrong: a head on collision with another train (the worst case scenario), or a collision with a vehicle (truck, SUV etc) in level crossings or derailments.

I know that you’re thinking that trains are safe and all that and I agree with you. However, it’s common sense to maximize your chances of not only surviving, but getting back home in one piece.

To begin with, there’s a lot of debate among rail transportation experts when it comes to what passengers should do in order to survive a train accident. If you’re paying attention to the news, you’ve probably noticed the recent derailments and crashes, especially those involving New Jersey Transit and MTA trains. They’ve been pretty shocking for commuters (and residents alike) in New Jersey and New York.

Here are some facts for your viewing pleasure:

Just to recall a few recent high-profile rail accidents, in February, 2016, 6 casualties were recorded and 15 were seriously injured when an MTA train hit an SUV in the Westchester hamlet of Valhalla, on the Metro-North tracks.

Then there was the Amtrak incident in April, 2016, when a train traveling to Georgia from New York through Philly killed 2 and injured scores more. Finally, there was the one that occurred in September of 2016, when 108 passengers were injured and one died when a NJ Transit train crashed at Hoboken. Three in the same year, though that’s an anomaly at least for passenger trains.

Judging from Federal Rail Administration statistics, in 2014, there were 1700+ train incidents, including almost 150 collisions (most with other vehicles), and 1200 derailments, but the vast majority of the crashes involved freight trains. Between 2011 and 2014 there were only four (4) fatalities from train crashes anywhere in the US.

In other words, your odds of dying in a train crash in the US are statistically less than your odds of drowning or getting bitten by a shark (about 1 in 19 million, actually). Now, let’s see about some tips and tricks for maximizing your chances of not only survival, but also for reducing the odds of getting injured in the improbable eventuality of a train crash.

Just like with airplanes, despite what the Federal transportation authority claims, not all seats inside a plane/train are created equal. Everything in life is about location; hence one’s location (as in where you sit) can really make a difference in the eventuality of a train crash.

The general rule of thumb when picking a seat on a train is to head for the middle section. If you want to pick the safest spot to sit on a train, disregard what the talking heads on TV are telling you as well as the so-called expert advice; you must go straight to the data, i.e. reports/statistics from federal agencies, the same folks that set the safety standards for both plane and rail companies.

The first thing to take into account: head on collisions are very rare. You should worry about derailments, as a train is 9x more likely to derail at some point during a trip than to slam into another vehicle or train head on. The data was scooped from the Federal Railroad Administration database, and this fact should be enough to change your “seat-choosing” patterns.  According to various studies, in case of a train-derailment, the cars toward the middle of the train are the less likely to tumble off the rails. The same studies revealed that the first to go off track is the lead locomotive/the first vehicle/car, but that’s hardly a surprise.

Bottom line, the sweet spot when choosing a seat is in a car 1 or 2 back from the center of the train.

The next thing to remember when traveling by rail is to not linger in the Café Car. This is not a safe place to be in the eventuality of an accident, whether we’re talking about a derailment or a collision. While the undeniable benefits offered by the Café Car such as overpriced beer and nuked hot-dogs may lure some of my readers, the reality is that you’re better off to eat, swig, and run. The fixed tables and other pieces of furniture will transform in veritable weapons of mass destruction if SHTF and a train experiences a harsh impact or has to suddenly break prior to an accident.

Tables were the main culprits in many crashes, being responsible for countless internal injuries and the Federal Rail Agency is currently redesigning them for improved crash safety. They are contemplating using air bags (yeah, you read that right) for the tables and also crushable edges, the same tricks used in the automotive industry.

A “mainstream” idea pedaled by so-called safety experts is to choose a rear-facing seat. The concept is that a rear-facing seat will prevent you from being thrown forward (in the absence of a seat belt) during a collision. While this may sound like common sense when it comes to a head-on collision, just like all cute but wrong theories, the reality is that side impacts are far more common than rear-end or head-on ones.

Data scooped from the US Department of Transportation d-base shows that side collisions outnumber rear-end/head-on ones by a factor of 9 to 1 (especially on commuter trains), so forget about the nice view and go sit in an aisle seat. And to play it 100% safe, make it rear facing, just to be sure. Bottom line, the safest place to sit is in an aisle  seat, rear-facing, towards the back of the train.

Obviously, in case of an emergency, you should pay attention to PA announcements and follow the instructions to the letter. These guys are trained for SHTF scenarios, especially the train conductor.

If the circumstances really call for it, one should contemplate jumping off the train prior to a catastrophic crash. While this is very dangerous, you should be prepared for the worst case scenario. Try to do this at the end of the last car. If that’s not an option, jump from the door (if you can open it) or from the space between cars.

You can protect your head by using a blanket or something similar (you can secure some padding around your melon with your belt) and the same goes for your elbows, knees and hips. Before you jump, try to pick a landing spot free of trees, rocks, bushes, or  anything that may injure you during the big tumble.

Don’t try to land on your feet because it’s almost impossible to keep your balance, especially at high speeds; get as low to the floor as possible before you jump by bending your knees so you can leap-frog away from the car and jump at a ninety degrees angle away from the train, thus avoiding rolling towards the tracks, and cover your head with your arms while rolling like a log as you land. Keep your body straight so you will absorb the impact over the widest area possible.

Now, following a train crash, provided you’re still inside the car and the train comes to a full stop, don’t linger inside, but go for the nearest emergency exit/window ASAP.

It would be advisable to get accustomed to the emergency procedures prior to an eventual accident. Just like with everything in life, plan ahead, be aware of the situation and the nearest exits, and also try to visualize how to get there.

Will you be able to protect your own in a life or death scenario?

If you have questions or comments, feel free to use the dedicated section below.