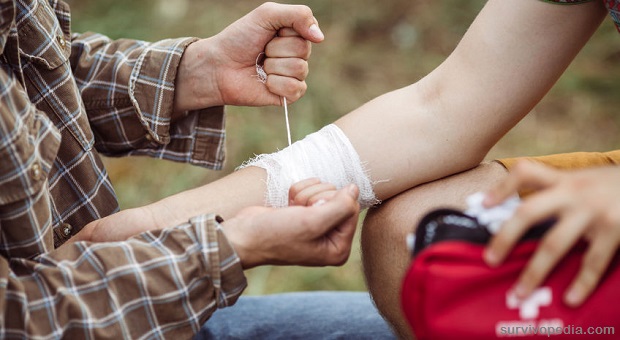 Hazardous Or Harmless? The Mistakes That Could Kill You

We all know and expect that there will be massive shortages in the aftermath of any disaster, that’s why we stockpile. Our stockpile is our safety net, intended to get us through the bad times. Hopefully, it will last us until things get back to some semblance of normal or until a new normal can take over.

But what are we going to do if our stockpile doesn’t last long enough? I’m not talking about food here, enough people talk about that; I’m talking about other things. Things where we may have to substitute one thing for another. Are we ready to do that?

Do we know the things which are safe to substitute for others? Or are we likely to use something dangerous, just because we don’t know any better?

To be honest, it’s probably impossible to know every possible substitution there is. I’m sure that I don’t know them all. But it is a good idea to know at least some substitutions for commonly needed items. It’s also useful to know recipes which can be used to make some commonly used items that might run out.

While this guide won’t be complete, I want to take a look at some common items and what substitutes we can safely make, as well as some of the risks we face in making the wrong substitutes.

Okay, there is no true substitute for water; you’ve got to have it. But how do you know if water is safe to drink or not? The basic rule of thumb is that you don’t consider any water safe to drink in a survival situation. The microscopic pathogens in the water are too small to see, so there’s no way of telling if water is good or not, just by looking at it.

Some people have talked about making filters for water out of rolls of toilet paper or tampons. This is extremely hazardous. These materials can’t filter out bacteria and protozoa, because of their small size.

Some might be caught in the fibers of the toilet paper, but more will get through. The same goes for bio-filters made in a two liter soda bottle. While a bio-filter works extremely well, that isn’t a big enough filter to capture everything.

One of the easiest ways of ensuring that water is safe to drink is with normal household bleach. Eight drops of bleach per gallon will purify it. Just mix it in and allow it to sit for 20 minutes. Bleach is chlorine, which is the same chemical that city water authorities use to purify water.

You can also purify water with heat. Most people boil it, but you really only need to get it up to 158oF to purify it. At that temperature, the pathogens all die, leaving you with water that’s safe to drink, regardless of how it might look.

About the only natural water that you can count on being safe to drink is rainwater. But that’s only if you can capture it in a rainwater capture system that you know hasn’t been used as a latrine by the birds. Don’t trust water that has fallen on your roof, as you can be sure that the local bird population has visited there. 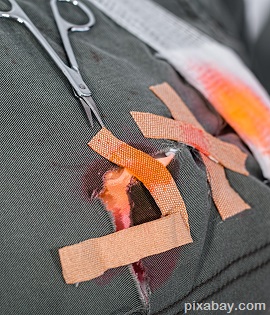 Few people stock enough first-aid supplies, so this is one area where just about everyone is going to run out. The chances of injury during a survival situation are higher than they are at other times, so we’ll go through what supplies we do have faster than normal. So this is one area where we will need to be ready to make some substitutions.

If you don’t, then use fresh urine. While that may sound gross, urine is biologically clean; it contains no active bacteria, protozoa or viruses. So, it can be used to clean out a wound safely.

Of course, alcohol can be used for cleaning the wound as well. For centuries, people have used wine, whiskey and any other alcoholic beverage, in place of rubbing alcohol.

If you don’t have any antibiotic cream to put on the wound, use crushed garlic. Garlic is a powerful natural antibiotic and antifungal, and most people have it. Garlic powder will work as well, although garlic salt is not a good idea, as it will sting greatly.

As for bandages, almost anything will work. In olden times, they took scrap cloth and boiled it to sterilize it. That still works today, as boiling kills those microscopic pathogens we’re concerned about. For that matter, if you have to sew up the wound, you can use a normal needle and thread, as long as it has been boiled.

We are surrounded by plants, many of which can be perfectly fine to eat. The problem is identifying which ones can be eaten and which ones can’t. However, there is an actual procedure which can be used for determining which plants are safe to eat. It requires one member of your party being willing to try the plant and is time consuming, so you want to make sure you do it with plants that you have a lot of.

Before trying this test, one should abstain from eating or drinking anything but purified water for eight hours. That will help isolate any symptoms, proving that they came from the plants being tested. Nothing but those plants should be eaten during the testing process.

The same test would need to be done for each part of the plant, as well as for other plants that you are considering eating. Once done though, you can add that plant part to your list of known safe plants to eat.

Of course, you can save yourself a lot of time by having a guide to edible plants for your region. The plants that are in the guide will be plants that others have tested, saving you both the time and the risk of doing it yourself. 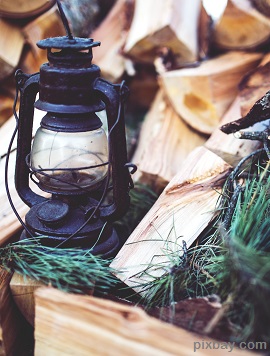 Most of us collect tactical flashlights for emergency lighting; they’re great. We probably have some candles sitting around as well. But one of the best forms of emergency lighting is oil lamps. The nice thing about them, is that you can use just about any flammable fluid you can find in them for fuel.

But you can use just about any type of oil you can find; used motor oil, cooking oil or oil that you render from hog fat.

All of them will burn, offering different amounts of light and different odors for you to tolerate or enjoy. Hmm, I wonder if pig fat smells like bacon?

You don’t want to try using more flammable substances, like gasoline. While gasoline might burn in one of these lamps, it might burn too fast, allowing the flame to travel down the wick into the bowl, causing an explosion.

If you have to try a flammable liquid in an oil lamp and you’re not sure how it will do, run a test first. Fill the lamp bowl 1/4 full and take it outside.

If you have a fire pit, place it inside, so that the walls of the fire pit can capture any exploding glass. Then light it, using a long stick and keeping your body as low to the ground as possible. That will help protect you from flying glass. If it doesn’t’ explode, you’re home free.

Want to improve your medical survival skills? CLICK HERE to find out how.